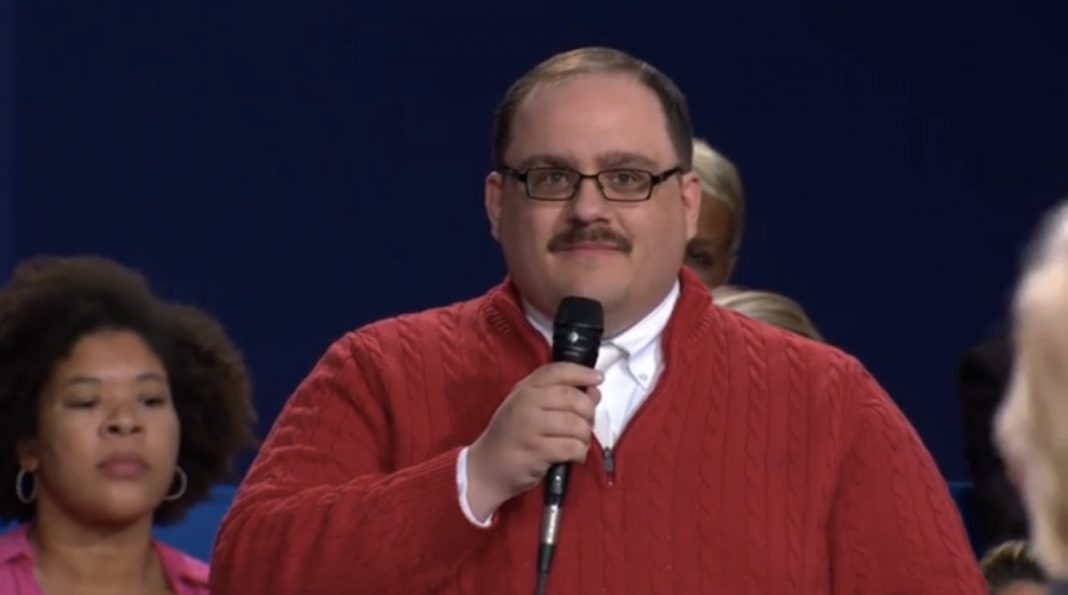 After Kenneth Bone asked a question about energy to presidential nominees Donald Trump and Secretary Hillary Clinton at the presidential town hall debate on October 9, he quickly became a viral internet sensation.

That evening at Washington University in St. Louis, Bone asked, “What step will your energy policy take to meet our energy needs while at the same time remaining environmentally friendly and minimizing job loss for fossil power plant workers?”

Trump responded by touting “clean coal” and bashing what he described as President Barack Obama’s war on energy. Sec. Clinton responded by promoting hydraulic fracturing (“fracking”) for oil and gas as a “bridge” to renewable fuels while also citing climate change as a “serious problem” and that she wants “to make sure we don’t leave people behind.”

Lost in the shuffle of the viral memes, internet jokes, and a Facebook fan page is a basic question: Who is Ken Bone and what does he do for a living?

A DeSmog investigation has revealed that Bone works for the Prairie State Energy Campus, which is co-owned by a consortium of electric power companies and located about an hour southeast of St. Louis in Lively Grove, Illinois.

According to the Chicago Tribune, Prairie State opened in late 2012 and is one of the dirtiest U.S. power plants opened in the past quarter century. Previously, it was partially owned by coal giant Peabody Energy until it sold its five percent stake in May.

“Each year, it will churn more than 13 million tons of heat-trapping gases into the atmosphere, an amount equivalent to adding 2 million cars to the nation’s highways,” wrote the Chicago Tribune. “Most U.S. power plants emitting that much climate-change pollution date to the 1960s and ’70s.”

Prairie State has also been marred by cost overruns, with the plant racking up far higher building costs than originally stated. These cost overruns have led to lawsuits filed against the company by townships such as Hermann, Missouri and Batavia, Illinois.

The company has attempted to dodge compliance with President Obama’s proposed Clean Power Plan, which would force coal-fired power plants to comply with U.S. Environmental Protection Agency (EPA) enforcement of the Clean Air Act for carbon emissions. The company wrote a letter to the EPA in May 2015 expressing its concerns about the proposed rule and also is a petitioner in the energy industry and states’ lawsuit against the EPA, a case which will soon be decided upon by the U.S. Appeals Court for the District of Columbia.

Despite this track record, Bone told The Washington Post, “We’re one of the most environmentally-friendly coal power plants in the world. We’re very recently built.”

The case study of Bone and Prairie State Energy Campus, then, raises another question: How are those who ask questions in the audiences vetted to avoid potential non-disclosure of industry ties and conflicts of interest?

In introducing Bone, co-moderator Anderson Cooper of CNN did not disclose what he did for a profession, but that was standard procedure for all audience members who asked a question. In doing post-debate media interviews, Bone has said he works for a coal-fired power plant company, but media outlets apparently have not asked him about which company he works for.

The Gallup Organization teamed up with the Commission on Presidential Debates (CPD) to choose debate attendees from St. Louis-area residents. CPD is the nonprofit organization founded by Democratic National Committee and Republican National Committee leaders, but ahead of the debate, the Los Angeles Times reported that it remained “unclear how members of the audience will be selected to ask questions.”

“The Commission on Presidential Debates worked with Gallup, a research and polling company, to randomly select uncommitted registered voters from the area around St. Louis, where the debate is being held,” reported the Times. “Uncommitted voters include people who have not made up their minds, or are leaning toward one nominee but could still be persuaded to vote for the other.”

In a videotaped interview with the Belleville News-Democrat, Bone said he was randomly selected to attend the debate by Gallup based on the randomized phone survey the organization conducted for undecided voters, saying he was surprised it did not turn out to be a “dog and pony show” in terms of who gets to ask questions and what he or she gets to ask.

He also went on Anderson Cooper’s CNN show the day after the debate, but the interview focused on his wardrobe, not what he does for a living. On his appearance on Jimmy Kimmel Live, Bone did say he worked for the coal electricity industry and expressed worry about some of Clinton’s proposed energy policies, while also pointing to his fear of Donald Trump’s stances on bread-and-butter civil rights issues like gay marriage. He expressed similar sentiments to The Washington Post.

Bone told DeSmog he went to the debate on his own volition and told The New York Times, “I’m just glad I was able to spark the energy debate a little bit. It was kind of getting overlooked.”

“I got no funding of any kind. I work in coal and I care deeply about the environment,” he told DeSmog. “No one knew my question in advance except the moderators and my wife.”

Bone’s employer also said that he was there on his own, not as a representative for the company.

“Ken attended the event as an individual, and not on Prairie State’s behalf,” Alyssa Harre, manager of public relations and government affairs for Prairie State, told DeSmog. “Ken developed the question on his own.”

While it doesn’t appear to be the case this time, in the past the coal industry has used what’s called third party technique, in which the industry deploys regular-seeming people to speak positively on its behalf.

For example, the industry did so during the 2012 election cycle when Murray Energy had Ohio mine workers appear at a “mandatory” rally (without pay) for Republican Party candidate Mitt Romney.

A senior CPD official said it relies on Gallup do a “process and screen, the details of which [the CPD] does not get into — a similar process for which we’ve been using for many cycles — to identify individuals that are noncommitted.” The official also said identifying the line of work for the person who stands up and asks a question at town hall debates is not something the CPD has ever done.

Leaked Memoranda of Understanding from previous presidential debates offer some clues as to how questioners are selected. The Memoranda are the agreements designed by the two major party campaigns each election season which govern the format and rules of the debates. While typically not released to the public, they were leaked to the press in both 2004 and 2012.

Gallup is first tasked with finding a “nationally demographically representative group of voters” using a methodology which must be approved by both campaigns. Once selected, audience members then submit their written questions to the moderator, who makes sure the questions are roughly divided between foreign policy and national security on the one hand, and domestic and economic policy on the other. The moderator is also tasked with removing any questions they find “inappropriate.”

Finally, the moderator must then come up with a process fulfilling the paradoxical task of both randomly selecting questions and making sure they cover “a wide range of issues of major public interest.” The candidates must approve this process as well.

While it’s not clear if the candidates did or did not sign a written agreement this year, the two campaigns did negotiate the debate rules, and it would not be surprising if they followed a similar process in earlier debates. Janet Brown, executive director of the CPD, told CNN that the moderators would select around eight audience members from a crowd of 40 to ask questions “with the goal of maximizing the number of topics covered,” suggesting the process is little changed from previous years.

ABC News — whose reporter Martha Raddatz co-moderated the debate alongside Anderson Cooper — deferred a query about how those who ask questions at debates are vetted to the Commissions on President Debates and Gallup. CNN did not respond to a request for comment.