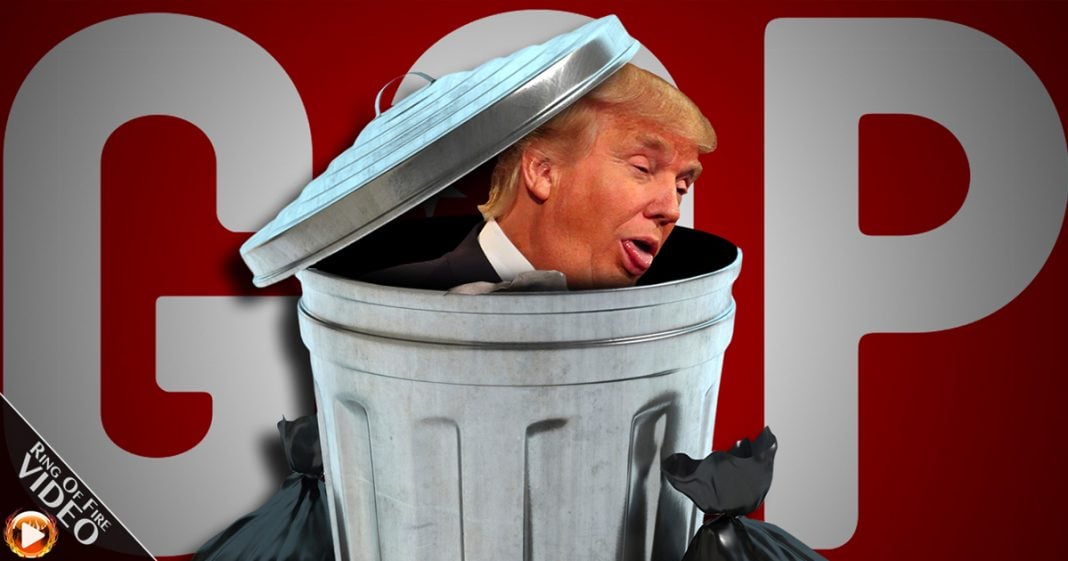 Donald Trump is losing a lot of support among high-profile Republicans, but his latest vulgar comments still fit into the Republican mindset, so why are they abandoning him? Because they know he won’t win and they don’t want to be connected to a loser. The Ring of Fire’s Farron Cousins discusses this.

In case you haven’t been paying attention to the news cycle for the last five days, Donald Trump is experiencing a horrible exodus among his few Republican supporters that he actually had at that point. Trump’s comments about how he would grab women have made a lot of Republicans seemingly uneasy and so they’re now saying, “Look. There’s no way we can support this kind of a speech. We can’t support this kind of attitude, this kind of conduct.” Paul Ryan cancelled an event with Trump over the weekend.

Listen. What Trump said is absolutely deplorable, a horrible thing to say, a criminal thing to do by the way, but these Republicans who are just now suddenly becoming outraged, that’s nonsense. I mean, the guy has been saying things of this nature not just about women, African-Americans, Latinos, Hispanics, immigrants, Muslims, everyone, so why now? That’s the question I want to know. Why now? Why is this the statement that pushed some of these Republicans over the edge? The answer to that is that they didn’t get pushed over the edge. The reason these people are abandoning Donald Trump is because they see that he cannot win an election. They don’t want to be tied to a loser, so they’re saying, “Look, I just can’t support him.” They’re using it as a future campaign tactic.

When they get hammered in their next election, whether it’s House, Senate or if they choose to run for President, they’re going to be asked, “Why did you support Donald Trump?” and now they can say, “I rescinded my support. I did not support his presidency or candidacy,” whatever, “so I’m clean of that issue.” That’s why they’re doing this. They don’t want to be associated with him because they feel it’s going to be toxic in future campaigns. It’s not because they disagree with him. It’s not because they dislike what he said. They see him as a loser who’s not only going to lose the presidency but help them lose campaigns in the future. Look, Republicans have stood by criminals in the past and not had a problem with it.

Mark Foley, Larry Craig, Ted Haggard, people accused of molestation, drug use, being purely hypocritical, it doesn’t matter to them. Laundering money, another one. It doesn’t matter to them. They will stand by somebody if they think it will help them politically. That is why they are abandoning Trump. It has nothing to do with the misogyny or the sexism or the sexual assault. They’re getting away from him because he is a loser. He will not win the presidency and they do not want to be tied to his toxic brand. They believe the same things. They would do the same things if they had the opportunity, but they don’t want it to sink their campaigns in the future. That’s what this is about. It’s not about what Trump said or what Trump did. It’s about saving their own political lives because they believe the same things that Donald Trump does.