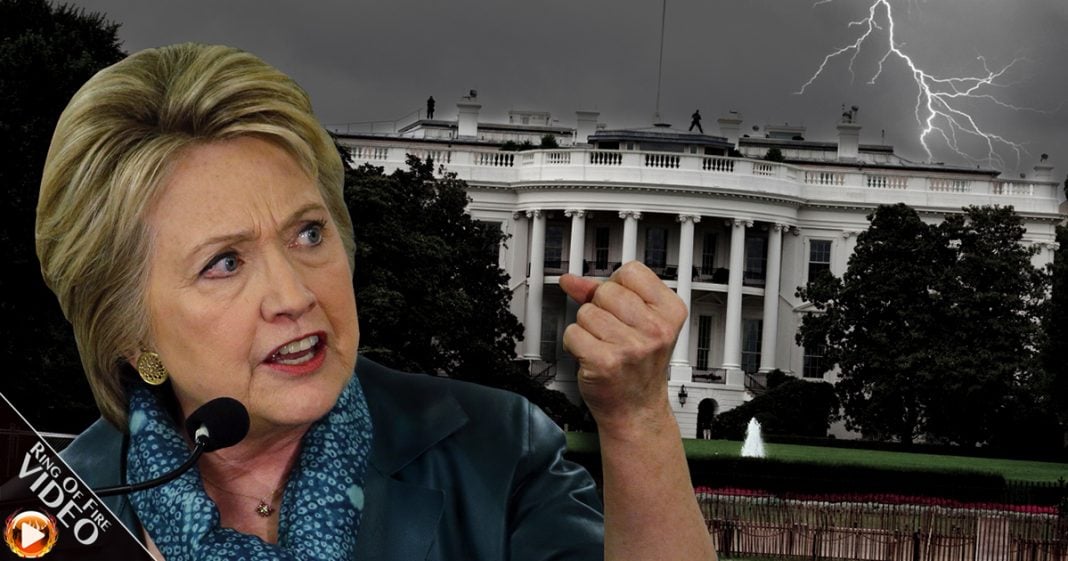 The latest polls are showing Hillary Clinton easily winning the White House, so how can Progressives make sure that we don’t have 4 years of corporatist policies? The Ring of Fire’s Farron Cousins discusses this.

The latest polls show that Hillary Clinton has anywhere between an 11-point and a 14-point lead in the polls nationally over Donald Trump. Swing state polls are coming out showing that she is killing him now after running a very tight race for the last couple weeks. A lot of that has to do with the Donald Trump tapes that came out this past weekend, in addition to Trumps really creepy and bizarre performance in the second debate, as well as his horrible performance in the first debate. Here’s the thing. We are less than a month away from the election. Hillary Clinton has a double-digit lead, a lead that we have not seen in a presidential race in a very long time, and that is because people hate Donald Trump. It’s not because they love Hillary Clinton. Sorry, Clinton people.

That’s the way it is, but here’s the problem I guess you’d call it. Hillary Clinton basically has a 99% chance of winning this election. She is a pro-corporate, anti-consumer mostly, anti-environment mostly candidate who’s going to win the presidency. The question and the fear that a lot of progressive have is how do we hold her accountable? Here’s how you do it. Think about what’s happened during President Obama’s time in office here. He was all for the Keystone XL Pipeline until massive protests and public backlash forced him to back off of it. Then he came out and said, “Look, I’m against it.” That worked. President Obama responded to the will of the people.

Is that going to be enough with Hillary? I don’t know. She is very headstrong, almost to the point of being a little stubborn. She knows what she wants to do and that’s what she’s going to do. Maybe she’ll react to public pressure. Maybe she won’t, but here is what progressives can do to help insure that we can hold Hillary accountable over the next four years. You have to protect those down ballot races. You have to take back the house. You have to take back the Senate because if there are Republican majorities in either one of those institutions, it’s going to give Hillary the leverage to move a little bit further to the right in order to just get things done, play the game in Washington, as they call it.

We couldn’t get everything that we wanted, but we got some of it. Yeah, but on the other hand, you also just deregulated Wall Street because that’s the Republicans and you wanted. That’s what’s going to happen if progressives stay home or if they don’t participate in down ballot races. The house and the Senate is where accountability is going to start for Hillary Clinton. If we let the Republicans keep those houses, those chambers, it’s going to destroy the next four years. We will see no economic policy that’s going to benefit American citizens, average citizens, who don’t fall into the top 1%. We will see no legislation whatsoever regarding protecting the environment and reducing carbon emissions. We’re not going to see any movement forward on healthcare issues or pharmaceutical prices or anything of that nature. We’re not going to see any kind of restoration of the Voting Rights Act.

More people are going to struggle each election to just be able to vote, but not if we take back those two chambers. We can force it from the inside of there along with public pressure from the outside. That kind of pressure coming from all sides is something that a Democratic President, no matter how corporatist they are, will be able to ignore, and that’s what we have to do. That is how we make the next four years better than the last eight years. Things aren’t horrible. They haven’t been horrible over Obama, but they haven’t been better, and that’s what we need to work towards. This isn’t about status quo. This is about let’s make things better.

Let’s get people healthcare coverage that doesn’t send them into bankruptcy. Let’s get people affordable pharmaceuticals so that they don’t have to choose between getting their child an EpiPen or having dinner. Sounds like basic human rights to me. In the United States, we should be the leaders in things like that. Let’s preserve Social Security. Let’s preserve Medicare and Medicaid and unemployment insurance, but we can’t do that if there’s no accountability so we have to stay active, we have to continue to fight. Otherwise, we’re looking at a very long four years ahead of us.