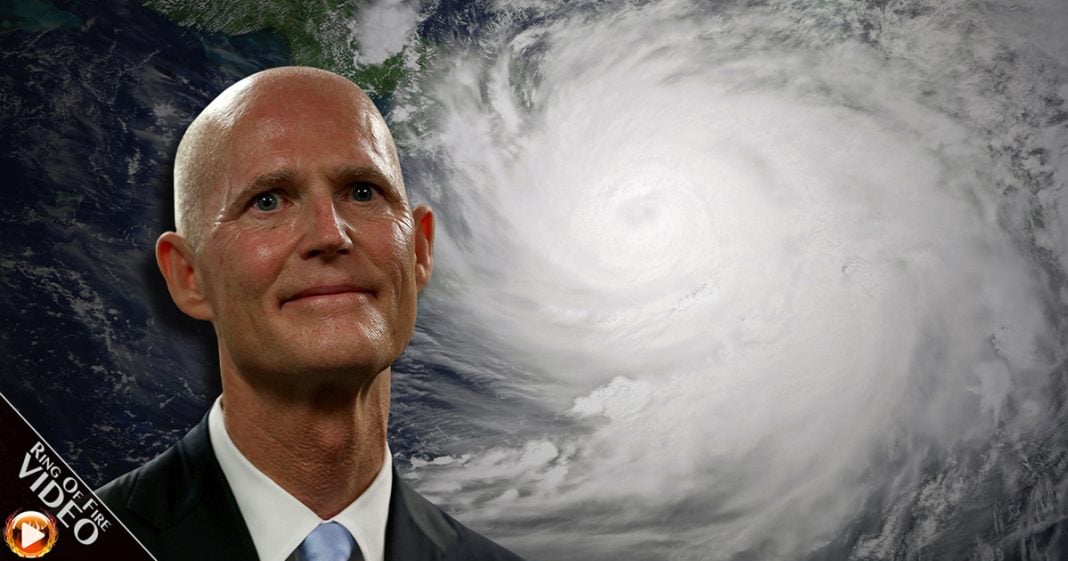 Florida Governor Rick Scott refuses to extend the deadline to register to vote, even though his state is being rocked by a massive hurricane. Could it be because the areas affected by the storm lean heavily Democratic? The Ring of Fire’s Farron Cousins discusses this.

As Florida governor, Rick Scott, was telling people in the path of Hurricane Matthew to evacuate because this storm will kill you, he was also telling the country that, “No, even though the deadline to register to vote for Florida is next week and a lot of people are going to be displaced and their lives in chaos because of this storm, we are not going to go ahead and extend that a little bit to make sure that we allow everyone who has the right to vote the ability to vote.”

That is what Rick Scott has done. Now, as soon as this storm made it’s northward jog, and it became evident that this thing was headed towards the east coast of Florida and all the way up in Florida, one of the things that jumped out of me, as a life-long Florida resident, was the fact that this storm is actually going to help Donald Trump win the State of Florida. Now it’s not going to change voters minds. Whatever response, this will not affect who voters were going to vote for, what it’s going to do is affect their ability to vote.

Their ability, thanks to Rick Scott, to be able to register to vote. Now this storm is going through heavily Democratic areas of the State of Florida, areas that with enough turn out do flip the state either blue or red if the turn out is low, that is what could happen. We are looking at hundreds of thousands of people right now, obviously will be worse as time goes on, without electricity. Homes are being destroyed. Flooding is a huge problem, it’s displacing people, possibly for months maybe even up to a year. Anybody who’s gone through a hurricane understands how long the rebuilding process takes.

When people are relocated, they are not in their homes, their lives are in disarray, the last thing that they are thinking about is, “Oh, I need to go find out where I need to vote now.” That is going to help the Republicans. Hillary Clinton only has a 3 point lead in the State of Florida right now and that 3 percentage points are likely going to be displaced because of this storm. It’s not obviously the fault of the voters. When you have somebody like Rick Scott who wants to make the voting process as complicated as possible, which is what’s happening now, it’s going to confuse people and it’s going to make sure that they are not allowed go cast the vote and that’s what’s so sickening about this.

Rather than reaching out to these people and helping them in their time of need, giving them a little bit of extra time to go register if they need to because the selection is going to have huge ramifications for everyone in this country, he is saying, “No. Sorry you lost your home, you also lost your vote too. Sorry you lost all your belongings, you are going to lose a lot more when Trump takes my state.” Rick Scott and his attorney general, Pam Bondi, are joined to the hip with Donald Trump. They are hardcore Republicans who want to see this idiot win this election and refusing to extend the deadline for people to register to vote, is part of that plan. They just needed something like Hurricane Matthew to be able to put that plan into action.