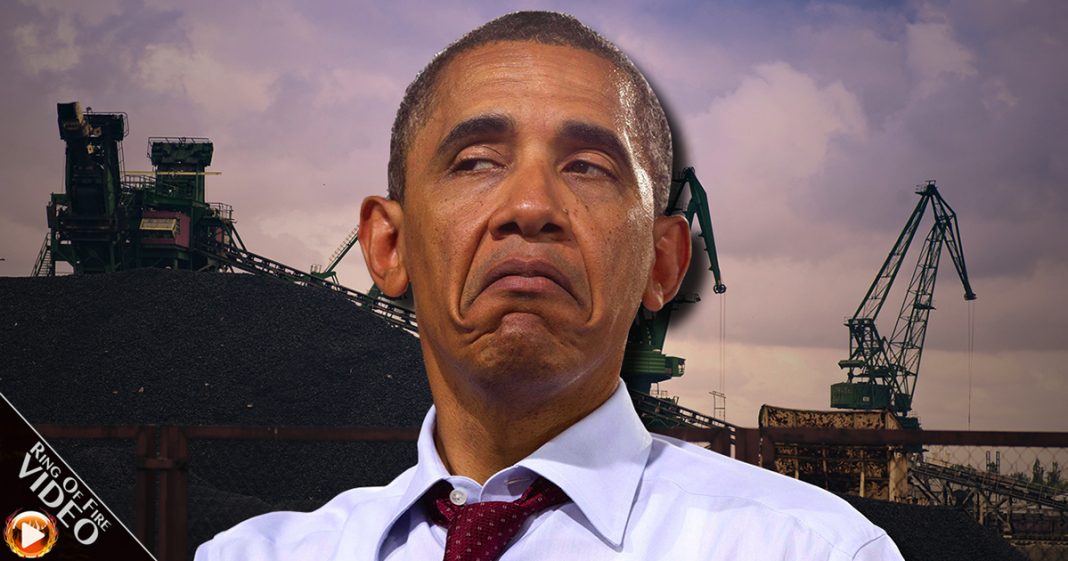 Carbon emissions are blazing out of control, and President Obama is talking a big game on climate change. So why on earth would the government approve a massive expansion in coal mining when they claim to be cutting back on carbon emissions? The Ring of Fire’s Farron Cousins discusses this.

There was big news earlier this week, when it looks like the Paris Climate Accords are going to take full effect. We have more and more countries signing on every day. We’re going to get global in emission reductions. Obama’s out there every single day, talking about the need to address climate change. We had a warning from Dr. James Hanson telling us that emissions are absolutely out of control. We’ve got to do something about it. What does the U.S. government do? They approve a 117 million ton expansion of the largest coal mine in the state of Montana. What this means is that over the next 5 years there will be an additional 160 million tons of carbon dioxide spewed into the atmosphere just from that expansion, at a time when scientists are already telling us, “You can’t release any more carbon.” We have to reduce emissions and work on carbon sequestration and carbon capture, because there’s so much. The U.S. government, led by a Democrat, decides to go ahead and approve even more carbon emissions.

Now federal officials have said, “Look, this is just going to be a drop in the bucket. It’s going to be one half of 1% increase in emissions, so it’s really not that bad. Drop in the bucket.” That is what they said. Here’s the problem. That bucket, that you’re adding a drop to, is already overflowing. We can’t afford any more increases in carbon dioxide. This is one of the dumbest things I have seen come out of the government, probably since Obama took office. This is a Democrat administration decision to expand this coal mine. He can get out there all he wants and talk about how we’ve got to reduce emissions, and climate change is the number 1 threat to the future, but behind closed doors this administration has been overly friendly to the fossil fuel industry. This is not the first time it’s happened.

They’re approving fracking activities in the Gulf of Mexico and allowing those people to dump unlimited, unlimited amounts of poison into those waters. Same thing’s happening off shore in California. Same thing’s happening with the fracking earthquakes in Oklahoma and the expansion of coal mines in Montana, like this one. We’ve already seen it happen in Kentucky and West Virginia. This has to stop, but more importantly the lies have to stop. You cannot sit there and act all high and mighty about climate change like you’re better than the Republicans when your policies reflect everything that they want to do. Mike Pence, in the Vice Presidential debate, mentioned 3 times in the first 5 minutes about his alleged war on coal. A war that even the coal industry admits does not exist. This administration is so terrified of that false talking point, that they have bent over backwards to allow the coal industry to continue to rape our lands and destroy our atmosphere. That’s what we’re seeing with this.

This is a disgusting move by the administration, by federal officials, by anyone who saw this project and signed off and said, “Yep, let’s do it. Let’s put that extra drop in the bucket, even though that bucket is overflowing and it’s probably going to destroy the planet. Who cares, right? The coal industry gets what they want. The only people that suffer are going to be our children, but we’re not going to be around to see them suffer, so it doesn’t really effect us.” I’m sorry, but this is one of the reasons why Hillary Clinton is facing so many problems, especially on issues like climate change. She has been too friendly to these industries, just like Obama has. They can go out there and talk all they want about the need to address climate change, but their policies clearly show that they do not give a damn about the future of this planet.