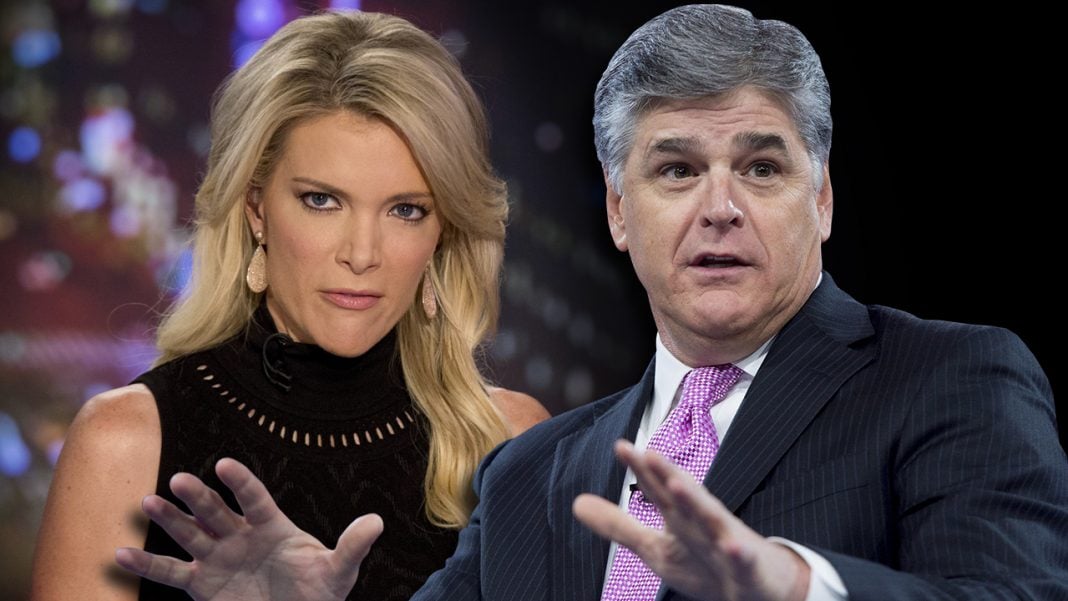 Sean Hannity has officially lost his mind, and is now accusing Megyn Kelly of being a closeted Hillary Clinton supporter because Kelly dared to criticize Trump. The Ring of Fire’s Farron Cousins discusses this.

Sean Hannity once again in the news, the man is very sad, very upset, very angry, very unhinged at his old co-worker Megyn Kelly. Megyn Kelly who most of you remember is the one who took over Sean Hannity’s time slot when the network decided that she’s a bigger draw than he is. Pushed him back into a later hour. Nonetheless, Hannity is angry at Megyn Kelly for daring to tweet out a criticism of trump and Hillary Clinton. Kelly tweeted out the fact that, “Why does Donald Trump always seem to want to talk to Sean Hannity?” Hillary only does entertainment shows, everybody gets softball questions, in a pool and surprisingly accurate critique of both candidates. Well, Sean Hannity lost his damn mind when he read that and accused Megyn Kelly of actually being a closeted Hillary Clinton supporter.

Now, Megyn Kelly, not exactly anybody that you would classify as liberal or progressive but when faced with facts Kelly typically does tend to say, “Okay, you know what? This is the truth. This is not the truth, and I’m going to go with the truth.” It doesn’t happen very often but we did see that with the 2008, I should say, election result, where her and Karl Rove tended to get into a little bit of an argument about who really won that election. Sean Hannity has gone all-in for Donald Trump. He is about his only media supporter at at this point, and if Donald Trump loses it’s going to make Sean Hannity look like quite the ass, and that’s why Sean Hannity is going insane right now for anyone, including his friends, that dares say anything critical.

Sean Hannity is not going to ask those questions, one, because he’s not intelligent enough to understand it, but two, because Trump’s his friend. It’s his buddy. He’s got to protect him, because he’s already made himself look like an idiot for supporting him. As we approach election day Sean Hannity is going to become even more unhinged as his latest little attack on Megyn Kelly proves. It’s going to be hilarious to watch this man lose this last little shred of intelligence and sanity that he once had. Now, he’s never been the beacon of mental wellness, but he is clearly on the slippery slope to full-blown dementia if he thinks that anyone at Fox News actually supports Hillary Clinton.