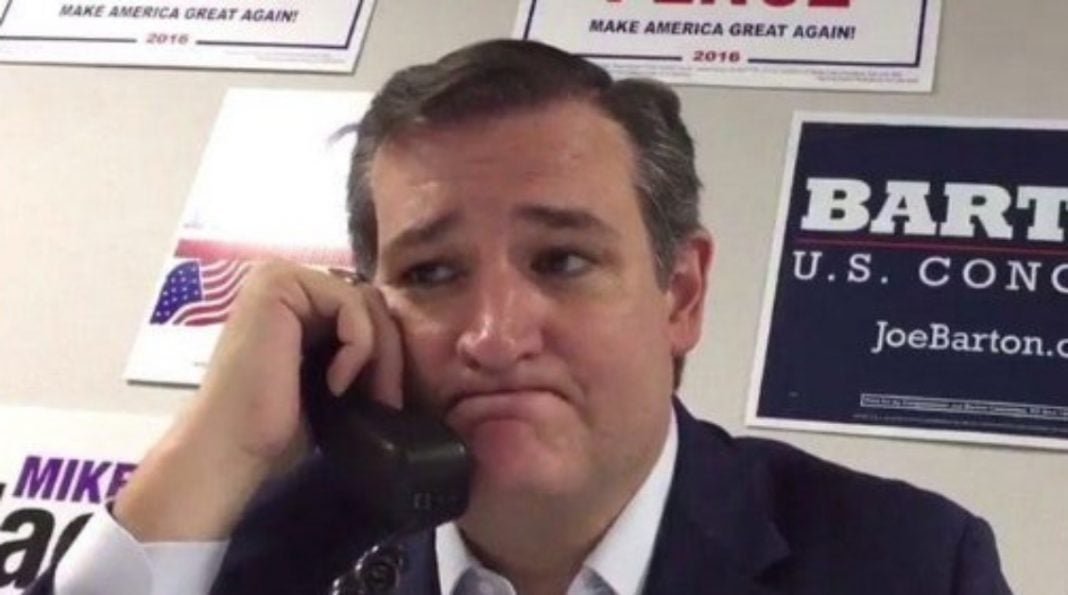 The internet is losing its collective mind over video released by the GOP of Ted Cruz phonebanking for his former opponent on Thursday.

In what may be the saddest moment in the GOP side of the election (next to Christie being called fat by Trump on a national stage shortly after he endorsed the candidate), Ted Cruz was videoed on Thursday phonebanking for the Republican nominee and looking pretty upset about it.

Cruz was apparently trying to set up a nice photo-op, but try as he might, the former candidate couldn’t get anyone to answer the damn phone. Instead, Cruz left several voicemail messages, frowning aggressively the entire time as he entreated the listener to get out the vote.

Cruz looked so upset, we began to wonder if maybe the Trump campaign had his wife Heidi locked up in a bunker somewhere. Or maybe his spunky daughter who had a brief moment of fame several months ago had used her spunky attitude to motivate her reluctant dad to support the nominee once and for all?

The internet had several other theories as to how those calls were going and what might be going through Ted’s mind.

“Yes, the same one he called ‘Lyin’ Ted Cruz.’ Yes, the one whose dad helped kill JFK. No, I don’t know why I’m making these calls either.” pic.twitter.com/cSmyIMgvhs

Others suggested that maybe Cruz wasn’t sad at all but merely using some cool technology.

Is Ted Cruz using a sad boy snapchat filter or what? https://t.co/PoKpfNE3lO

But mostly, everyone just wondered how Ted Cruz could have possibly make the world feel sympathy for him, the most lizard-like of all candidates.

Is Ted Cruz using a sad boy snapchat filter or what? https://t.co/PoKpfNE3lO

Watch him phone-banking for Trump: pic.twitter.com/mlcw2ojGqp