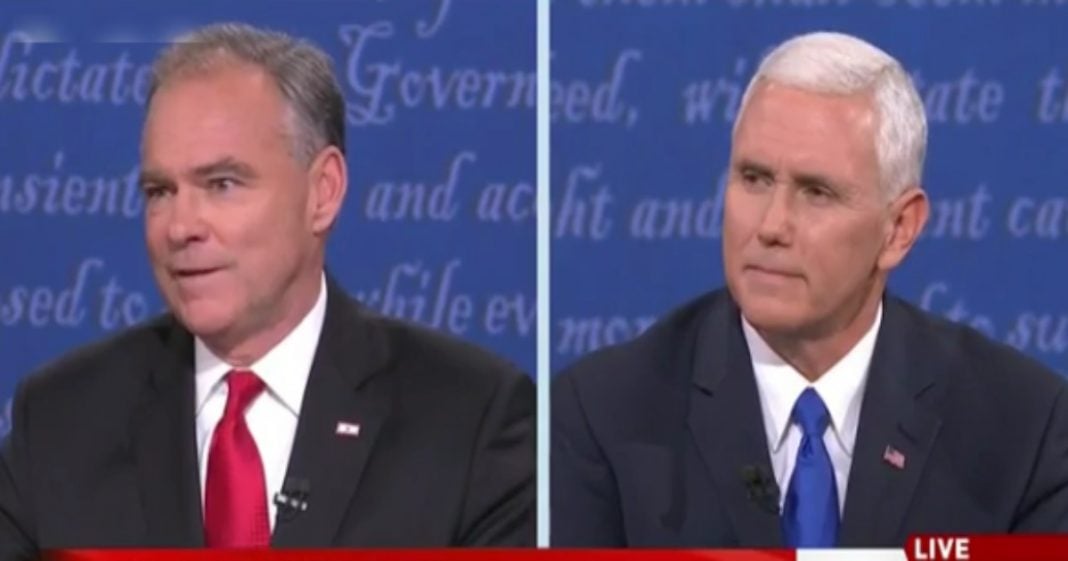 Tuesday evening’s debate was less than impressive for either side as both relatively unknown men grappled with a host of issues, failing to comprehensively cover almost anything, while also appearing aloof and cocky to the American people.

Though we were rooting for America’s step-dad Tim Kaine, his performance often came of smug and rude due his repeated interruptions and sh*t-eating grin. Despite his appearance, Kaine stuck to the truth throughout the debate, hitting Pence again and again on the horrific things his running-mate has said.

Most may have been nodding off while the two men battled, but there was one important moment in the last quarter of the debate which we should all know well.

Both men were asked to weigh in on their religious beliefs and how they affect their leadership. Pence made his way to discussing abortion – a topic candidates often like to stay a safe distance from. This prompted Kaine to bring up his own pro-choice stance on the issue, looping Clinton in on his strong support for a woman’s right to choose.

Though Clinton is no doubt in agreement on that issue, it will not play well for the religious conservatives leaning her way.

Nevertheless, for strongly pro-choice women like myself, hearing Kaine bulldog his way into calling Pence and Trump out for their restrictive view of women was heartening.

“The very last thing goverment that government should do is have laws that would punish women who make reproductive choices. And that is the fundamental difference between a Clinton-Kaine ticket and a Trump-Pence ticket.”

“Why can’t you trust women to make their own decisions?”

That really is the crux of it all. Trump and Pence have run a campaign on deriding, insulting, and belittling women. Trump feels women who obtain abortions should be punished and that wives who work are generally troublemakers. Trump believes that women who aren’t sexually attractive to him are without worth, and he believes the ideal woman is his own daughter.

That’s what you get when you support Trump.