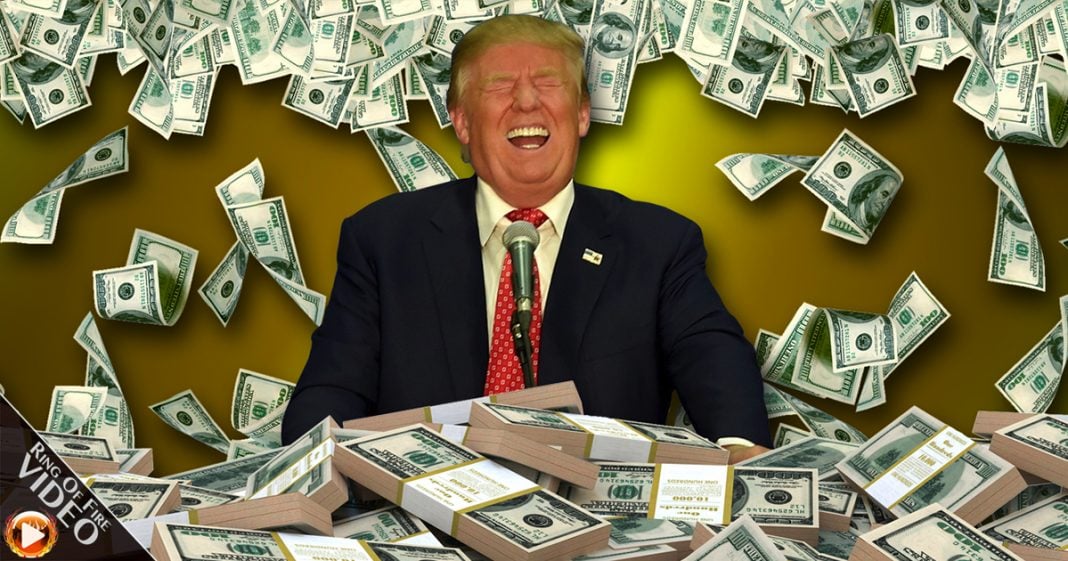 According to a new report, Donald Trump has been funneling money away from his charity into groups that endorse him. This pay-to-play is expressly forbidden from charitable organizations, and it is becoming increasingly clearer that Trump is breaking the law. The Ring of Fire’s Farron Cousins discusses this.

Donald Trump is known for a lot of things, mostly being a pretty horrible businessman and obviously being a racist. According to a new report from RealClearPolitics, he could also technically be a criminal. I know a lot of Republicans want to say that Hillary is the criminal. Look at the emails. Look at the Benghazi thing. Look at her. She’s a criminal. Well, there’s actually pretty good evidence coming out of RealClearPolitics right now to show that, yes, Donald Trump and his charity by way of Trump have broken the law. According to this new report, Trump’s charity steered $286,000 away from charitable giving and towards conservative organizations in an attempt to bolster Donald Trump’s profile as an aspiring politician and to gain the endorsements from these specific groups.

Now, all of these donations from the charity to conservative groups happened between 2011 and 2014 as Trump was rising up in the ranks of conservative politics, I guess you’d call it. Now, here’s the thing. First of all, charities are expressly forbidden from doing this kind of promotion. Second, Donald Trump had not given a dime to his own charity since 2008 and this money was donated from 2011 to 2014, which means that people who gave their money to the Donald Trump Foundation with the intent of having that money spent on charitable actions, instead had their money redirected to boost the profile of Donald Trump, the politician. That is illegal. That is misrepresentation. That is deception. That is breaking the law and that’s what the Trump Foundation has done.

Yet, all we’re hearing from conservatives is what about the Clinton Foundation? Yeah, look. Trust me. The Clinton Foundation has done some pretty nasty things. They have also done some pretty decent things. If an investigation were opened into the Clinton Foundation, I would support it a 100%. Right now, given the evidence, an investigation needs to be opened immediately into the actions of Donald Trump and the Donald Trump Charity Foundation. We need to know what happened. This man is breaking laws and he wants to be the president of the United States. Republicans out there think that he’s an honorable, reputable, great businessman who’s never done anything wrong. This has to be exposed. This needs to be a bigger story.

If we have a presidential candidate openly breaking election laws, FEC laws, charitable giving laws, I would say that’s a pretty massive campaign issue, and so this needs to be addressed. This needs to be covered by the corporate media but they’re not going to. Why? This is a difficult story to tell the ins and outs of. You have to get real specific in explaining what the law says you can and can’t do. The media is just too lazy to do that. If stories like this were bigger, if people were actually covering it and talking about it, we would see Donald Trump’s poll numbers fall even faster than they did after that first presidential debate. Nobody is going to talk about this. Nobody is going to cover it. This is going to be another one of those issues that gets swept under the rug.

I hope, for her sake, that Hillary Clinton brings up this issue at the next presidential debate. Unfortunately she can’t because then Trump is going to throw the Clinton Foundation back at her face. That’s the caliber of the two candidates for the major parties that we have running for president. You can’t attack one guy for doing something illegal because your charity may have been doing similar things. What a time to be alive in America.