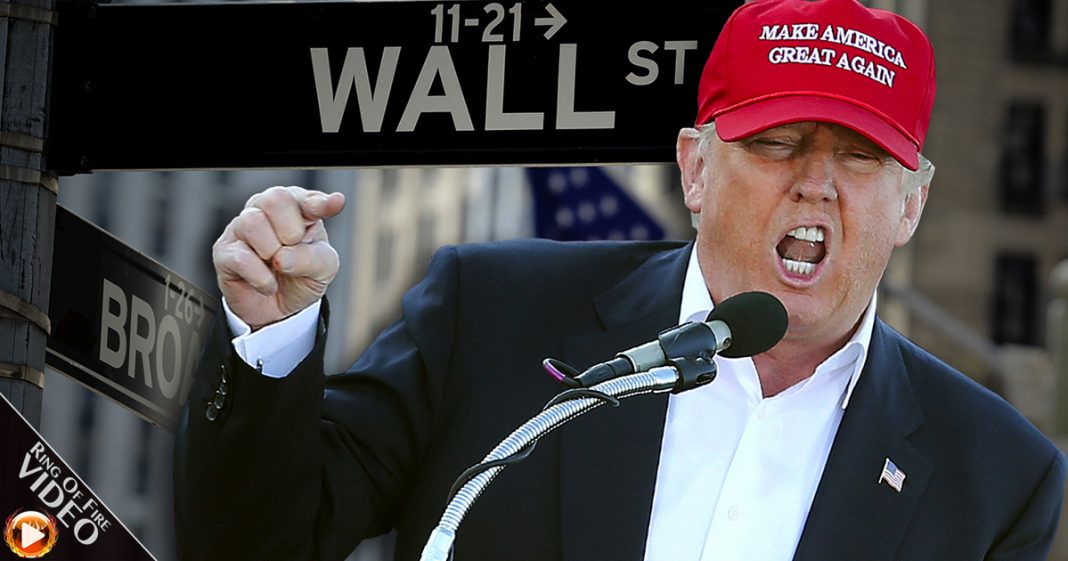 According to a new Gallup Poll, Donald Trump holds a seven point advantage over Hillary Clinton among young voters who believe that the con man will actually be tough on Wall Street corruption. Let’s be clear: Neither candidate will do a thing about Wall Street, and Trump would likely be worse than Hillary. The Ring of Fire’s Farron Cousins discusses this.

There’s a new poll out that actually has some pretty troubling information for those of us planning to vote this year. According to the latest Gallup poll, by a margin of seven points, Donald Trump holds the lead among millennial voters when asked which candidate, Trump or Clinton, will better rein in Wall Street corruption. Seven points, this age group, millennials, 18 to 35, believe that Donald Trump is the one who is going to be tougher on Wall Street.

Let’s get this straight. Donald Trump will not be tough on Wall Street. Hell, Donald Trump’s not going to be tough on any industry in the United States, except when it’s convenient for him and his businesses. That’s what these people need to understand. It’s not just millennials. Voters across the board need to understand that Donald Trump is one of the most selfish human beings that has ever lived, certainly the most selfish human being that’s ever run for president. He is only concerned about himself. He doesn’t care about people throughout this country, probably doesn’t care of the well-being of his own family. He only cares about making more money for Donald Trump today.

If he gets elected, if it’s going to make him some money to be tough on Wall Street, he’s going to do it. It won’t. It’ll make him more money to ease the rules, so he’ll do that. If it makes him some money to fight climate change, he’ll damn sure do it, but it won’t, so he won’t do anything about that. The same goes for income inequality, anything economically related, the housing crisis, public education, roads, bridges, infrastructure, college loan debt … This guy will do nothing about any of it, because he’s got nothing to gain from it. Donald Trump doesn’t care about human beings at all. White, black, Hispanic, gay, straight, lesbian, transgender, whatever have you, Donald Trump doesn’t care. He only cares about himself.

That is what these millennials need to understand. Donald Trump will not be tough on Wall Street. Sure, Hillary won’t be tough either. Maybe that’s just one issue we have to say there’s no winning on this between those two people, so you either go to somebody else, or you move on to the issues that do matter for you, because as it stands right now, neither Trump nor Clinton will do a damn thing to stop all of the corruption on Wall Street.