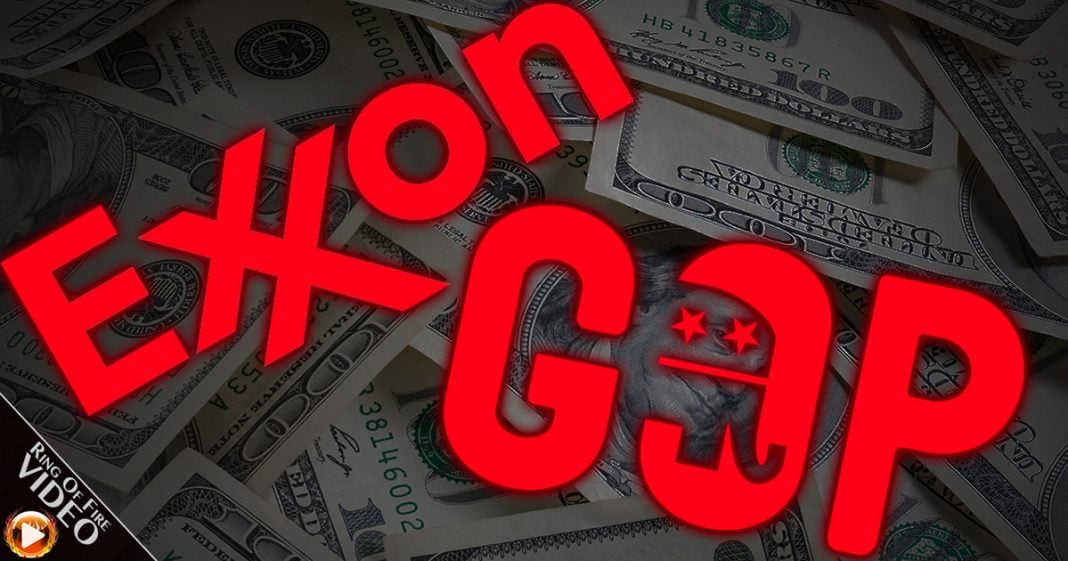 Exxon found itself in hot water not long ago when it was revealed that the company had known for nearly 40 years that they were destroying the climate with their emissions, and now state attorneys general want answers. But Republican AGs are meeting with Exxon’s team of lobbyists to help stop these investigations before more damaging information comes out. The Ring of Fire’s Farron Cousins discusses this.

Several months ago it was revealed that Exxon Mobile had known about the dangers of climate change, due to the emissions that their corporation was releasing, since at least, the 1970’s. Some documents even suggest that they were actually worried about their emissions and the effect it was going to have on the atmosphere as early as 1948, but, they knew for certain that this was happening in the late 1970’s … Thirty years after they were first concerned about it, and, 40-some odd years before they actually, publicly admitted it.

As a result, state attorney generals from all over this country started launching investigations into Exxon to try to figure out what they knew, when they knew it, and what kind of action can be taken because they covered it up. They paid money to organizations to cloud climate science, and, so, basically, state attorney’s general want some answers here. Exxon is terrified of what is going to come out as a result of these investigations, so they’re reaching out to their good friends. Republican Attorneys General. Recently, according to the Center for Media and Democracy, Exxon sent a team of lobbyists to a meeting of Republican Attorneys General in order to help prevent any further investigations in the states that are controlled by a Republican AG’s.

Florida, places like that … bigger states, Republican controlled, they want to make sure that these guys, these heavy hitters, do not get involved in these climate investigations. Here’s the thing … and, a lot of people miss this about these investigations. As of right now, no monetary damages are being sought. It is incredibly difficult to prove that the carbon emissions from Exxon Mobile are directly the cause of a particular deterioration in the atmosphere. You really can’t do that. We know that that happens, but you would have to prove that it was Exxon-specific emission from this point, from this plant, into the air that killed this point of the atmosphere. You really can’t prove that, definitively beyond a reasonable doubt.

Anyone who drives a vehicle has probably, as long as his vehicle runs on gasoline, at any point in your life, has probably ended up purchasing gasoline from Exxon. Whether we wanted to or not, it’s just a fact of life when you drive an automobile that still requires gasoline. We’ve given them money, and, that money, in turn, is being spent to cover up the damage that this company has caused to our environment … At this point, irreversibly, and we’re all going to have to live with those consequences.

As customers, as consumers, not even as citizens, but as consumers of this company, we are entitled to know where our money went. What did you spend it on? Did you spend it to damage my future? That’s what we’re trying to find out here, but, Exxon has billions of dollars. They, I can promise you, will spend every last dime that they have on lobbyists and politicians in order to make these investigations go away, and, that’s what we’re seeing happening right now as they reach out to these Republican AG’s, trying to stop the flow of information in the United States. They don’t want you to know what they’ve been up to, and, that’s why we have to know what they’ve been up to.