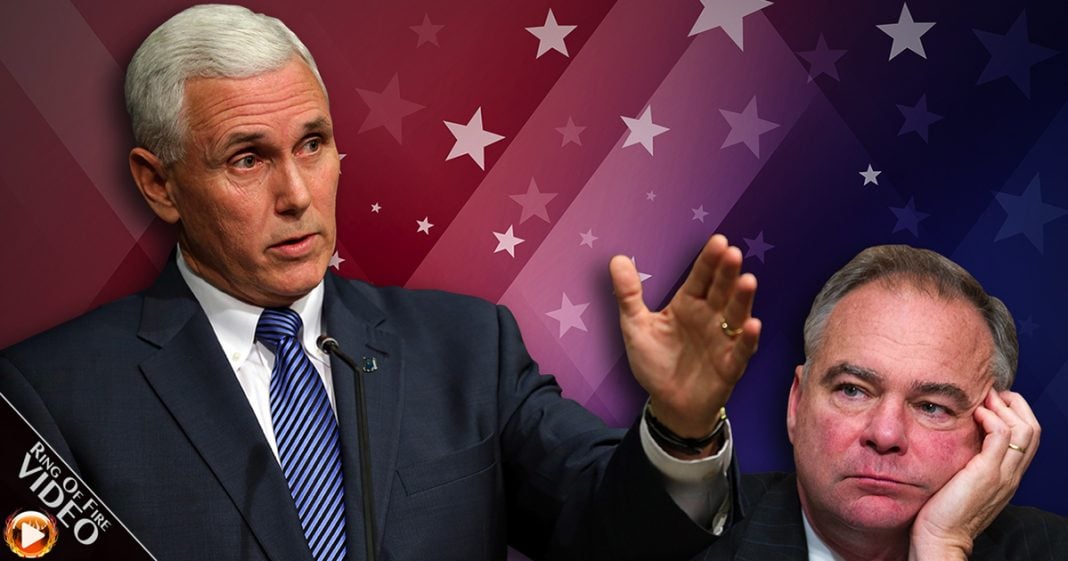 The vice presidential debate is upon us, and this will be the first time that most people have ever taken a close look at both Tim Kaine and Mike Pence. Pence has a record of being a far right zealot, so could his hard right philosophy be enough to derail Trump’s “outsider” image? Let’s hope. The Ring of Fire’s Farron Cousins discusses this.

Tonight is the night that everybody has been anxiously waiting for probably since the very first person announced that they were going to be running for president. It is the vice presidential debate tonight. In case you forgot, that’s going to be Tim Kaine on the democratic side, and Mike Pence on the republican side. Both men have been relatively quiet, relatively ineffective, relatively useless throughout this entire campaign cycle, and it’s pretty much a guarantee that tonight’s debate is going to suffer from record low ratings. No offense to the candidates. They’re both just very boring people. That is the only reason that Mike Pence is not getting more scrutiny these days.

You see, Donald Trump started his campaign telling people that he was this outsider. He wasn’t an establishment politician. He’s this new breed of no experience, no intellect kind of politician that’s going to come take over the system. Mike Pence is an insider. He is a hardcore, hard right republican who really is just as dangerous as Donald Trump, but again because he’s not as openly loony as Donald Trump, he has not received the same kind of criticism, so let’s take a few seconds here to go over some of the crazy things that Mike Pence actually believes, things that if journalists had any integrity, they would be asking him tonight at the vice presidential debate.

For starters, he does not believe that businesses should be prohibited from discriminating against gay people. The LGBT community under mike Pence in Indiana, he has passed these discriminatory laws that say if a business doesn’t want to serve you because you’re gay, hey, that’s the business’s choice. You go on, you find somewhere else to go.

Adamantly, 100% against abortion of any kind, even in cases of incest and rape. It’s the mother’s job. She probably shouldn’t have been raped. She’s got to carry that baby to term.

What else do we have here? Education. This is a big one, because this is an issue that’s obviously not getting enough coverage in this election. Mike Pence diverted millions of dollars away from public schools in the state of Indiana, and instead gave them to corrupt, private charter schools in the form of school vouchers. We’ve seen this play out many times in states. Sam Brownback did it in Kansas when he helped destroy that state’s economy. Basically it starves money away from public schools, sends it to these charter schools that are a massive scam, as the Center for Media and Democracy and the Progressive Magazine have reported time and time again. They give a lot of campaign money, so Mike Pence was sure as hell right there to give them even more money, so that they could continue operating, stealing tax dollars away from children or teachers here.

The environment. Again, Pence does not believe climate change is happening. He thinks it is a hoax. He’s right along with Donald Trump on this one, and we’ll see tonight if the moderator actually has the guts to ask Pence about Trump’s Chinese hoax tweet that he had sent out and subsequently deleted during last week’s presidential debate. It’s going to be interesting to see where that … If that question surfaces tonight.

Trade, Mike Pence is a huge supporter of the TPP.

Guns. He thinks everybody should have a gun. You can fire it willy-nilly, what does it matter?

This guy is the textbook, typical, standard, establishment republican. Now, what this could do, again, if we have somebody asking questions that has any courage, or morals, or standards whatsoever, is that it could kill some of Trump’s support. I know since the presidential debate, Trump is losing support all over the place, but he still has support from people who genuinely believe that he is an outsider. Most people do not know about Mike Pence. They don’t know about Tim Kaine either. Once they see that Trump fell right in line, and picked this kind of insider, who is full of hatred and corporate giveaways, they may reconsider their support of him.

On the other hand, this could shore up a little bit more republican support, and stop the bleeding from the Trump campaign in terms of republicans leaving, or saying that they will not support him. Mike Pence is the kind of establishment republican that might be able to bring a few of those people back, or at the very least, prevent a few more from leaving. Now, is it going to be enough to move the poll numbers? Probably not. Vice presidential debates typically do not have much bearing on polls whatsoever. If you do watch tonight, pray that good questions get asked. Pray that this crazy guy gets exposed. Don’t expect any of that to happen.