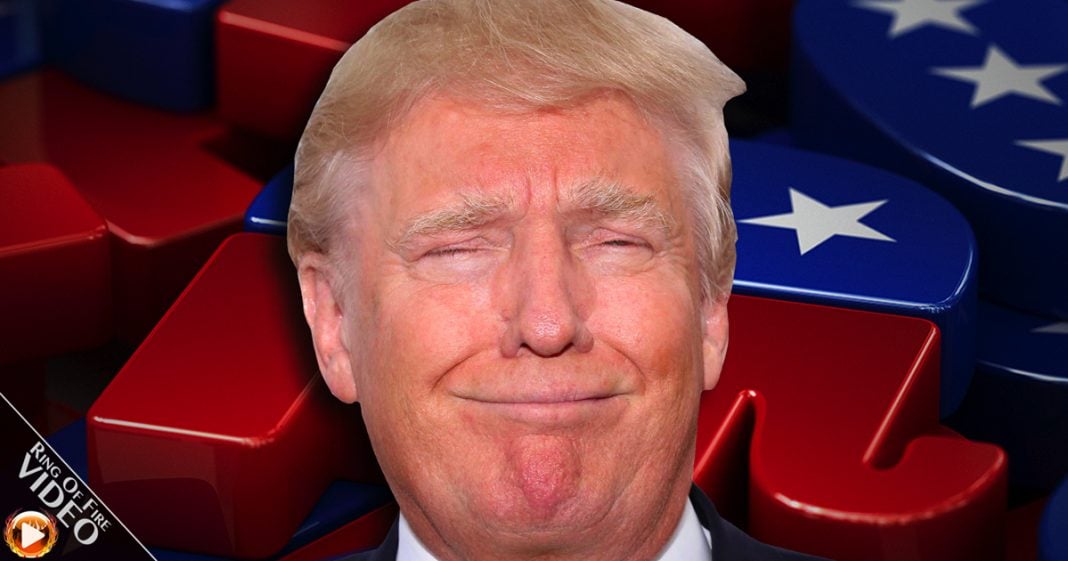 When you look at some of the real estate deals he’s made, and the casino deals, and all of that, the Trump University, Trump Airlines, all of that is a result of deregulation, again a Republican policy. Donald Trump, and people like him, are the only people in this country that benefit from Republican policies, tax cuts, deregulation, trickle-down economic theory. It’s these people. It’s the Donald Trumps, and they felt empowered, and that’s why you have an idiot like Donald Trump running for president, thinking that he’s entitled to this office as well. That’s the problem with Republicans. It doesn’t matter what happens to average citizens. It doesn’t matter what actually happens to workers in a factory, or workers at a hotel, or students going to a university. All that matters is what happens to the wealthy people who keep the Republicans in power.

Donald Trump, in addition to being the embodiment of the latest evolution of the Republican Party, is what happens when Republican policies come to life in a human form. Look, this election is not about substance whatsoever, but it could be if Hillary Clinton were to take the lead, or Jill Stein or Gary Johnson for that matter, were to take the lead and explain the link between Republican policies and Donald Trump. I think we could be looking at a very different campaign here, not just presidentialy, but further down the line.

Paul Ryan has been out trying to act presidential, trying to act like a leader for the last few months, telling the American public that we’ve got to reform this tax code. We’ve got to ease the tax burden on millionaires and billionaires. We got to get rid of these horrible government regulations that are killing our jobs, but in reality, what he’s doing is trying to make apologies for the way Donald Trump is, for the way that the Koch brothers are, for the way that Sheldon Adelson is, because Paul Ryan’s proposals here are nothing new. It’s what the Republican Party’s been doing since the 1980s. Yet, he’s still trying to sell this as a new idea.

What it really is is it’s going to create a new generation of millionaires and billionaires who have absolutely no empathy, no regard for their fellow human beings. They just know one thing, the obsessive pursuit of money. They know how to buy politicians, and they know how to get exactly what they want while screwing over everyone else in the process. That is what Donald Trump is. That is what the Republican Party represents, and that’s what we can expect as long as these idiots keep pushing these failed Republican policies.