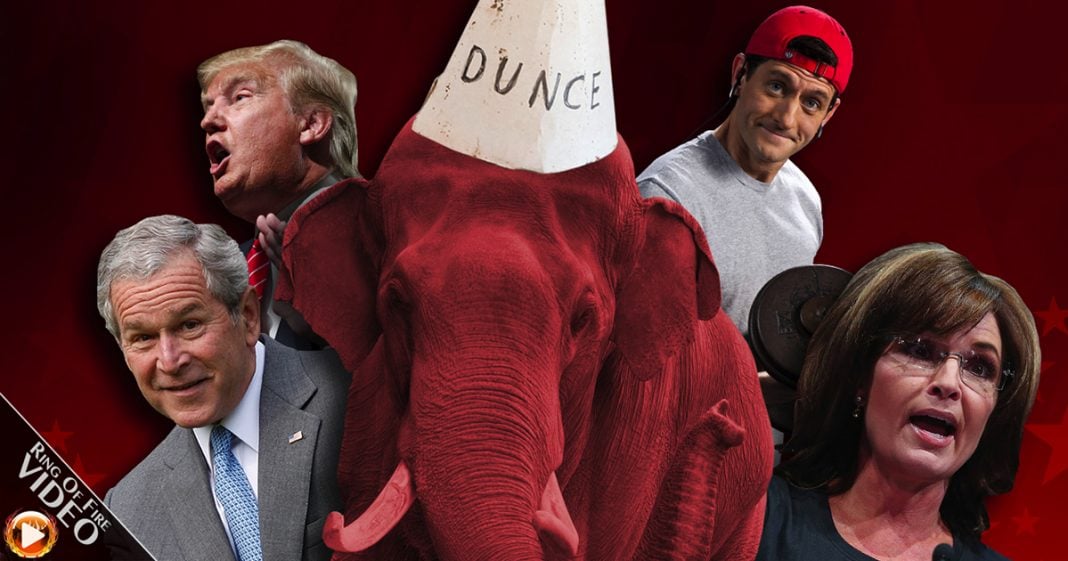 Democrats love to argue with one another about when exactly the Republican party became so stupid, I guess, is what you would call it. Did it happen with Richard Nixon and Watergate? That was more criminally evil than anything else. I don’t know that you would call him painfully stupid. Was it Ronald Reagan? You know, his astrologers, the jelly beans. Was Ronald Reagan the one that put the Republicans on the path to stupid?

Well, hard to say from my end. I was 6 years old when Ronald Reagan left office. I don’t really know what the caricature of Reagan was during the time when he when he was President. What I do know is that we can see very clearly, George W. Bush as a turning point for the Republican party. That man was painfully ignorant, had no business being President of the United States for 8 years. He certainly had a lot of help from voter suppression, voter purges, and the Supreme Court in order to even win that election in 2000.

The bottom line is that his presidency represents a very clear turn for the Republican party. At least with Nixon and Reagan you had the rest of the party that still seemed to have their wits about them. They understood how things worked. They understood what to do to be effective in Washington; whether for good or bad, they were still effective. It was during George W. Bush’s term that that shift happened. After George W. Bush left office, we end up with people like Marco Rubio, Ted Cruz, Louie Gohmert, Jim Inhofe seem to go way off the reservation during the Bush years, and beyond.

You have to wonder, did George W. Bush presidency signal the turning point for intelligence within the Republican party, because I absolutely think it does. Then when you look at the fact John McCain picked Sarah Palin, we all know about her level of intelligence. Mit Romney picked Paul Ryan, who at the time made Sarah Palin look like a genius. Then today we have Donald Trump. Things are getting dumber, and dumber, and dumber.

Ben Carson, great surgeon, stupid human being. Carly Fiorina, horrible business leader, not that smart. Everybody else that took the stage during those republican debates, perhaps with the exception of Rand Paul’s social beliefs, his political beliefs, horrible. Everybody else was just either stupid, or evil. That’s what we’re left with with today’s Republican party.