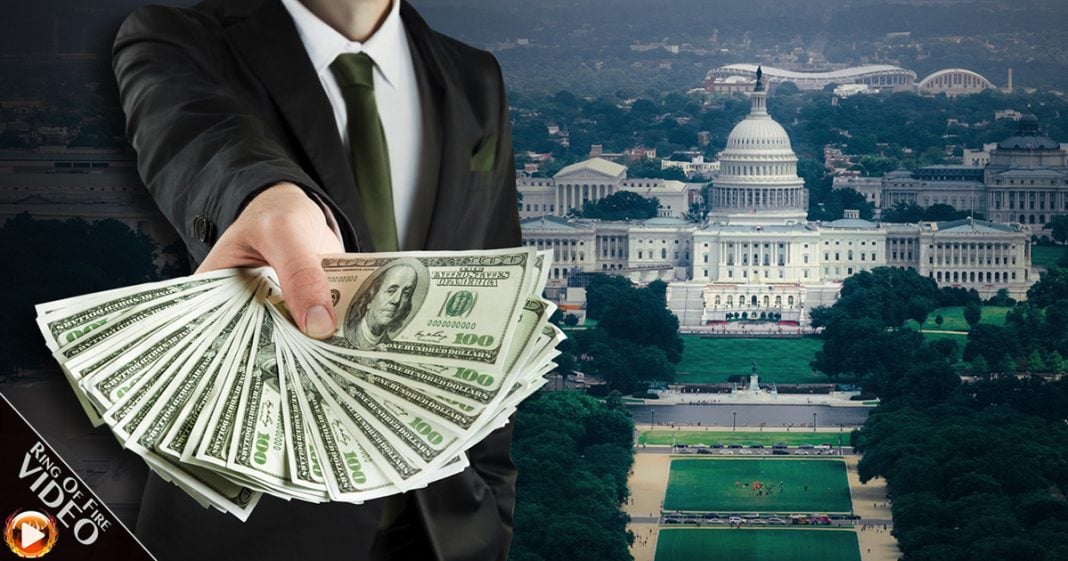 Yes, Hillary Clinton is taking a lot of corporate money. And yes, it is a problem. We can’t abandon our principles just because Democrats are now on the receiving end of corporate money, and we need to be very worried about the amount of money Hillary is receiving. The Ring of Fire’s Farron Cousins discusses this.

If you were to pinpoint any one thing that clearly define the campaign of Senator Bernie Sanders, it would be, “Get money out of politics.” Essentially, “Take away control of our democracy, take it away from the top 1% and give it back to the 99%.” This all comes down to “get money out of politics.” That is a campaign message that not only do a majority of American citizens believe, both Democratic and Republican, but it is a campaign message that everyone in the Democratic Party used to agree on. We’re seeing something very odd, very different and very unsettling happening right now within the Democratic Party. Hillary Clinton is obviously getting a lot of corporate campaign money.

We have seen the big banks, Citibank for example, send a memo out to executives to assure them that, “Hey, things are going to stay just fine under Hillary Clinton. She’s going to preserve the status quo.” Hillary Clinton is the third top recipient of money from the oil and gas industry in this entire election cycle, certainly the highest of the presentation candidates, taking a lot more in from Donald Trump, and a lot of oil and gas money is also flowing to the Democratic National Committee as well. There was a time, and this was a time, I’d say, 2 years ago, when the Democratic Party actually cared about money and politics and they understood that it was a corrupting force, regardless of who those checks were being written out to.

They knew that money and politics had to go, but at the time, I’m guessing now, they only thought that because they weren’t the ones receiving most of the corporate money because what we’re seeing in this election cycle is more corporate money than ever going to Democrats. Yeah, there’s still a lot flowing to Republicans, but the Democrats are now getting equal share in some areas, and in some areas, they’ve flipped industries. Industries that used to be solidly Republican in their giving are now giving more to Democrats, so suddenly, it’s not so bad. It’s not a campaign issue anymore. We don’t need to campaign to get money out of politics when all the money’s coming to us. It didn’t change. Nothing changed with the corrupting influence of money. What happened was that the Democrats got corrupted by the money.

Exactly what they predicted would happen 2 years ago, 3 years ago, 5 years ago happened, but it happened to them. They lost sight of what they believed in that quickly. As soon as those checks were written, they suddenly stopped caring. They suddenly didn’t think it was a campaign issue. Here’s the problem. There are a lot of liberal writers, bloggers, authors, whatever you want to call them out there, making excuses, writing this off as not a big deal, people who spent 8 years during the Bush administration talking about the money that Cheney and Bush got from Haliburton and how that affected their policy decisions. Now, suddenly, since the money’s going to the Democrats, “Well, it’s not a big deal. I mean, Republicans do it. Democrats can do it. Hey, we’re using their own system against them. Isn’t that great? Let’s cheer them on.”

No. No candidate should be taking corporate money. That should be illegal, but it’s not. As long as we end up with Democrats who are so easily corrupted, this will never change. Corporations have won, unfortunately. I hate to say that, but they’ve won. They’ve written the checks and that money did exactly what they wanted it to do. There are only a handful of people in Washington, D.C. representing this government that can be trusted. Bernie Sanders is one. Elizabeth Warren is one. Keith Ellison is one.

It’s hard to find a lot of names beyond that. There are a few, but there aren’t many. The few that you can name are because they’re willing to stand up to that corporate power. They’re willing to say, “No” when a big bank opens up their checkbook, and that’s something that I think the Democratic Party has lost sight of, and we need to take it seriously. It doesn’t matter who the money goes to. That money is always given for one purpose, and that is to have greater influence over our democracy.