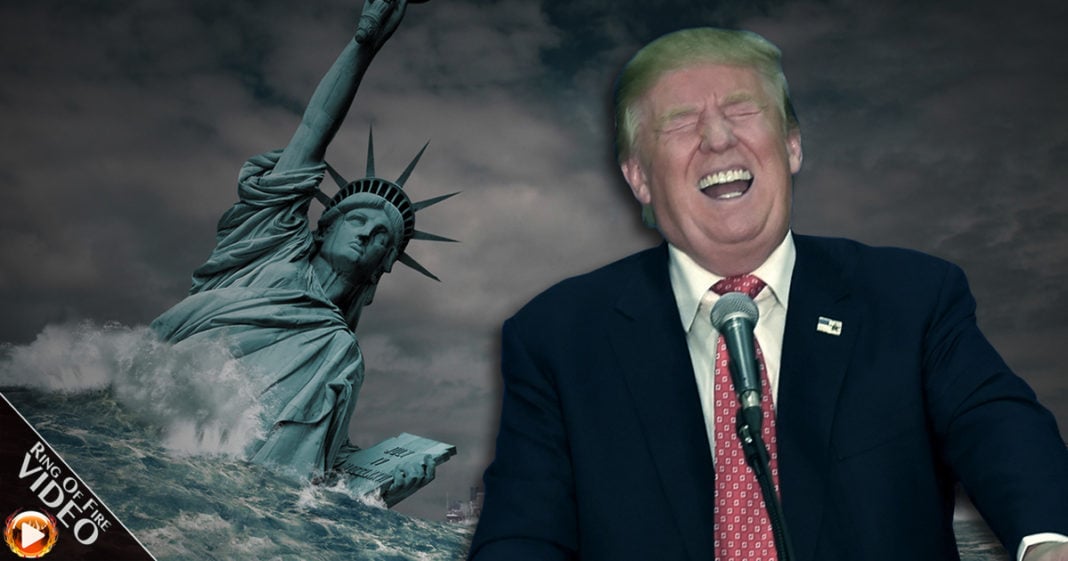 Donald Trump’s transition team is just as bad as you’d expect – climate change deniers, industry insiders, lobbyists – you name it, they’re there. The Ring of Fire’s Farron Cousins discusses this.

It’s no secret that Donald Trump does not believe that climate change is real, he has said that it’s a hoax. He’s even said that it’s actually a hoax perpetuated by the Chinese. What their goal of it is, we don’t really know, but that’s what he said, so, sure, whatever. Donald Trump has started picking his transition team now, and hopes that he thinks that he might actually end up winning the White House, but one of the people that he has picked to lead the EPA transition, Myron Ebell, is a top climate change skeptic. Those who follow climate change and the misinformation campaigns very closely, have consistently rated Mr. Ebell as one of the top climate change deniers in the country, according to Grist and a couple of other places.

Now, here’s the problem. This obviously is the person that he’s picking possibly to even lead the Environmental Protection Agency, but as a of right now, just kind of picking who’s going to be in charge of the EPA. Now, President Obama accepts that climate change is real. He understands science, he sees what scientists say, and says, “Yep, I agree, because you know more about this than I do.” Donald Trump obviously does not. This guy Myron Ebell doesn’t accept that kind of science, but here’s the problem, Obama, even though he accepts it, has done very little about it. Like I’ve said before, for every step forward, we are taken 2 steps back. Now, how bad is it going to be when we have someone in the White House and someone in charge of all these different federal agencies, the EPA, the DOE, all of them.

What happens when we have people in those offices who actually don’t believe in climate change? Not only will there be no forward progress whatsoever, but they are going to allow corporations, oil companies for the fracking industry, to go out there and absolutely destroy the environment, pump as much CO2 as possible into the atmosphere. All because they don’t believe the scientists. Has nothing to do with energy independence at this point, it’s mostly out of spite, that’s why they’re doing this. They understand that right now energy prices in the United States are actually falling, they have been since President Obama took office. Gas prices are literally half what they were when George W. Bush was in office.

On top of that, the energy extracted in the United States does not stay in the United States, it goes and gets sold on the world market. All this talk about energy independence and United States being, you know, using our own energy sources, is an absolute lie because that’s not how it works. Donald Trump wants to put, not only climate change deniers, but industry insiders running government organizations to help destroy all of the progress that President Obama has made on climate change, the Clean Power Plan, and things like that, even though again, not that great, still better than nothing. They’re going to reverse those gains, they’re going to pump more CO2 into the atmosphere, they’re going to let the industry run rampant all over this country, all because they’re too stupid to understand what scientists are saying.

The plan’s in a lot of trouble right now. I mean, you can walk outside literally and see what’s happening right now. Donald Trump, this great fore-populist personality that he’s kind of developed over in the recent months, wants to hand all of this over to the oil industry, and tell them, “Do your worst, it doesn’t matter, climate change is a lie.” That’s what we could expect from a Donald Trump administration, and to be honest, I don’t care where you stand on Democrats, and Progressivism, and Liberalism, this country cannot afford 4 years of Donald Trump’s destructive anti-science agenda.