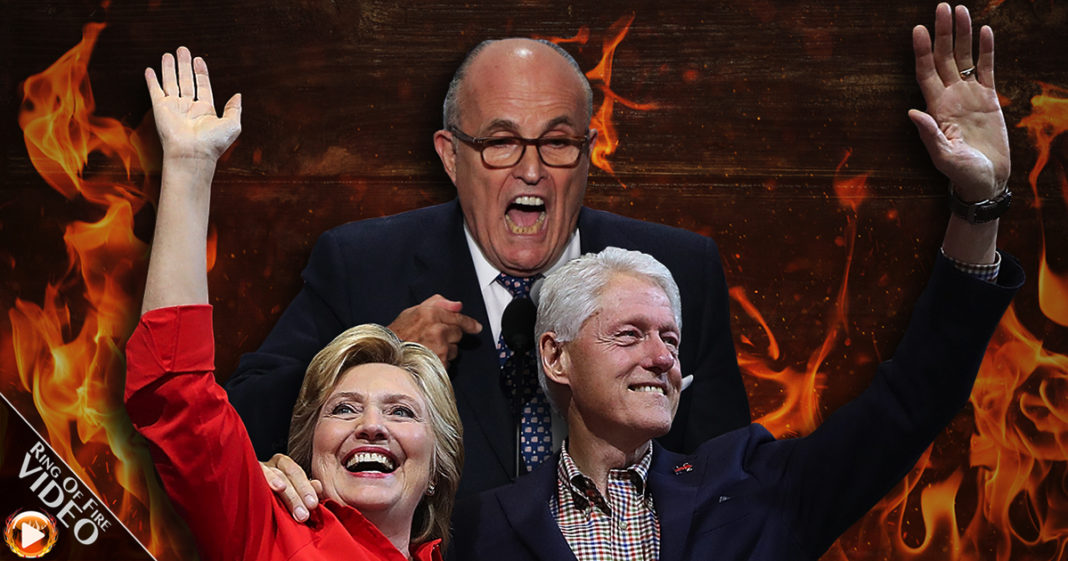 With Donald Trump rallying his supporters to attack Hillary Clinton over her husband’s infidelity, Rudy Giuliani has answered the call in grand, preposterous fashion, claiming she’s unfit to lead for staying married. Do these men truly think these are the important “issues” this election? The Ring of Fire’s Farron Cousins discusses this.

In the midst of all the post-debate wrap-up, I guess Rudy Giuliani was feeling a little left out. You know, the whole world got to see how stupid Donald Trump was, but nobody was paying attention to poor little Rudy Giuliani. After the debate, in an interview, Giuliani made the claim that Hillary Clinton is just too stupid to be the President of the United States, not because she necessarily doesn’t know things, but she’s stupid because she stayed with Bill Clinton after he had his affair. Now, Republicans, we’ve said this before, they’re going to continue to try to bring up this Lewinsky thing and make it a 2016 campaign issue, even though the issue’s been settled for almost 20 years, and after his impeachment, Bill Clinton’s approval rating actually shot through the roof. Left office with one of the highest approval ratings in modern history. Actually, the highest in modern history, one of the highest throughout presidential history.

Probably a bad move, but what’s even dumber for Giuliani is to question Hillary Clinton’s role as a wife, as a mother, as a political figure in staying with her husband. That is truly one of those things that’s none of our business as the public. We don’t know how they worked it out. We don’t know if they went to therapy, or if they were in therapy four times a day. We don’t know if he apologized, if he’s truly sorry, because you know what? It doesn’t matter. That’s not our business. What is our business is knowing that Hillary Clinton did come through that. Didn’t let it take her down. Didn’t sink into a depression, at least publicly. Who the hell is Rudy Giuliani to say that she’s too stupid to be president because she stayed with Bill Clinton? This is absurd.

In the same breath, Giuliani claimed that Donald Trump was the real feminist in this election, the same guy who loves making fun of women if they put on a couple extra pounds, loves making fun of them for the way they look, the way they dress, the way their genetics are. This election has become so sickening. It’s not even about issues at all. Giuliani is out there making an ass of himself about things that he doesn’t even understand. Look, I get it. If you think Lewinsky’s a campaign issue, then I pity you. You’re the kind of person that’s not intelligent enough, probably to even vote, but what happened between Bill and Hillary Clinton, I don’t care how you feel about any of the candidates or what party you’re with, that is not our business. That’s not a campaign issue, and that’s certainly not something that anyone in this country with a shred of dignity or intelligence should base their November vote on.