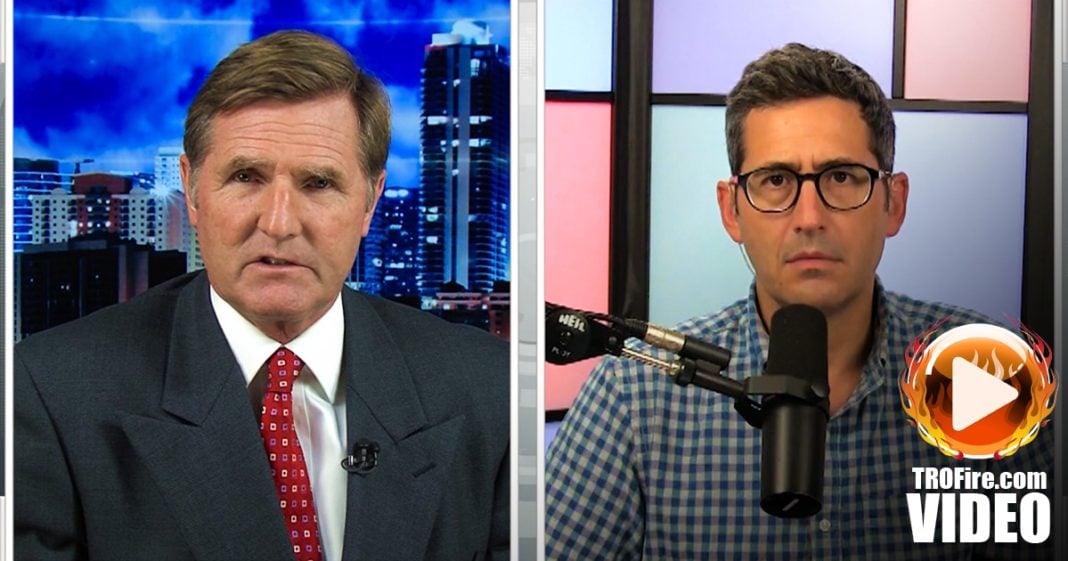 In a shocking display of bipartisan unity, the Senate has overruled President Obama’s veto of a 9/11 bill which would allow victims of the terrorist attack to directly sue the Saudi Arabian government. Ring of Fire’s Mike Papantonio and Sam Seder discuss this.

Seder: Let’s talk about another story that is getting equally virtually no attention this week, and look, the fact of the matter is, we have a very consequential election going on. We’re four or five weeks out, but one would think that there would be a little bit of time to talk about this, because in some ways, it is caught up in the election. It’s certainly caught up in a broad range of topics, and I don’t know if this is the first time this happened in Obama’s tenure, but we saw … In fact, I think it is the first time.

Papantonio: It’s the first veto override, yeah. It is.

Seder: He has had twelve vetoes if I am not mistaken, and this is the first, like you say, the first one that has been overridden.

Papantonio: I’m so glad. Sam, this needed to be overridden. This should be an embarrassment, frankly, to Obama. Now, here’s what people don’t understand.

Seder: Tell us what the legislation is.

Papantonio: Here’s the deal. The bill says that a citizen, it could be a soldier, it can be a citizen coming from 9/11 disaster, that that citizen has the right to sue the Saudi government for 9/11. Now, not just 9/11. It’s not just limited to 9/11. You need to understand. This has a lot more impact. Let me explain to you. I live here in Pensacola, Florida. We’ve got military bases all around us. We have special ops bases. We’ve got Navy. We’ve got Air Force. We’ve got it all right here. We see more people that came back from a war without arms, without legs, some of them didn’t come back. In Iraq, in Afghanistan.

What we’ve found, Sam, we’ve found that international banks … I’m going to go unnamed at this point. Huge banks. Huge banks, throughout not just the US, but in Europe, were actually funding the money, and actually washing the money that moved through their bank for terrorists. Then, we can follow, where did we see roadside bombs? When we saw roadside bomb, how do we figure out where the money came from? Well, there’s all kinds of records that came out of some work that Massad did and some other agencies did. A lot of records that show us basically what part of a terrorist organization might have been involved. Whether it was Al-Qaeda, ISA, whatever it is. We’re able to trace where these pockets of that money went, and then we can match up with … “Okay, who was killed with a roadside bomb? Who lost a leg or an arm from that roadside bomb that was funded by the Saudi family, or money was washed by the bank?”

How do we follow this? Well, fortunately, there is documents that have been recovered over the years, and we have these documents now to be able to say, “This bank washed this money probably for this entity. That washed money ended up buying the money to build roadside bombs at this particular time, in this particular place, in Iraq or Afghanistan.” This isn’t rocket science. We have it. Obama knows that this is out there. He knows that a lot of these people have lost arms and legs that we know they’ve been funded by banks indirectly. Money’s been washed by banks. We know it’s been funded by the Saudi family, and we’re not able to sue them.

Here’s what your dolt, I mean the real dolt brains, have to say. “Oh, gee whiz. If we do that, then the people are going to be able to sue us.” It doesn’t really work like that. Let’s take a country like Iraq. Let’s take Iraq. Iraq doesn’t even have the entity to have the type of enforceable judgment. You’re not going to find an enforceable judgment reduced in Iraq that they would be able to enforce in this country. We need the vehicle, though, to go after the people that are behind all this. They’re right there in front of us. We know who they are. It’s the Saudi family and the banks that furthered their interest. Obama vetoes that? Really? Why should we be concerned, if we’re doing things right, why should we be concerned anyway if somebody brings a suit against us?

Seder: I couldn’t agree more. I mean, I think to a certain extent, this is a great mechanism to both police, but also to educate our own country about things that we may do that are at least civilly liable in that regard. It’s fascinating, it gets into, and I imagine to a large extent, that veto had not little to do with things like the Iran deal, and we are somewhat sidelined, or at least I guess a side player, in this ongoing proxy war between Saudi Arabia and Iran.

Papantonio: Sam, this is what bothers me so much. It’s another deal with Obama talking one way and acting another. “Oh, these poor veterans coming home without arms and legs.” The government really isn’t taking care of them. Look, these boneheads that say, “Oh, gee, this is going to open the floodgates.” They don’t understand the law. Period. They don’t understand the law. An act of terrorism is different than an act of war. These people that are saying, “This is going to open the floodgates,” well unless we’re doing something, unless we’re involved in terrorism somewhere, then what do we have to worry about? Drones are involved in fighting a war. It’s not an act of terrorism. This is very specific as to terrorism.

Look, it’s the White House that’s putting this idea out there. “Gee whiz. This is going to open the floodgates.” It’s not going to open the floodgates. It’s going to make us act responsibly, and it’s going to allow us to go ahead and recover for these people that have lost their lives and their legs and their arms, simply because a bank somewhere in the US washed money for the Saudi family, because they wanted to promote terrorism, and they thought they could get away with it. We have a president that simply, actually, vetoed that if you can imagine.

Seder: Now, this legislation is happening. We’ve got about 20 seconds left, Pap. Are we going to start to see cases starting now? What’s the timeline?

Papantonio: We’re working on some pretty serious cases right now, where all the money leads to banks that you might even do business with. Let me put it like that.

Seder: I guess we will hear more about that in the coming weeks, months, and I imagine, years.