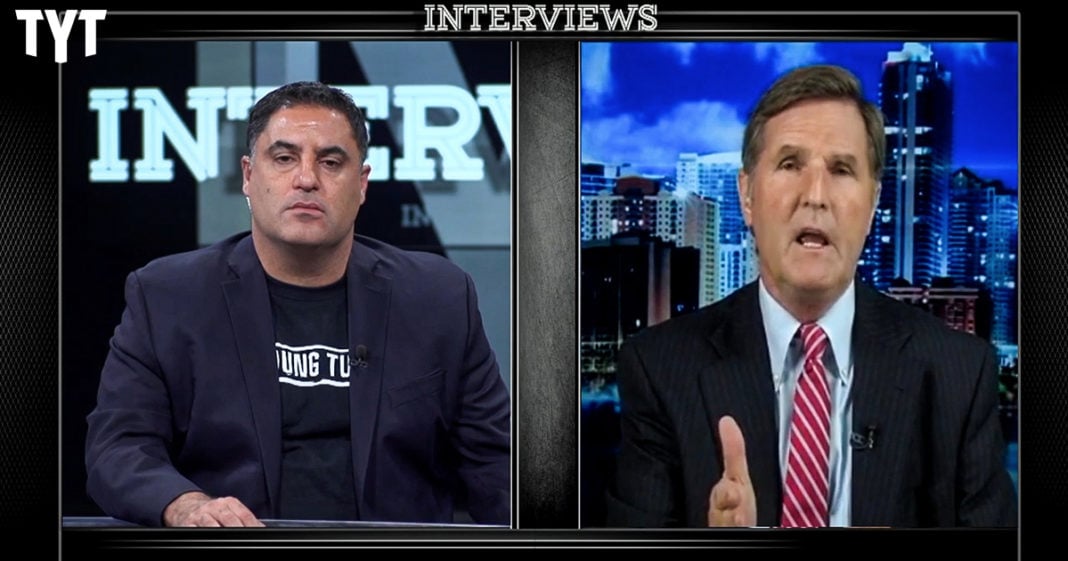 Over the past several years, we’ve seen an increase in police violence through dashcam and cell phone videos, raising the issue of violence against unarmed black men into the spotlight. Ring of Fire’s Mike Papantonio and The Young Turks’ Cenk Uygur discuss this issue, as well as what should be done to stop it.

Cenk: Pap, I did want to talk to you about serious the issue of police abuse and shootings as well. Again, we’re talking to Mike Papantonio host of Ring of Fire and author of Law and Disorder.

We’ve got a little bit of disorder in the country. The right wing would claim it comes from protesters in Charlotte and certainly there’s been some of that. I think that a lot of others would claim that disorder actually comes from the police themselves, whether it’s the shooting just last week in Tulsa, Oklahoma, of Terrence Crutcher, which is actually one of the most egregious police shootings I’ve ever seen. Out of all the ones that we’ve covered, that goes right up there with Tamir Rice. My god, why are you shooting this man?

Then Charlotte, which is a little bit more ambiguous, but really got more protests and people in the streets that in a way that’s more significant. What’s your take on those? Let’s start with what your take is.

Mike: Well first of all Cenk, I remember when we had the Department of Justice. We had Eric Holder coming on saying we’re going to do something about this. When he said that, the truth is, he could do something about it. There was a lot he could do about it. It was all talk though. It sounded like great sound bites. It’s the very thing that we often hear from Obama. Great sound bites, followup, where’s the delivery, what really happened?

With Holder, if you will go back and look at the sound bites that started developing around some of the shootings that he said we’re going to get involved with, what he was talking about is the Department of Justice have some rights to do some things where it comes to police powers. It’s Constitutional, it’s health, safety, and police power. Those are the strongest things government can get involved with. Police powers are extremely strong. The Department of Justice has the right to do a lot of things.

For example, Robert F. Kennedy, during the civil rights era, was able to do some remarkable things down in Alabama and Mississippi. Eric Holder has the right to do something, he had the right to do something with something as basic as funding for these local police entities that get a fair amount of Federal funding, fair amount of Federal help in a lot of different ways. Then comes Loretta Lynch and Loretta Lynch sounds like a parrot. She parrots exactly what was said earlier with Holder, but nothing happens. The reason nothing happens is because it is politically painful, it’s politically painful, especially in election year, to really do anything. To really say I’m going to take action. The Department of Justice has a dozen things they could do tomorrow, where it comes to training requirements, where it comes to equipment requirements, where it comes to a whole host of things that they can do, anywhere in the United States where they see a problem, where there’s Federal funding involved at all.

You know what, the truth is, where it came to Obama’s position on this, Obama was always so afraid that he was going to look like the African-American who’s overreacting on behalf of African-Americans to the detriment of white folks. That is part of what drove Eric Holder, it had to be. If you will go back and look at his history, all of these statements, it was so encouraging. You felt so empowered when he said, I’m going to do something and I’m going to do it tomorrow. Nothing happened with him, nothing happened with Loretta Lynch, and this is where we’re left. You and I will be having the same discussion eight months from now when another 10 people are killed and the Department of Justice still does nothing.

Cenk: If you were the head of the Justice Department, Pap, another dream, what would you do? What are the actions that you would take that you think could make an actual difference in how the police act in this country?

Mike: Well, first of all, you begin with a first step and that is to talk about funding. There are hot spots. There’s great articles written about police brutality hot spots. You can map them out. You can say, Birmingham, Alabama, for example, used to be a police brutality hot spot. It’s not any more. Now we’ve got a Charlotte, North Carolina. Maybe that’s a hot spot, I haven’t seen it on the map, but if it is, you go there and you say, here’s what I’m going to do to you. It’s not a kind and gentle discussion. Here’s what I’m going to do to you.

You’ve got to get their attention and then there has to be some kind of organization, some kind of ombudsman, organization put together by the Department of Justice that this is all they do. They go around and they evaluate. What is the training of this kid that you hired right out of high school? Because he was a running back for your dumpy football team, because he weighs 250 pounds, has an IQ of room temperature, and he’s six foot tall? Why do you hire that guy? He has no education. You’ve given him no training. You compare that guy’s training to what they do in the UK to train an officer. An officer in the UK doesn’t even pick up a gun for four years until he’s worked with an apprentice. They don’t even drive a car fast over there until he’s had a specific kind of driving. Here, here, Bubba knows another Bubba, so Bubba is now on the police force. They give him a gun, they give him a badge, he’s got the intellect and the rational capabilities of an eighth grader. We put him out there with a gun and a car.

The Department of Justice could do something about that immediately by saying, you know what, those kind of standards don’t work. We’re going to have to rewrite standards everywhere and if you don’t want to participate, that’s okay, but don’t expect any money or any help from the Federal government.

Cenk: I like this dream that we’ve laid out where you’re the moderator of the debates, and the head of the Justice Department, and you get to install the Bubba action plan.

Mike: Thanks for the opportunity to say those things, but they need to be said.

Cenk: Right, and Pap lives in the south so he knows.

Cenk: Maybe one day have a progressive president that might make those dreams come true. Mike Papantonio, host of the Ring of Fire, author of Law and Disorder. Thank you so much for joining us on the [inaudible 00:06:10]. We appreciate it.

Mike: Cenk, thanks for the opportunity.