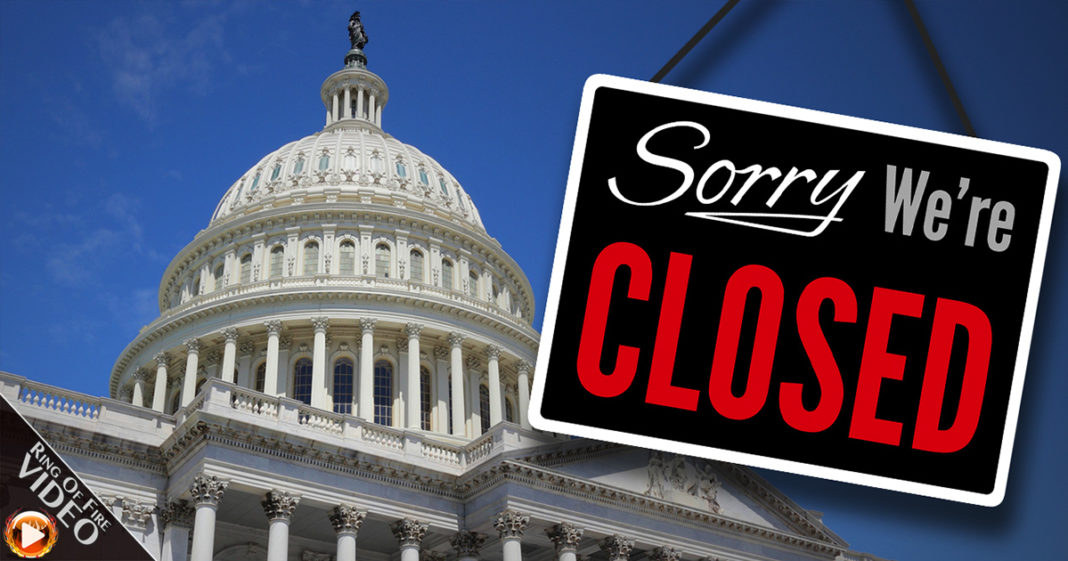 Presidential politics serves as a great distraction for Congress, and almost no one realizes that their failure to pass a budget bill means that Friday is shutdown day for the federal government. The Ring of Fire’s Farron Cousins discusses this.

You know one of the worst things about presidential elections? It makes people forget that the rest of the country is still functioning. The house and the senate, those guys have been back to work for a month now. Have you been paying attention to anything that’s happening there? More importantly, does anybody realize that the government is about to shut down in two days because these idiots weren’t able to pass a budget? Seriously, we’re two days away from a government shutdown because Republicans and Democrats cannot agree on a budget and so the government once again is going to shut down.

Now this is horrible for the economy when this happens. We saw that happen a couple years ago when the Republicans shut down the federal government. Parks closed, museums closed, federal workers did not get paid for that time. The economy took a massive hit, it cost billions of dollars to the economy. It’s all because Republicans were being little cry babies. It’s the same situation that’s happening now. But you know what else happened when the government shut down? It hurt Republicans politically, and so at the same time you have to wonder, “You know what, if it does shut down, yeah the economy is going to take a hit, but man these Republicans are going to lose big with an election right around the corner.”

Now this is all speculation. Obviously the Republicans are not dumb enough to forget about this election, so the government’s not going to shut down. The point of this story is to tell you that we are two days away from a government shut down and nobody is paying attention. Our corporate media is focused on all the dumb crap that Donald Trump is saying. They’re focused on post-debate polls, “Hillary won this one but Donald won this one. Hillary’s up three points nationally after the debate, what are we going to do? Let’s put a countdown on the TV because we only have forty days until the election.” Who cares?

There are still policy being made in the United States, or in this case policy not being made, that has disastrous consequences for the United States. Yeah, let’s talk about what Hillary wore at the debate or Donald Trump sniffling all the time or Howard Dean Tweeting about it and having to go on TV and defend whether or not Donald Trump is actually on cocaine. Forget about the government almost shutting down, let’s talk about stupid shit, because that’s what the media has become. That’s what the American public’s become. They do this because you eat it up.

Look just do me a favor, turn off the television. Stop watching MSNBC or Fox or CNN, hell even ABC and CBS. Let it go. It’s over. Who cares about the next thing Donald Trump says that insults somebody. He’s going to lose anyway because everybody gets it. We understand it. We know that’s what he does. He’s a horrible human being. He’s a waste of oxygen. Let it go. Start talking about these issues, like the potential government shut down, things that could affect millions of Americans, because Donald Trump once again making fun of someone that’s not news, that’s just who this idiot is.

Let’s talk about what matters, and what matters right now is making sure that we have Republicans and Democrats in Washington who continue to keep the government functioning, who continue to do their jobs that they’re elected and getting paid a hell of a lot of money to do. Merrick Garland still hasn’t been given a hearing, we’re just going to let that go because Donald Trump had a few sniffles during the debate? Come on. It’s time to focus on these issues, and the only way to change the media’s focus is to turn them off.