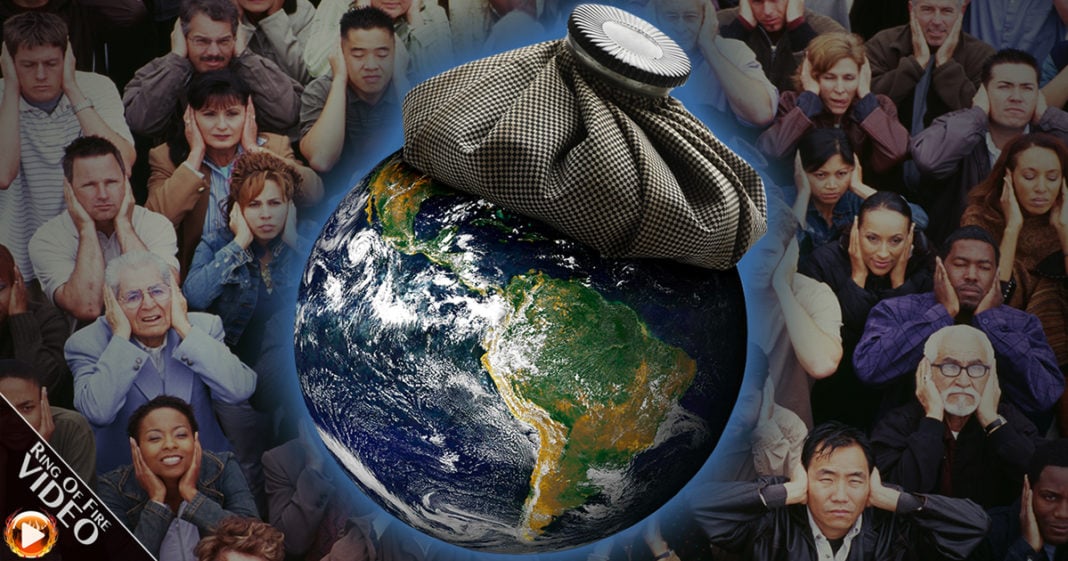 With so many environmental disasters happening, and so little media coverage or political action, it seems like the United States has just resigned itself to its fate. I guess we don’t have to worry about climate change anymore. The Ring of Fire’s Farron Cousins discusses this.

In Monday night’s presidential debate, there was a very brief moment where the words “climate change,” “environment,” “Chinese hoax” actually came up in the conversation. There was no direct question about climate change asked of either Trump or Clinton, but that underscores the larger problem. As a country, have we just given up on climate change? We just don’t care anymore. It never gets coverage in the media. The progressive media covers it extensively. There’re organizations and websites devoted solely to covering environmental issues. They’re actually pretty successful, but the corporate media, our politicians, nobody wants to talk about it. It’s not something that the average person can just grasp in a 15-second sound bite, so they don’t bother.

We talk about floods, and fires, and earthquakes caused by fracking, but we never actually make that link. We just say that oh, bad things are happening. Could it be climate change? Let’s bring on two people who disagree about this to discuss it. That’s not how climate change works. Then we talk about policy coming out of Washington. Yeah, we got the Clean Power Plan that’s still actually not in effect, because Republicans are holding it up in the courts, but even that doesn’t go far enough to actually reduce emissions considering how much drilling, and mining, and fracking is happening in the United States, because yeah, we’re going to help reduce the emissions coming out of coal-fired power plants with this rule that Obama’s come up with. That doesn’t stop the increasing emissions from coal mining, or from oil burning, fracking.

It all negates itself. There are no gains. Obama has not been a good president for the environment. He has not been somebody who’s actually willing to tackle climate change. I know you say, “Well, look. Republicans have blocked a lot of stuff.” Yeah, they have. You know what he could do? Issue an Executive Order. Now, House, Senate may fight back on that, may try to take it to the Supreme Court, but at least he tried. That’s not something we can say right now. Putting forth legislation and then having the House or Senate vote it down and saying, “Oh, well. I’m going to go home now.” That’s not trying. That’s quitting. That’s giving up. That’s what President Obama has done. That’s what the House and Senate have done, and at this point it looks like that’s what the American people have done. Yeah, the planet’s getting warmer. We’re getting more floods, more fires, more earthquakes. Ice sheets are melting, but screw it. We can’t do anything, right? Let’s just go watch Donald Trump say stupid stuff on the corporate media.