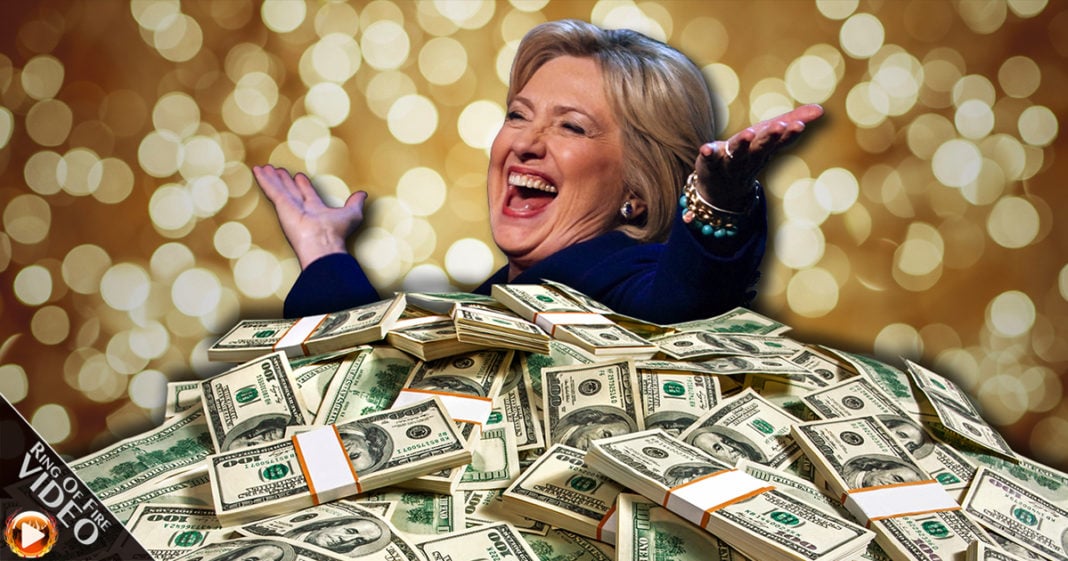 It wasn’t that long ago that Democrats were talking about the evils of corporate money flowing into campaigns. But today, Hillary Clinton is outraising Donald Trump, and they think its the greatest thing ever. What happened to this Party? The Ring of Fire’s Farron Cousins discusses this.

According to a new report by Bloomberg, Hillary Clinton is pulling in 20 times more campaign money from billionaires than Donald Trump is. Now obviously, this is a complete reversal from the way things typically work. Usually the big money donors are all in the pockets of the Republicans, but Hillary Clinton is getting people, Steven Spielberg, George Soros, those type of billionaires who are more progressive, and not the Sheldon Adelson types, who always go Republican, but it doesn’t matter where the big money comes from. Democrats for years, especially since 2010, have been talking about the corrupting influence that money has in our political system.

The question is why are we still being so silent about the big money that Hillary Clinton is raising? We should be concerned about it. If it’s not okay for Republicans to do it, then it’s not okay for Democrats to do it. We can’t have this, well, they do it too, so it’s no problem when we do it. No. That’s childish, immature, and downright false. If it’s not okay for them, it’s not okay for us. We need to look at her campaign donations a little bit more closely. As we have seen from President Obama, money corrupts Democrats just as much as it corrupts Republicans. Look at the FDA approving a drug that literally doesn’t work, because big pharma is going to make two billion dollars off of it. That’s because Obama, who got pharmaceutical money, put a pharmaceutical guy in charge of the FDA to make that decision. That’s what happens.

That’s why we have to question this money that Hillary Clinton’s getting. That’s why it’s not a good thing that she’s pulling in more billionaire money than Donald Trump. The Democrats have always prided themselves on being the party that’s accountable to the American public. Somehow in this election that’s been flipped. Donald Trump is now the one saying that he’s representing the people and Hillary Clinton’s for special interests. While that’s not true, the American public believes it, and it’s because they see headlines like this showing that Hillary Clinton is pulling in big billionaire money. I don’t care. You can make whatever excuses you want. That doesn’t make it okay. That doesn’t make it a good thing.

We have to get all of the money out of politics, because until we do, it won’t matter if it’s a Republican or a Democrat sitting in charge of the White House, or the Senate, or the House of Representatives, because they’re not going to be the ones calling the shots. It’s going to be whoever put money into that person’s campaign, and that’s why it has to end now. Republican or Democrat, doesn’t matter who you are. You take corporate money, you’re accountable to corporations, not the American public, and it’s not okay for anyone to do that.