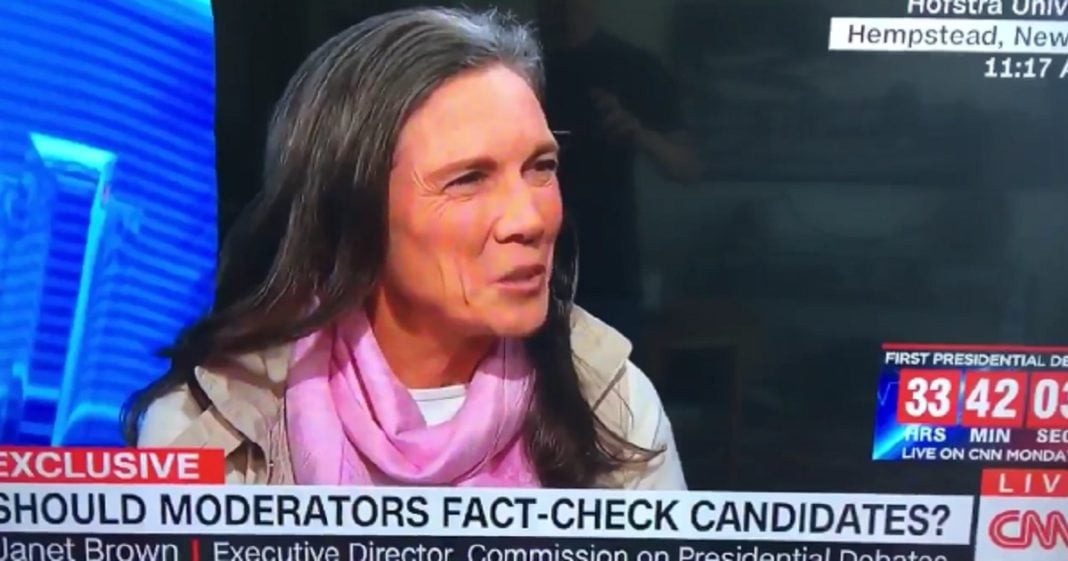 Ever since Donald Trump and others suggested that debate moderators not worry about pesky little things like facts during the debate on Monday, several others have latched onto the idea, trying to make an argument against fact-checking.

Now, even the head of the debate commission is calling for moderators to shut their yappers when it comes to correcting the record, and let the candidates speak (and lie) for themselves.

Janet Brown, the executive director for the debate commission appeared on CNN on Sunday to discuss the debate with Brian Stelter, and on the question of fact-checking, she seemed to waver.

Brown suggested that there is a difference between a “big fact” and a “little fact,” and argued that moderators could use different sources from the candidates to check the facts.

Funny thing about that is, aren’t facts just simply facts? If a source is legitimate, it should come up with the same result every time – cold, hard facts.

It is shocking to see the head of the debate commission taking Trump’s side on this. By refusing to allow moderators to check candidates on the accuracy of their claims, it puts every viewer at risk of being misinformed and mislead by one or both candidates.

Head of Commission on Presidential Debates doesn’t want moderators correcting lies because “what is a big fact, what is a little fact?” #cnn pic.twitter.com/krm5FeV9aW