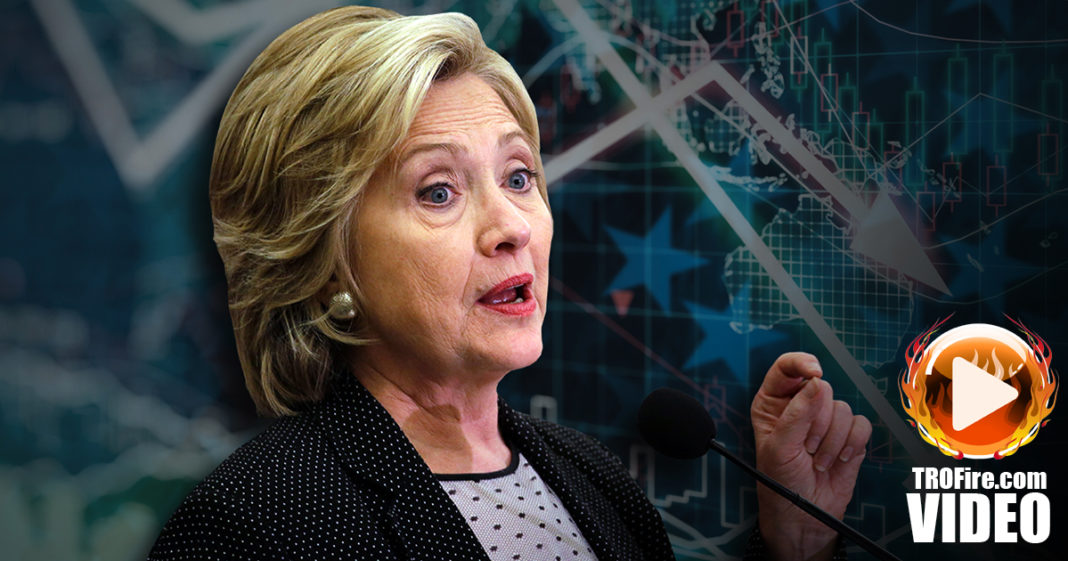 Polls now show that Hillary Clinton’s lead over Donald Trump has evaporated, and the Democratic establishment along with the pro-Hillary social media warriors are blaming everyone but Hillary for this drop. The Ring of Fire’s Farron Cousins discusses this.

I have bad news for everyone that is not a flag-waving, die-hard Hillary Clinton supporter in the United States. According to democrats, if you do not fall into that category, you are the reason that Hillary Clinton might possibly lose this election. Now, over the last few months, we have seen a lot, a lot of people on social media, everybody from reporters, to bloggers, to just the average voters telling anyone who dares question Hillary Clinton that they are helping to get Trump elected, they are the reason that she could lose, and if she loses, it is all your fault because you’re not blindly supporting her, you are, God forbid, saying things that are true, we just don’t want to hear them.

That’s not what they’re saying about that last part, but that’s what they mean. Listen, it is our job as an independent media to report the facts. Sometimes those facts support your candidate, sometimes they don’t, but you can’t get pissed off because a fact is a fact. A lot of people have accused us actually of being a little pro Trump. Go back and watch every single video, read every single story we have ever posted about Donald Trump and tell me if you can find a single positive thing we have ever said about the man. He is filled with hate, he is unprepared, and he would be the worst president in the history of the United States. That’s pretty much the gist of everything we have ever said. We have never said anything positive about him. Don’t you dare accuse us or any other progressives of trying to help get Trump elected.

We’re not even trying to derail Hillary Clinton’s campaign. We’re presenting facts and according to her supporters, it’s our fault if she loses. Let me give you an analysis here that I think pretty well sums up what’s happening with this presidential election. Compare it to a football team. Hillary Clinton is the quarterback, right? Quarterback is up against a third-string republican team because that’s what Trump is. He’s definitely not top tier material. We got a quarterback up against the third-string and what does she keep doing? Throwing interceptions, so the crowd is walking out of the stadium halfway through the game. It’s not the crowds fault that you lost. Yeah, I know the crowd does play a role. They make noise that distracts the other team, but it’s not their fault.

The only person responsible for the fact that Hillary Clinton’s poll number are falling and she is now statistically tied with Donald Trump is Hillary Clinton. The democratic party chose to go all in with Hillary Clinton. They made that choice. The voters made that choice in the primaries. We’re stuck with this. That doesn’t mean we’re going to ignore all of the horrible things that she’s done. It doesn’t mean that we’re not going to hold her accountable and call her out when she does bad things. That’s always been our job. We’ve done it with President Obama, we did it with George W. Bush, and we’re going to continue doing it as long as we exist. We’re going to call out bad things. We are not cheerleaders for anyone. When Bernie Sanders screwed up, we called him up. We’ve called out Jill Stein and Gary Johnson. We called out Donald Trump at a daily basis.

Hillary Clinton’s potential defeat is not our fault. Nothing that we have said has been untrue and nobody’s proving anything untrue that we have said. The same thing goes with reporters like David Sirota. I see Sirota getting attacked all the time online for this. This is ridiculous. The Hillary Clinton campaign needs to take some responsibility for themselves. They created this mess. They’re doing very little to address it and fix it, and so yes, it is their fault.

Sure, if voter turn out as low, you could say, “Well, they didn’t show up, so she lost.” You gave nothing to show up for. You gave them no one to be excited about. No one that they believed would transform this country in a way that it needs to be transformed. That’s not the voters fault. That’s the democratic party and Hillary Clinton’s fault.