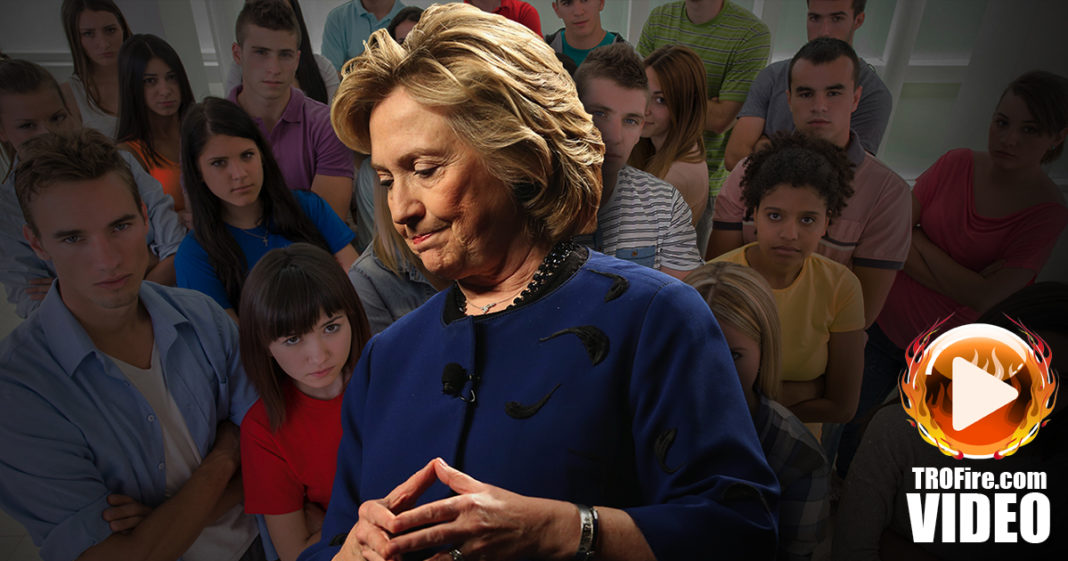 The latest polls show Hillary Clinton’s support among Millennials falling even further, and her outreach to the 18 – 34 age group has been pathetic, to say the least. The problem is that she absolutely doesn’t understand how badly the policies of the last 16 years have hurt this age group. The Ring of Fire’s Farron Cousins discusses this.

Hillary Clinton understands that she is struggling with millennial voters, voters aged 18 to 34. Now, yesterday she gave a speech trying to address this kind of crowd saying, “Look, I’m on your side. I understand your issues. Vote for me. Everything is going to be great. Let’s move on. I got another campaign stop to make.” Not really how you reach out to young voters. She is not addressing their actual concerns. Bernie Sanders did and that’s why that group overwhelmingly supported him. Supported him so much that if he were the nominee, there would be no question that he would win.

Now, analysts are saying that this millennial generation, these millennial voters, the largest voting block of 2016 by the way, aged 18 to 34, their lack of enthusiasm over Hillary Clinton analysts are saying that this could cost her the election, that one age group. Now here is part of the thing, older generations always like to pick on the younger generations. It’s something that has always happened throughout basically American history, the older people think they know better, the younger people think they know better, they just don’t get along for the most part.

If you go online you do see a lot of this Baby Boomer generation, the 35, the 60 age group as well talking about, “Oh, these kids, they are going to cost us the election. They don’t understand. They just want free stuff, blah, blah, blah.” They are just attacking them. No, listen to me, this age group, of which I am a part, knows a hell of a lot about this. They grew up during the George W. Bush years, when things got screwy. They saw their parents lose their homes because of the banking scandals and crisis.

I’m one of those people who watched that happen to their parents and it was because of shady actions, illegal actions, by the banks. We understand perfectly what’s happening and we understand what’s at stake. We understand that we can’t go another four years of Obama corparist policy carried on by Hillary Clinton. We want real change. We want real answers. Let me tell you, Hillary Clinton going and doing commercials and saying like, “I have a plan for this, go to my website.” No, no, you tell us your plan. Instead of just doing ads attacking Donald Trump, why don’t you tell us what you are going to do as president.

We all know Donald Trump is an idiot, you don’t need to spend tens of millions of dollars telling us that. We want to know what you stand for because we don’t. We can only look at evidence and that evidence suggests that you don’t care about the issues that face millennials. Yeah, you talk a big game on climate change, well hell so did President Obama. You’ve also said that we got to have an all of the above approach to energy and that’s not acceptable anymore. You’ve said yeah student loan debt, it’s a crisis, we have to do something about it. What?

What do we have to do about it? Give us an answer. Come up with a policy, a proposal, something. How about you take away the subsidies, the 4 to 7 billion dollars a year that we are giving to the fossil fuel industry and put that toward student loan relief for free college for every kid in the country? How about you do that? How about you propose that? How about you say that? But you won’t. You are going to keep giving these vague answers and saying, “If you want policies, go to my website.” We can do that, I hope people do, but I guarantee once they get they are really not going to find much because this election is not about substance and that what’s pissing millennials off.

Yeah, Hillary Clinton is still winning among millennials, obviously they hate Donald Trump. I think about 70% of the 18 to 34 year old age group says Donald Trump is unfit to be president so they are not going to go for Trump but about 18% of them, say they are going to vote Gary Johnson. A large percent fewer than 18 but fairly decent say they are going to vote Jill Stein. These people are shaping the political beliefs that are going to be held for the rest of their lives right now, studies show that. The beliefs that you hold during that age frame tend to stick forever.

The Democratic Party, Hillary Clinton is pushing them away by paying them lip service and not actually doing anything or saying anything or acting sympathetic to their situation. A situation that was created through no fault of their own but through bad policy. I entered college in the year 2001, you know what the interest rates on my student loans were? 1.5%, 1.5. any student going to college today or who has graduated in the last ten years would kill for a 1.5% interest rate but instead the government who issued these loans, who work these through FAFSA has decided, no we can bump it up to 6, 7, 8%, maybe even higher.

They allowed that to happen. The rising cost of tuition at public universities, they allowed it happen. Lack of public option health care for kids to buy into, they let that happen. That’s why Hillary Clinton is struggling with this age group because she doesn’t understand that the corpartist policies of Obama, of George W. Bush, and of the members of Congress is screwing over this generation more than anyone else. It’s not fair. They understand that and their votes are going to show their anger. Hillary is going to win that age group obviously, but only, only because she is up against the easiest, two-beat Republican we have ever seen.

She can still lose this election if these people decide, you know what? I’m not going to vote and that’s very probable. It is most likely going to happen and that again, very scary proposition to have Donald Trump in there because we know he is not going to address those issues. He is not even going to tackle climate change which is going to affect that generation more than any other except for possibly the one behind it. The point is Hillary Clinton, she can talk all she wants about these issues but until she comes out with very clear policy proposals and says, “This is what I will do, not what I want to do, what I will do.”

Until she does that, they are never going to take her seriously and that’s going to kill her in this election.