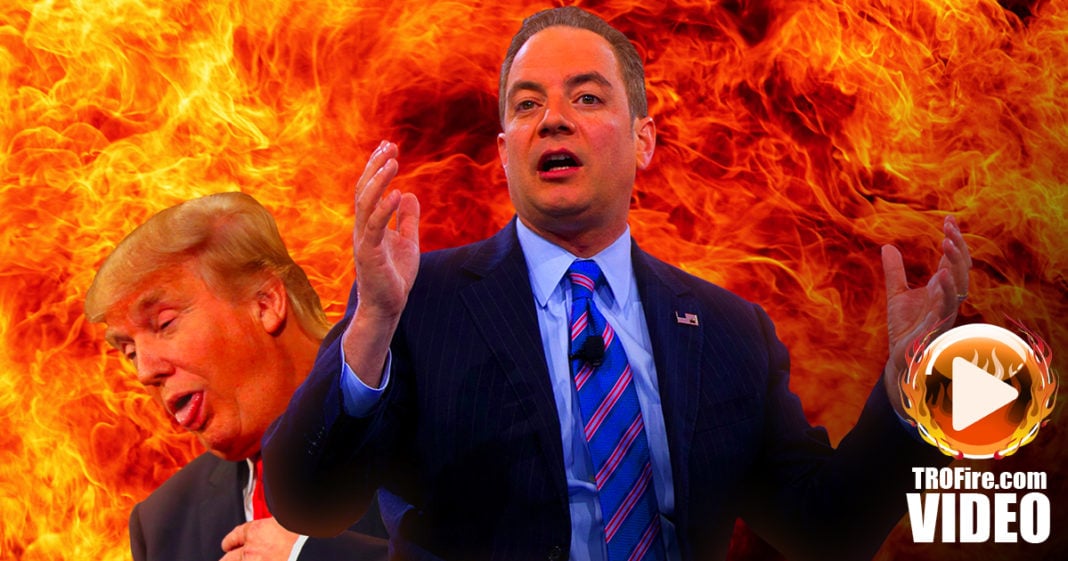 Reince Priebus, the chairman of the Republican Party, has absolutely had it with Republican officials who won’t support Donald Trump, and told the weekend news shows that these Republicans had better fall in line, or else! The Ring of Fire’s Farron Cousins discusses this.

Reince Priebus, the chairman of the Grand Old Party has a very, I guess you’d call it a stark message for his fellow elected Republicans that do not want to support Donald Trump. The message is this, this is what he told CBS Face the Nation this past weekend: “If you do not support Donald Trump, you better fall in line,” those were his words, “Fall in line, or else, the next time you seek reelection, you may not have us to back you up.”

Basically, Priebus is telling Republicans who won’t jump on the Donald Trump hate train, if you do not support our guy, you are going to feel our wrath and we are going to change the rules within the Republican party, priebus suggested this, to make sure that you can’t even win a primary in the future.

Priebus, obviously, he’s not a huge fan of Donald Trump himself, but like any good team player, it doesn’t matter who the candidate is, it could be Satan himself, which it pretty much is, he will force the Republicans to get in line and say, “You will go cast your vote for Lucifer or else we will cut you off forever.” That’s what’s happening.

Since then, the Republican party has fallen apart and it’s continued this downward spiral that has resulted in Donald Trump, and rather than coming out and saying, “Look, we want to do better, we need a better candidate, we need better policy positions, we need more unity, more cohesion,” no, Reince Priebus is saying, “If you don’t support Donald Trump, we’re literally going to change the rules within the party to prevent you from ever holding office again because you won’t jump behind this idiot that we somehow created.”

That’s Priebus’ message to the entire Republican party, and it’s very scary. There is no thinking outside the box in the Republican party allowed. There’s no defection allowed. If you do not immediately fall in line, you will be punished. Sounds a lot like another, I guess you’d call it, political group that most of us learned about in our history classes that came about in the late 1930s, 1940s, doesn’t it? You can’t disagree with anything we say or we’re going to basically destroy you?

It’s pretty much what the Republican party of today has become.