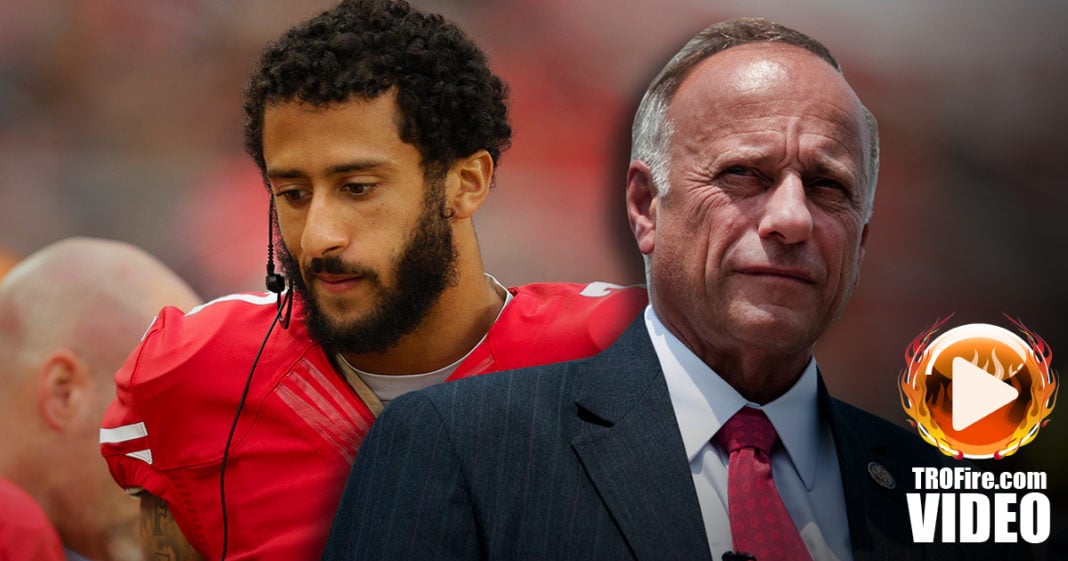 Republican Representative Steve King doesn’t seem to understand how the Constitution works, as his attacks on Colin Kaepernick demonstrate. Apparently exercising your Constitutional rights makes you an ISIS sympathizer. The Ring of Fire’s Farron Cousins discusses this.

Representative Steve King has been no stranger throughout his career to saying really stupid things, but what he said this past week during an interview with Newsmax may actually be one of the dumbest things that this man has ever said.

During the interview, Steve King, Republican, told the interviewer that, “You know what? Colin Kaepernick protesting could be a sign that he sympathizes with ISIS.” King based this analysis solely on the fact that he thinks Kaepernick’s fiancee is Muslim. Because of that, some how, Kaepernick is now an ISIS sympathizer, because obviously in the minds of all republicans, anyone who is Muslim, or even Middle Eastern, is 100% an ISIS member, I guess.

Steve King is an idiot. I don’t think there’s too many people out there who are going to argue that fact. Look at what he’s done throughout the course of his career. He voted against Hurricane Katrina aide. He said that Obama is a secret Muslim. He wasn’t more lobbyists roaming the halls of congress, because he thinks they’re really doing admirable work over there. He is in favor of police using racial profiling. He firmly believes that racial profiling works, and that no, it’s not discriminatory whatsoever. He also believes that climate change is a hoax, and has compared it to some kind of crazy cultish religion. This is the guy who thinks that Colin Kaepernick taking a stand, by sitting down, against all of the horrendous actions that are happening from police against black people throughout this country, he thinks that that shows that this guy clearly supports ISIS.

The irony here, is that Kaepernick and the rest of the NFL players who are protesting, by protesting, they’re actually respecting the United States constitution more than a guy like Pete King, or Steve King.