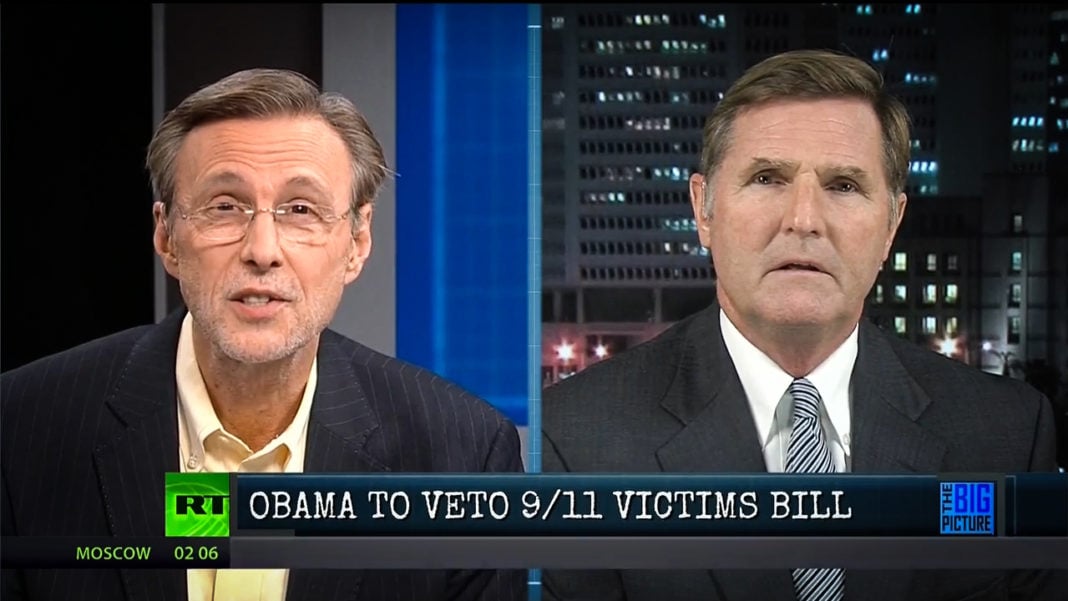 President Obama has promised to veto a Saudi Arabia 9/11 liability bill, preventing the victims of the 9/11 terrorist attacks from being able to sue the nation for funding the attacks (or even finding out IF they funded the attacks.) This is absurd, and the arguments in favor of the veto are absolute lies. Attorney and author Mike Papantonio discusses this with Thom Hartmann.

Thom: Which is why many people support a bill passed by Congress that would allow Americans to sue the Saudi government for the role it may have played in the 9/11 attacks, if that role could be demonstrates. They think a lawsuit could shed further light on the Bush-Saudi connection, too. Do you know who doesn’t support this bill? President Obama. Says he’s going to veto it because it threatens American national security. Is that really true? Who’s he trying to protect?

Joining me now is Mike Papantonio, America’s lawyer and host of Ring of Fire Radio, and author of the forthcoming book, Law And Disorder. Pap, welcome back.

Mike: Thom, good to be here.

Thom: Great to have you with us. I don’t get it, Mike. This is a bill supported by overwhelming majorities in the House in Senate, why does the president oppose it?

Mike: Well, we finally have do-nothing Congress pass some meaningful legislation, and as you point out, President Obama has made it clear that he’s going to veto the legislation. Let me tell you why that’s important.

Fifteen of the nineteen hijackers from 9/11 were from Saudi Arabia, and there’s evidence that suggests the Saudi government funneled money to Al Qaeda in the years prior to the attacks, it’s very clear. This was the largest terrorist attack on American soil, and we know that Saudi Arabia is involved to a large extent, and President Obama knows that too.

President Obama wants to protect not just the Saudi Arabians, but all of the banks that financed all of that, Thom. As it stands right now, US citizens or US contractors can only sue a government that’s been designated as a state-sponsored terrorism; for example, countries like Iran, Syria, and North Korea, among others. Saudi Arabia unfortunately doesn’t fall into that category for some reason, but this legislation would remove that barrier for victims of 9/11.

It’s common sense, it’s just, it’s the only way these people can recover, and Obama is standing in the way for the very same reason he always stands in the way, where it comes to consumers going after Wall Street. There’s no difference here; his arguments on why he’s not doing this are absurd.

Thom: Do you think that he’s trying to protect the Bush family? I mean, every since Nixon was pardoned by Ford, there’s been a sort of an American tradition of presidents never allowing any serious investigation into the crimes, shall we say, of their predecessors; presumably on the assumption that, if I’m good to the people before me, the people after me won’t come after me. History will treat me well, all that. Do you think that plays any role in this?

Mike: There’s some small role. If I were to say what the biggest role is, though, it is this president’s allegiance to corporate conglomerates, corporations that simply have their way. The McDonald Douglas folks, the Boeing folks, the banks that finance all of this; terrorism cases against foreign governments have been hugely successful, Thom, in the past, recovering about ten million dollars for victims.

They aren’t easy, and passing the legislation is not going to open the floodgates, as Obama suggests. There’s not going to be floodgates about Saudi Arabia; there’s many docs that have to be connected to terrorism cases. First you have to be able to prove a foreign government provided money to a terrorist group, with expressed intent of carrying out attack. That’s just the first part.

This argument, the argument that we’re hearing is, “Gee whiz, if this happens, then other people are going to sue us, other countries are going to sue us, and we’re going to be victim to being sued for our conduct.” The point is this: if you really drill down on the real part of this puzzle, it’s hiding money terrorists, the banks have been doing forever; for banks, terrorism is a business, Thom, just like anything else.

It costs money to pull off attacks, and so these terrorists have to put their money somewhere, and lawyers have been able to successfully get criminal conspiracy charges against global banks like Credit Swiss and other banks, that have been implicated in laundering terrorist money. It is nothing but business for Bank of America, or HSB, and UBS, and those are the people that Obama is protecting here.

Thom: Remarkable. You point out that he has said that we could be subject to retaliatory suits, but it sounds like what you’re saying is that the big worry is not that a lawsuit would be won or lost, us suing somebody else, or somebody else suing us, but rather the information that might come out in discovery, in the process. It’s the process that they’re afraid of. Do I have that right?

Mike: Could be, Thom, but first of all, a country has to have a judicial infrastructure that can even mount a lawsuit. It’s not one government suing the United States, it’s some private individual in some country that’s going to say, “Gee whiz, we’re a victim.” The judicial process has to support that. There aren’t many democracies like that out there that even are close to bringing such a case.

None of these issues that Obama is raising really are impacting his decision. It’s not about, “Gee whiz, we’re afraid we’re going to get sued.” What he’s afraid of is these banks, that are now finding out-

Thom: That’s what I meant, that in the discovery process, they would learn the of the banks.

They were willing to launder the money, because they make big money laundering money. That’s what Obama is protecting, if you really drill down on this one.