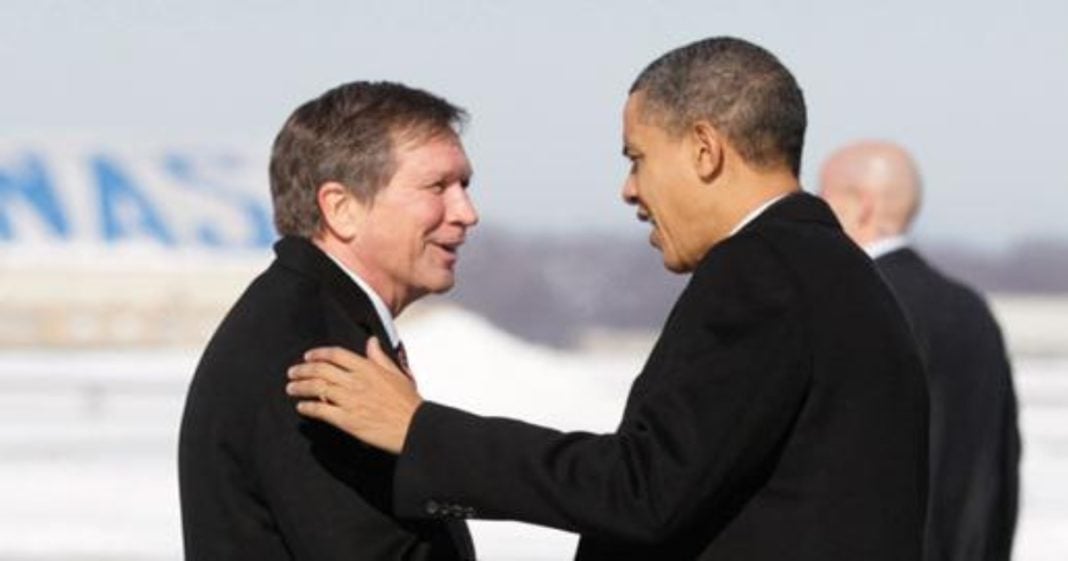 Finally, the president has decided to team up with some Republicans on a real “bi-partisan” issue – too bad that issue is supporting the Trans Pacific Partnership.

Today, the president plans to join failed presidential candidate Governor John Kasich to hold a “bipartisan strategy session” in order to figure out ways to get the disastrous trade deal TPP passed.

When Kasich was asked if he feared political backlash for participating in a bipartisan meeting with the president, the governor offered a brave speech which would be admirable and inspiring if the subject weren’t supporting TPP.

“You know, when it comes to the president, he and I have a lot of disagreements. But there are areas that we can agree. If I can become somebody in the front that leads an effort for people to hear this and say you know what maybe he’s right, what would I do? Shrink? Go hide somewhere? That’s not who I am.”

Obama has been pushing hard for his beloved trade deal in the final months of his term despite the opposition coming from more progressive Democrats. Both presidential candidates are officially against the trade deal, and thanks to the strong push from Bernie Sanders, so are a great deal of liberal voters.

Candidates aren’t the only one opposing the deal. Nobel Prize-winning economist Joseph Stiglitz opposes the trade deal, saying that only benefits corporations and leaves workers behind.

Instead of reading the wishes of his constituents, the President has begun seeking support from establishment Republicans – a sure sign that he is on the wrong side of the issue.