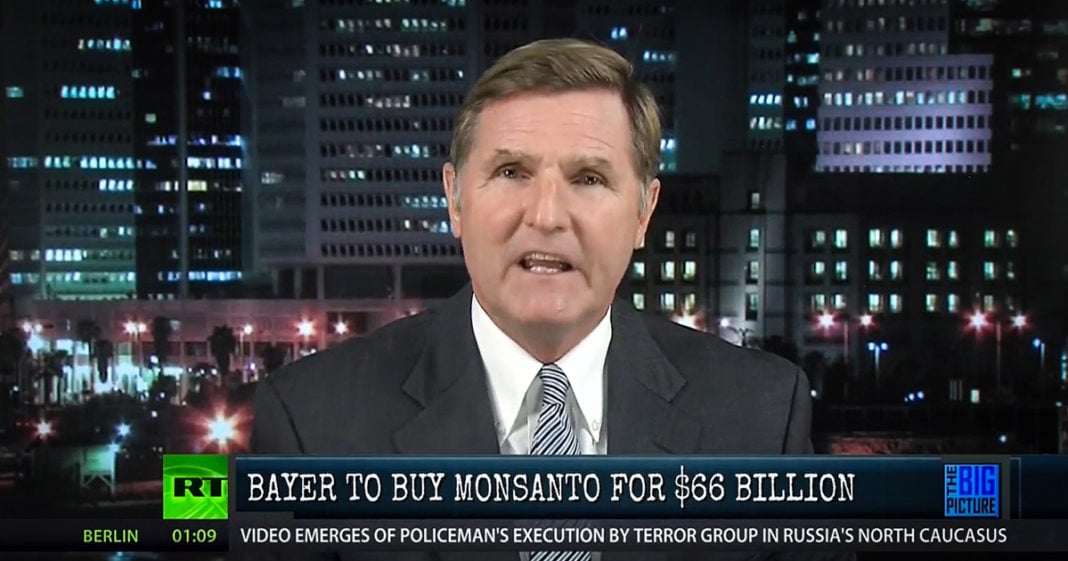 The Bayer corporation has successfully bid $66 billion to buy out chemical giant Monsanto, making these two corrupt organizations into one deadly behemoth. Attorney and author Mike Papantonio discusses this with Thom Hartmann.

Thom: Meanwhile, Bayer, the German pharmaceutical conglomerate, is in the process of buying Monsanto for $66 billion. This is going to create the largest argi-business on the planet. It will control 29% of the world’s seed market, 24% of it’s pesticide market. How concerned should everyday American’s be by that move?

Mike: Very. Very concerned. There are two huge issues with this Bayer Monsanto merger. The first is, that it’s going to raise food prices all across the United States and even beyond our boarders. Farmers have already experienced a 300% price increase in recent years, on everything from seeds to fertilizer, all of which are controlled by Monsanto, and ever forecaster is predicting that these prices are going to climb even higher because of this merger. We’re going to have this massive price hike, at a time when 14 million Americans have already been unable to provide food for their families, and then we’re going to have this ethical problem that’s plagued both of these corporations for decades.

Let’s start with Monsanto. This is a company that produced Agent Orange, which resulted in one of the largest human-induced health epidemics in modern history. They made dioxin, they created and distributed PCB’s across the planet, and now, pending litigation against them for Roundup is right there. Looking at their rap sheet would scare the heck out of anybody with a brain. They’re in the business … Actually, really, when you drill down to it, it looks more like a cancer business than anything. They’ve been hit for false advertising and bribing public officials.

Then, move to Bayer. We’ve got Bayer and we’ve got Monsanto. Move to Bayer. This is a company that’s joined at the hip with the Nazi’s, during World War II. They produced a clouding agent for hemophiliacs, in the 1980s, called Factor VIII. This blood clotting agent was tainted with HIV and then, after the government told them they couldn’t sell it here, they shipped it all over the world, infecting people all over the world. That’s just part of the Bayer story. Right now, they’re facing lawsuits over products like Yaz, Xarelto, Essure, Cipro. In fact, the company, in 2014 annual report, listed 32 different liability lawsuits that the company’s now facing.

Now, you have the worst of the worst joining with the worst of the worst, and we have this magnificent experience of greed with these two huge corporations. This is a merger of evil, probably second only to the kind of merger that we’d see with DuPont and DOW Chemical. It’s an ugly story. Again, the media is missing the point. They’re not looking at all behind what these people are … They’re people. These corporations are regarded as people. If these are people on a witness stand, it’s going to be a very ugly cross examination. Theses are people who should probably be in prison, rather than engaging in mergers.