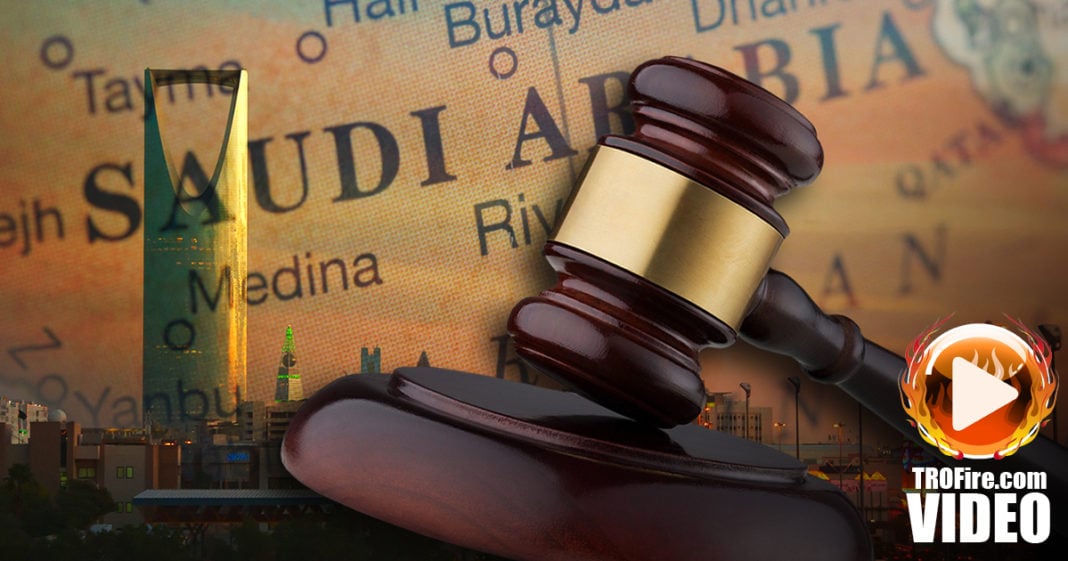 President Obama has promised to veto a Saudi Arabia 9/11 liability bill, preventing the victims of the 9/11 terrorist attacks from being able to sue the nation for funding the attacks (or even finding out IF they funded the attacks.) This is absurd, and the arguments in favor of the veto are absolute lies. The Ring of Fire’s Farron Cousins discusses this.

Last week the House unanimously passed the bill, by voice vote, that would allow victims of 9/11 to sue Saudi Arabia for their funding of those attacks if they actually did fund it. Now this bill mirrors a similar bill passed by the Senate earlier this year and now they go to President Obama who has promised us that he is going to veto this. In fact, as of now he hasn’t but by the time you are seeing this, there is a good possibility that he has already issued this veto this. A lot of progressive liberal Democratic websites right now are saying, no, no, no this is a good thing. We want him to veto it. We do not want to do this because what’s going to happen it’s going to open the door for retaliation from these other countries.

They might start suing us for these drone strikes. They might start suing us for the Iraq war. Well to that I say, good. When we screw up we need to be held accountable. There is nothing wrong with that. Second of all, there is nothing stopping them from doing that right now you idiots. If they wanted to sue the United States for that they could. The House of Representatives can’t pass a bill that allows another country to sue our country. I mean that is basic politics civics 101. Second, the reason this bill is so important is because right now United States citizens contractors working overseas, what have you, can only sue countries who are designated by the United States as state-sponsors of terrorism, Iran, Syria, North Korea, and the like.

Saudi Arabia does not have that designation that is why we cannot sue them. Here is the story that no one has talked about yet, anti-terrorism lawsuits have been incredibly successful since the 1980s and they are incredibly difficult to prove. Earlier this week I spoke with one of the foremost lawyers who has handled these cases for decades. He told me that this is how it works, first of all you have to determine whether or not the government is giving money to terrorist organizations. Once you have established that, you have to determine if that money was used to fund this particular terror attack, say terror attack X.

Then, was the victim suing injured in terror attack X? If we find out that Saudi Arabia is funding terrorism but they didn’t fund the 9/11 attacks guess what? We can’t sue. This is not going to open the floodgates for lawsuits against Saudi Arabia. What’s it’s going to do is let us know what they are funding. If they have nothing to hide, let us bring the lawsuits because then they are just going to get dismissed. Let us know where that money is going. The lawyer I spoke with also told me that these governments and the banks look at terrorism as a business.

Just think about this, you have terror cells all over the world really and they have money. Terror attacks take a lot of money. They are not just sitting with cash in a cave, that money is in banks. Those banks know where the money came from but due to the laws in whatever countries they are funneling it through, they don’t have to disclose. They just happily payout when they write a check or when they try to wire money somewhere else. Credit Suisse is one of the foremost terrorist money-laundering banks in the world.

That is another thing that we find out through these lawsuits. We find out what banks are funneling money for terrorists. That is important knowledge that we have to know. We could shut them down. We can bankrupt terrorist countries. We can bankrupt terror cells, just like what Morris Dees, the legendary civil rights attorney, did with the Ku Klux Klan. He sued them financially and ended up bankrupting that organization. It almost completely killed their power in the United States. They have never returned to what they used to be in the early part of the 19th century or 20th century.

That is what we could do to terrorism but for some reason President Obama wants to protect Saudi Arabia, the country that is ranked as one of the worst in terms of human rights, a country that treats women worse than they treat animals, same thing with homosexuals, or anybody who is not their religion. They may not have funded the 9/11 terrorist attacks, but if President Obama vetoes this legislation, and does not allow American citizens to sue to at least find out, then we will never know for sure if they funded 9/11 or if they funded any other attacks across the globe and that’s not okay.

There is no reason to protect Saudi Arabia and if the only reason of doing this is because you are scared of retribution in the form lawsuits against the United States, then your cowardice is preventing the people in this country, who lost loved ones in those attacks, from ever getting justice.