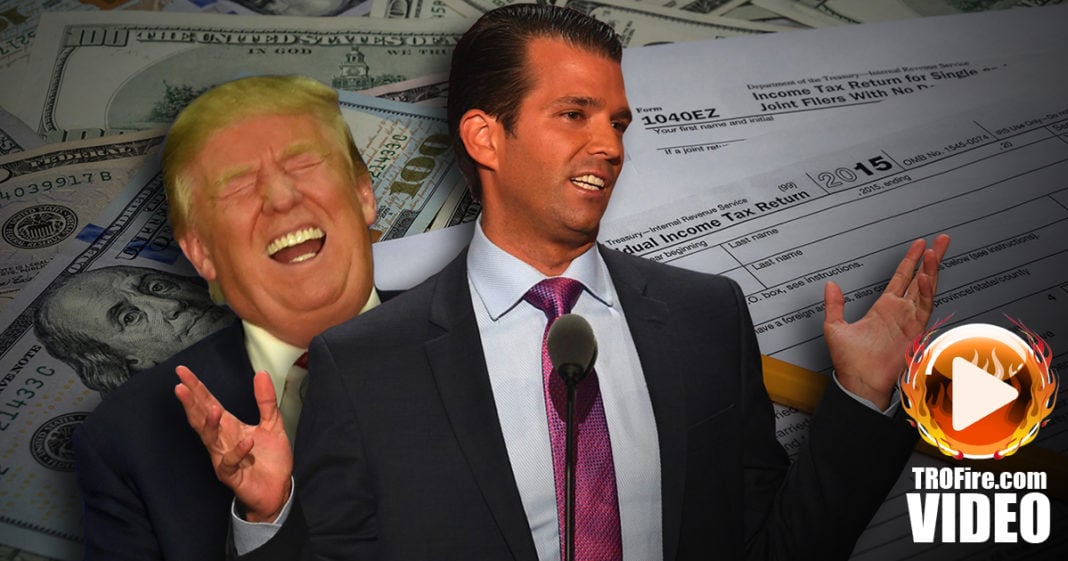 During a CNN interview, Donald Trump Jr. said that his dad can’t release his tax returns because then people would be able to scrutinize them. Apparently Trump Jr. doesn’t realize that that is the whole point of transparency. The Ring of Fire’s Farron Cousins discusses this.

On CNN yesterday, Donald Trump’s son, Donald Trump Junior, told people that the reason Donald Trump can’t release his tax returns is if he did then people would see them. I suppose junior doesn’t quite understand that yes, that is exactly why we want them released so that we can see them.

Junior’s concern is that if we release these people are going to get their hands on them, they’re going to start going through them, and everybody’s going to suddenly think that they’re a tax professional. There’s going to be all this scrutiny. It’s going to detract from Donald Trump’s main campaign message, so that’s why we’re not going to do this.

Listen, it’s not required the presidential candidates release their tax return. It is customary. Just like presidents debates, they’re not required, they’re customary. It’s a trend that started many, many years ago and continues to this day to the point that it almost is mandatory.

The only reason Donald Trump is hiding his tax returns is because he is hiding something. Any investigator, any lawyer, any police officer in the world, is going to tell you that only the guilty hide. That is exactly what Donald Trump is doing with his tax returns. There are things in there that he clearly does not want us to see. Until he releases them, which he never will, we can only speculate. Is it that he’s lying about his net worth? Is it that he’s not giving any money to charity, which we already know? Maybe he’s giving money to some pretty bad people, which also seems pretty likely. Whatever it is he doesn’t want us to see it.

Here’s the real irony. Back in 2008 and beyond that, Donald Trump was calling for Barack Obama to release his birth certificate, which he had already done. He wanted him to release his college transcripts, his medical records, any kind of record that President Obama had before taking office. Donald Trump demanded that that man turn it over to the public. Yet here he is, 8 years later, refusing to hand over his tax returns like every other person running for president has done in recent history.

Donald Trump is hiding something. If you don’t believe that then you are kidding yourself. He has something he doesn’t want us to know, but it’s our job, it’s the job of journalists, to continue to hammer him, to force a release of these tax returns.