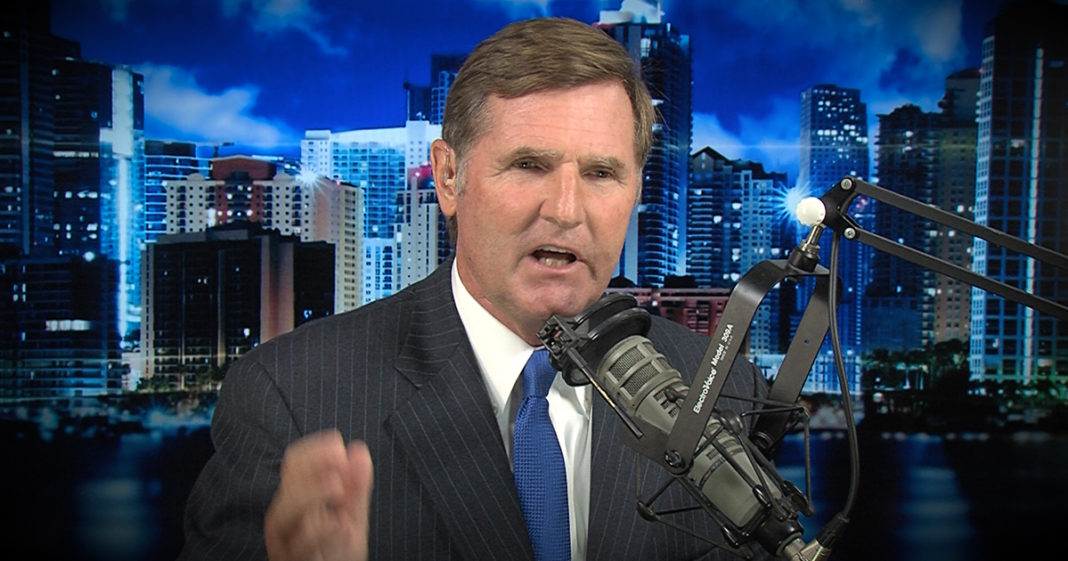 Ring of Fire’s Mike Papantonio speaks with Cliff Schecter about the total failure that the corporate controlled media has become, and how the days of true mainstream journalism are long and gone.

Cliff: When we went to break we were talking about it. I think you’re right. Your book delves into these issues, these very important issues. I often think that these days sometimes you guys who are trial lawyers the last line of defense we need in a democracy people to be educated about what some of these companies are doing. It doesn’t seem to happen anymore.

I think the point you make can’t be made enough times. What you said in the 1980s about the number 60 media companies down to 4 to 5. We used to have a fairness doctrine which is now gone. There used to be something where because the big stations got their licenses for free from the government there was this expectation they provide actual news. It was a public good. It wasn’t something that you tried to make profits on. It wasn’t about ratings.

Where’d all this go wrong?

When Hillary Clinton was talking about this maybe 6 years ago she would raise this issue and they’d say, “She’s a conspiracy nut.” No, she’s not and she wasn’t then and she’s not now. Truthfully the chickens have come to roost now. The average American is suffering because of it.

Cliff: Everybody from Thomas Jefferson and on, and many other of the great leaders of this country have always talked about the fact that if we don’t have any educated populous that’s what’s necessary in democracy. You can’t make decisions if the media doesn’t tell you the truth, doesn’t give you context when they tell what’s going on. This he said-she said these days. You know because you talked about the earth melting, climate change. It doesn’t matter if there’s a 99% of scientists say it’s happening. The other ones are cranks generally paid by Exxon, but that’s another story.

If you want to accurately convey that, I think Stephen Colbert did this once to be funny. He had 98 on one side and 2 on the other. Instead they do 1 versus 1 everybody believes the context is is that this is a 50-50 argument. We have these arguments all the time on so many issues.

Mike: We’ve got to tell both sides. That’s journalism. Most journalists, I forgot, I’m trying to think of who said it. Maybe somebody listening can tell you. They said that even in the 40s they said most of the time a journalist doesn’t know the difference between a story and a bicycle. It’s even worse now. The journalists coming through school, A, they’re not given permission to tell the stories. B, they’re usually unequipped to tell the stories because they really haven’t had the type of education, type of literary education that has them thinking in big terms. Most of them have abandoned the idea that Steinbeck is still relevant or that Conrad is still relevant because they never read the books.

How do you convert that to them telling a news story that has any meaningful impact on our culture or in democracy or on our society? It’s really unfortunate is the demise of journalism, the truest sense. The idea that we’ve become infotainment. That’s an old word now. It’s beyond infotainment. It’s absolutely propaganda. The last vestige of hope lies with you and in shows like this and social media.

Millennials know that. Millennials aren’t sitting in daddy’s chair, sit back listening to the nightly news anymore. They don’t really care what the nightly news has to say, thank goodness. There is a cultural shift and hopefully they’ll be some good come out of that.

Cliff: I feel like we simply have to do it through the outlets available that are part of a decentralized media that aren’t owned by the big guys. I wonder is there anyway you think to put that genie back in the bottle? I was throwing out some ideas on Twitter yesterday. It maybe completely crazy for all I know. Something like bringing back the fairness doctrine was one idea. Another idea, which is by law trying to do what we used to do by customs, which is to take profit out of the news business.

Mike: First of all I think, Cliff, we have to be honest about what happened. This idea of holding Bill Clinton up as this just fabulous president that was always there for the consumer, Bill Clinton knew exactly what he was doing with the Telecommunications Act. He understood that it was an invitation for the people with money to trounce on the people without money. He understood exactly what he was doing. The reason he did it is because he thought he could control, if he could consolidate some of the opinions, that he’s a pretty good talker. He thought he could control that in so many ways that they would love him.

They didn’t love him. They tried to destroy his presidency. To this day they don’t love him.

Mike: He was mislead by the idea of living past his Telecommunications Act. Same thing with Glass–Steagall that he did with Wall Street.

Cliff: I was going to say that. There’s some elements through his presidency, especially early on, family leave and some of these. The CHIP program, once they failed with healthcare where he seemed to get it. Later on with some of the deregulatory measures, and I look at the Telecommunications Act like you do up there with the Commodities Futures Act and Glass–Steagall is probably the 3 worse things that he did in his presidency. He did them all in that second term if I remember correctly.

Mike: He didn’t have to. That was the point. He didn’t have to. The problem is we’ve had to live with that. Everybody seems to go through life fat, dumb, and happy and say, “He’s the greatest pre …” He wasn’t. First of all we have to begin by being honest with ourselves.