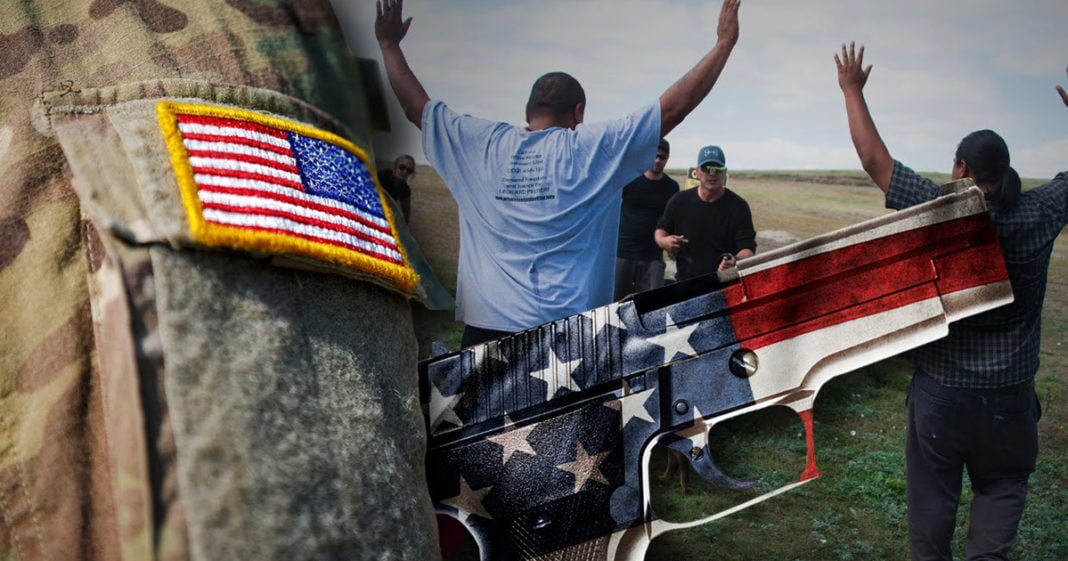 The protests over the Dakota Access Pipeline are still going on, but the National Guard has now been called in to get rid of the people who simply want to protect our drinking water. Armed to the teeth, these Guard members are arresting people by the truckload to allow corporations to have unfettered access to our natural resources. The Ring of Fire’s Farron Cousins discusses this.

The protests over the North Dakota, or Dakota Access Pipeline are still taking place even though President Obama has halted the project. The company I guess didn’t get the memo so the protesters are still out there trying to prevent this disastrous pipeline from being placed over several vital aquifers throughout the country. Now, recently, couple days ago the National Guard was called in and so the guard comes and decides that, “You know what, we’ve had enough. We’re going to start arresting these people.” While their guns are pointed at protesters they arrest at least 20 protesters. Some medics that were on the scene as well as two journalists, in addition to issuing a warrant for the arrest Amy Goodman, a notable progressive television and radio host who’s been at this for decades. One of the last real journalist out there, they want to arrest her for covering the pipeline.

Nonetheless, 20 people at least went to prison yesterday or jail, holding cells, wherever they take them, for protesting this disaster of a pipeline that this company wants to run through sacred ground held by the Lakota Sioux tribes, and other tribes of the Sioux nation. Now, what is deplorable about this is that these people have a right to protest. It is their land. It is their constitutional right to be out there protesting, and here we have armed guards show up with guns to take them to jail. That didn’t happen to the Bundy idiots when they were protesting the federal government trying to force them to pay taxes a couple years ago, didn’t really happen earlier this year. Those people get to occupy that wildlife refuge for over a month, the Bundy folks, but these protesters, peaceful protesters, “No. Let’s go out there with the big guns and arrest them because God forbid they’re trying to protect this country.”

We know from experience that oil and gas pipelines leak. The Keystone one pipeline, the pipeline that the mainly runs through Canada experienced one leak every three weeks in its very first year of operation responsible for untold environmental damage. There are still leaks along the way, the Keystone XL pipeline from the same company TransCanada would have done the same thing. This Dakota access pipeline will do the same thing if it is put into the ground. Pipelines leak, they burst, they rupture, they crack, they break, it happens. They’re dangerous and when they do that they poison water supplies for countless Americans or Canadians or wherever this pipeline is running through. That’s what these protesters were trying to protect. It actually had less to do with their sacred grounds and more about trying to protect the health of American citizens, and the government shows up gun in hand and takes him to jail.