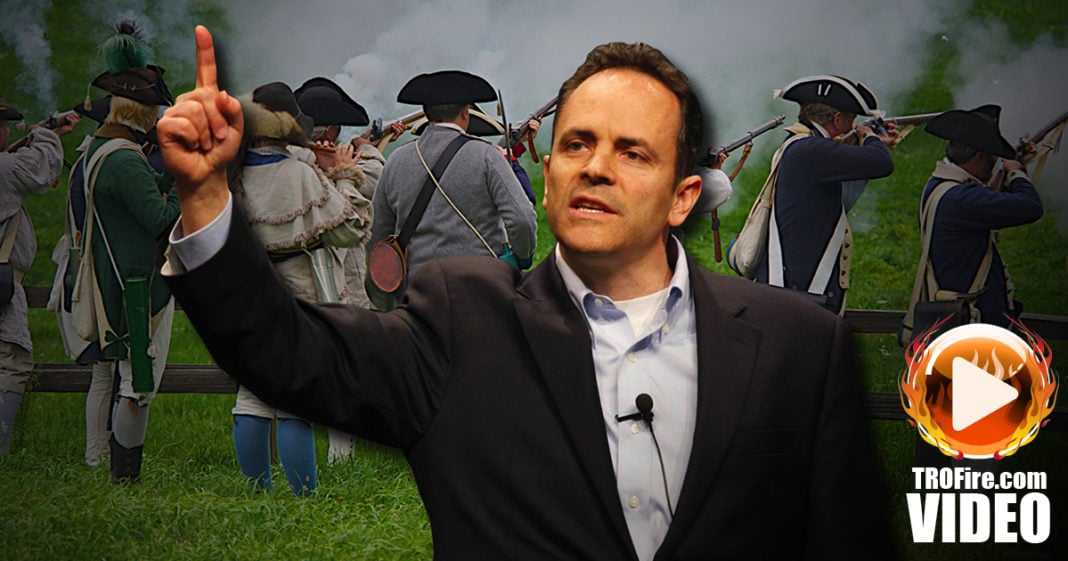 Kentucky governor Matt Bevin told a crowd at the recent Values Voter Summit that patriots may need to be willing to “shed blood” in the event that Hillary Clinton wins the presidency. The Ring of Fire’s Farron Cousins discusses this.

The Republican governor of Kentucky, Matt Bevin, spoke this past weekend at the Conservative Values Voter Conference in Washington, D.C. He warned people in that audience about the dangers of electing Hillary Clinton, but more specifically, about what we should do as a country if Hillary Clinton becomes the next President of the United States. What Matt Bevin, again Republican governor of Kentucky, called for during that conference was nothing short of political revolutionary insurrection in the United States. Bevin told the audience that he hopes that we don’t have to resort to physical violence to reclaim our country if Hillary Clinton wins, but if that does happen, patriots may have to shed their blood.

According to Bevin, it could even be people that were in that room right now or their children or their grandchildren, but regardless of who it is, if Hillary Clinton wins, Bevin is fairly certain that they’re going to have to shed their blood to reclaim their country. Those were his words, “reclaim the country.” What’s interesting about this is that, one, he is essentially calling for a violent insurrection against the established government of the United States, and by very definition, that is treason what he has suggested. Even if you joke about it, if you’re not quite clear, not even specifically calling for it but even suggesting it is treason.

Matt Bevin committed treason against the government this past weekend, an offense that should land you immediately in prison. Not going to happen. Nothing will happen to Matt Bevin. Nobody really pays attention to what happens at these little conservative conferences that they seem to have every other weekend. The point is, this is exactly what Trump voters and hardcore conservatives actually believe. They believe that their country is being taken away from them. When you get down to the heart of it, it really does have to do with racism and bigotry.

These white people that attended this conference, including Matt Bevin who is exceptionally white, they’re afraid of becoming minorities, and gee, maybe it’s because America doesn’t treat minorities so well. Look in the mirror, Matt Bevin. You helped create the hostility that America has towards minorities. It’s about time for that power structure to change, if you ask me. If white people were to become a minority, that’s not a bad thing. That’s not a problem. The problem lies only in people like Matt Bevin who see things in literally black or white, and that’s why he wants this violent insurrection. It’s not about reclaiming their country, it’s about reclaiming whitehood.