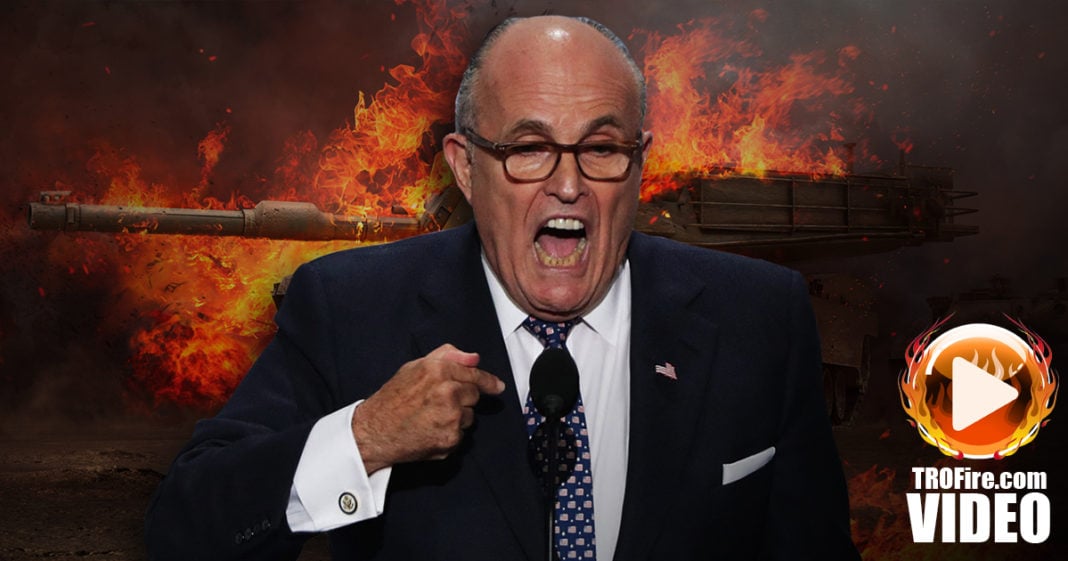 In an effort to defend Donald Trump’s “take all their oil” remarks, Rudy Giuliani says that anything is legal during war. Apparently these men need to read through some treaties and the Geneva Conventions before they speak next time. The Ring of Fire’s Farron Cousins discusses this.

Rudy Giuliani is still, for some reason, being put on the cable talk shows and this past weekend, he said something that really just shows how ignorant this former mayor of New York has truly become since he left office. Giuliani was on the cable shows talking about Donald Trump’s comments last week about how, to the victor go the spoils, and that in Iraq, we should have taken all the oil, and somehow that would have stopped ISIS from ever becoming a thing. Giuliani goes on there and says, “Yeah, we could have taken the oil. On top of that, we should have left and occupying force in Iraq.” Ironic that he would say that because we technically do still have that, but anyway, George Stephanopoulos says, “Wait, isn’t that illegal?” Giuliani responds by saying, “Well, during wartime, everything is legal.”

Look, I am not a lawyer. I’m not a foreign policy specialist. I don’t know a whole lot about all of the treaties, and conventions, and international laws that the United States has signed on to, but I do know that that is 100 percent not true. Just because you’re at war does not make everything legal. There are very strict standards, strict laws, that the United States and any other country that goes to war has to follow, lest they be accused and found guilty of committing war crimes. Giuliani doesn’t know that. He doesn’t understand that. This is a guy who still thinks that water boarding, it’s not really torture according to Giuliani, and according to Donald Trump.

These men, if Donald Trump gets elected, I guarantee Giuliani is going to have a spot in the administration. If not, he’s certainly going to have Trump’s ear as an advisor in some capacity. These men are out there, literally advocating for the United States to commit war crimes. That is what this presidential election has become at this point. Donald Trump knows nothing about foreign policy. He knows nothing about war. He knows nothing about diplomacy, and Giuliani is right there with him, cheering him on in the background, saying, “Go, Donald, go! Yeah, everything’s legal during war. Don’t worry about it. Oh, you want to shoot a kid in the head? Go for it! It’s legal. It’s war. You want to take all of their natural resources? Go ahead. It’s war. It’s yours now. You won.”

You can’t have that kind of mentality and hold the office of the president. That’s the kind of speaking that’s going to get the United States attacked again. When we go out there and we act like bullish idiots, you’re putting the entire country at risk, and Rudy Giuliani, above anyone else in this country, should understand what that means.