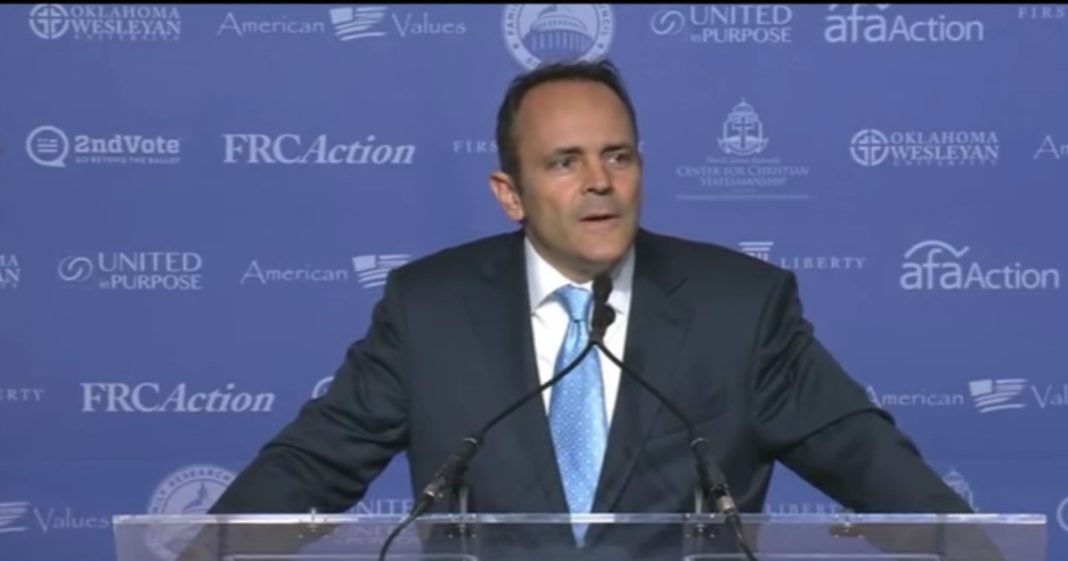 In the style of evangelicals everywhere, Kentucky Governor Matt Bevin made a vaguely threatening declaration while addressing Christians at the Values Voter Summit about what sort of bloodshed might occur if Clinton is elected president.

Harking back to vague threats of rebellion made by Donald Trump last month, Bevin said that if Clinton were to win, that the “tree of liberty” might be watered with the blood of “tyrants” but also the blood of his own children, among others.

“Somebody asked me yesterday, I did an interview and they said, “Do you think it’s possible, if Hillary Clinton were to win the election, do you think it’s possible that we’ll be able to survive? That we would ever be able to recover as a nation? And while there are people who have stood on this stage and said we would not, I would beg to differ. But I will tell you this: I do think it would be possible, but at what price? At what price? The roots of the tree of liberty are watered by what? The blood, of who? The tyrants to be sure, but who else? The patriots. Whose blood will be shed? It may be that of those in this room. It might be that of our children and grandchildren. I have nine children. It breaks my heart to think that it might be their blood that is needed to redeem something, to reclaim something, that we through our apathy and our indifference have given away.”

Bevin also urged the religious right to refuse to be silent and “be bold.”