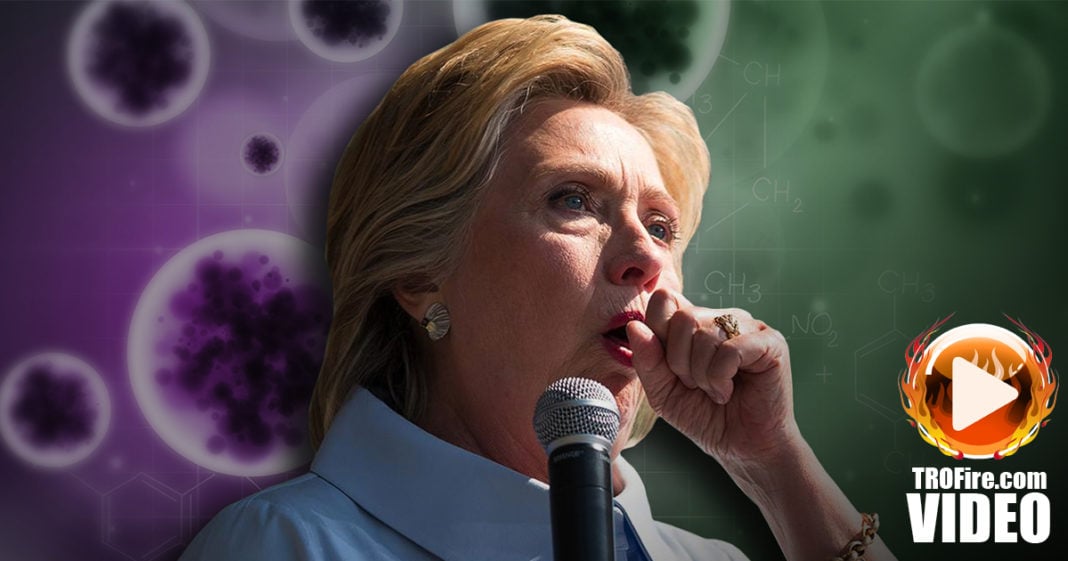 Hillary Clinton has pneumonia. Unfortunately, her campaign decided to continuously change their story about the NYC overheating event several times before actually being honest. That changing story has given the Trump campaign and conspiracy theorists unnecessary fuel to stoke their anti-Clinton fires. The Ring of Fire’s Farron Cousins discusses this.

Hilary Clinton has pneumonia. Some accounts say that she has walking pneumonia. This whole story even came about because over the weekend she was at a 9-11 memorial event, had to leave, and here’s where things got screwy. Her campaign said that she got overheated. It was exhaustion, dehydration, she got overheated, she went to Chelsea’s apartment in New York City, came out an hour or two later feeling great, feeling fine, everything is perfect. Then later in the evening, we find out that her campaign comes out and says, “No, she’s actually got pneumonia.”

I hate to even have to discuss this issue, because I don’t think that Hilary Clinton is any way, health-wise, unfit to serve as president, but just a week ago, we’re sitting here making fun of the right-wing, and the anti-Clinton people for jumping on Hilary Clinton’s coughing fit, saying that her health is fine, this is stupid, this is a non-issue, and now we have to come out and talk about this, not because she’s sick, but because her campaign wanted to cover it up. Instead of coming out and being honest about what happened at this 9-11 event, they tried to white-wash it, say she just got overheated. She’s wearing a Kevlar vest. It’s hot out there. It’s humid. New York is having this horrible heat wave. Whatever. Then, “No, wait. It’s pneumonia.”

You lied! The Clinton campaign lied to the public! That only further fuels the conspiracy theorists and the Trump people, because now they’re able to seize on this and say, “Look, they obviously weren’t being honest at first. Why in the world should we think that they’re being honest now?” That’s how it works, unfortunately, in politics and the media. They’re going to continue reporting these conspiracy theories because Clinton’s campaign has such a massive communications failure that they can’t just be honest with the public.

Another reason why this is even a campaign issue is because the Clinton campaign are the ones who put this out there to begin with. A year ago, before the first democratic presidential debate, David Brock, the founder of Media Matters, long time Clinton supporter, came out and said, “I demand that Bernie Sanders release his health records, his medical records, so that we know that he is fit to serve.” It was the Clinton campaign, the guy that started Media Matters, who came out first and demanded medical records from a democratic nominee. The Hilary Clinton campaign put this issue on the table, and now it’s come back to bite them. Bad campaigning all around. The Clinton campaign did come out, shortly after Brock made those claims last year, and distanced themselves from him, at the time, on that one particular issue, but again, now they’re reaping what they had sowed here. They put the health issue into the national dialogue a year ago with Bernie Sanders, and now they’re the ones having to come out and defend it, having to defend her health, and unfortunately they chose to lie about it first, rather than just being honest. That is going to hurt them in the polls.

Again, I do not feel in any way that Hilary Clinton’s health should affect her ability to serve. I have serious problems with Hilary Clinton: her environmental policy, or her Wall Street policy, her foreign policy, her economic policy, lots of those real issues. Her health is not one of them, but because her campaign couldn’t get it right, it’s not become an issue that they’re going to have to deal with until election day.