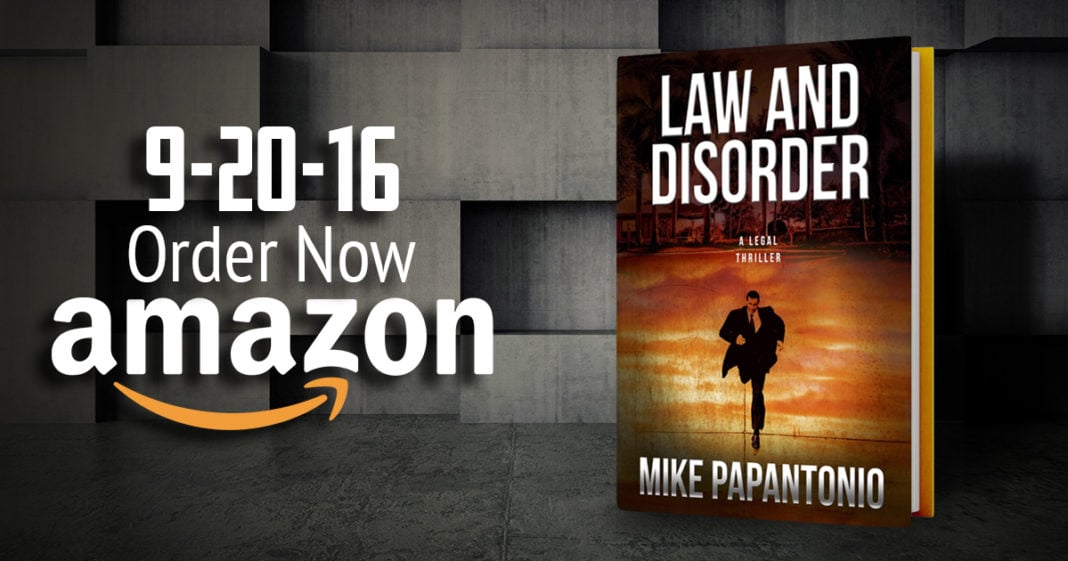 Mike Papantonio’s new novel, Law and Disorder, will be out next month. Recently, Sam Seder and Pap discussed the book and how Pap’s career as one of the most formidable trial lawyers in the country inspired his work. You can pre-order the book on Amazon.

Seder: We had talked about this big case. It’s the second case you’ve won now against DuPont over this C8 chemical. There are almost 3500+ cases to go. You’ve already won two cases for millions of dollars. We’re talking about cases, if you tally them up, well into the billions of dollars. Yet, for DuPont, this could just be cost of doing business. You outlaw … I should say, You outline that dynamic in this fiction book, “Law and Disorder.” How does … I know I may be jumping the gun a little bit, but the lead character, who you call Deke, how does his career parallel your own?

Papantonio: Well, what I’ve done, Sam, is I’ve borrowed from I think some of the best, complex trial lawyers in the country, people who … There’s only a handful of us throughout the entire country that try very complex cases against companies like Merck and Johnson & Johnson and DuPont and Dow Chemical. After working with so many of them, those people, at least, for 35 years, I took Deke. Deke is a really composite, Sam. He’s a composite of all of these lawyers. It’s impossible to write a book like this and not borrow a little bit from yourself, and the good and the barnacles. That’s what Deke is.

Deke is going to appear in a series of books that is … Nicholas Deketomis is the character. It’s in a setting where he’s confronting exactly what we do for a living. It’s not told … Although Publishers Weekly wrote a very good review of it, they said sometimes, when I talk about politics, I become a little preachy. I think I do. I think the idea is the story has to be told. Some of these political stories have to be told. For example, in this “Law and Disorder,” we talked about a product called Ranidol, which is a birth prevention pill. That’s just one of the stories. It’s one of the stories that tells about a similarity that we could name in five other cases that actually took place just within the last 20 years, where somebody dies because of the birth control pill.

It also goes into a story about pollution that’s causing exactly the kind of cancer from the case that I just finished up in the Ohio Valley. It lends itself to so many stories and so many parts of the stories, the backstories, that the media doesn’t tell. They’re not even permitted to tell them, Sam. If I … For example, a you know, there was a period of time when I was doing MSNBC as a contributor. There was no way I could tell these stories on MSNBC.

Seder: Well, because they’re advertising. They cut to you and go to the advertiser you just talked about.

Papantonio: That’s correct. Fortuitously, I was contacted by RT Network, Russian Television International, to actually come on and do a regular show where these stories are told. That story … That show begins in September. It’s called “America’s Lawyer.” I’ll be dealing with some of the best, interviewing some of the best lawyers in the country, where they tell the backstory, Sam. It’s not just the headline. It is who are the CEOs who committed this fraud that should have them actually in prison? Who are the lower level managers who destroyed documents to try to cover up? Who are the scientists that were paid big money to make up a fabricated story saying the particular product is safe? Who are the regulators that were paid off in order for this to all occur?

Those are the stories that will be told on “America’s Lawyer,” which is really an extension of what I’m trying to do with these fiction books, to tell a story that you can read on the … You can read the story on the beach.

Papantonio: It doesn’t take long. You can read the book in a day, day and a half. You can come away and say it was a good story, but you can also say, “I learned an awful lot in that story.” Sometimes, that’s the only way. That’s why I think Grisham is so brilliant. Grisham is brilliant because, if you read a Grisham novel, you’re going to hear things that you’ve never heard to where you almost go, “Is that true?” Most of what he does is true. This is kind of an extension of that very thing, maybe a little more detailed because this is actually what I do for a living. Grisham is an attorney, but I don’t know that he did this day to day. We’re trying to fold in some stories and the backstories to those stories that I think make it particularly interesting.

Seder: Well, I … Frankly, I think both the show and the book couldn’t be more timely. Knock on wood, we’re going to have a Democratic president appoint the next Supreme Court justice who will sit in place of Antonin Scalia, tilting the court at least nominally to the left. I think there’s a lot of cases about arbitration and about wage theft and about issues, access to the courts …

Papantonio: They can be turned around, yeah.

Seder: I think … They can be turned around. I think this is a time, and certainly “Law and Disorder,” which people can find at lawanddisorderbook dot com, and your new show, which starts in September, “America’s Lawyer,” are going to be two really important pieces in making Americans genuinely appreciate the role of plaintiff attorneys and the need to push back against this corporate mal- and misfeasance. Of course, you doing … I’m excited because, now I know you’re out of the heat of the battle, we’ll have you back on “Ring of Fire” a lot more.

Papantonio: Yeah, please do, Sam. I appreciate that.

Papantonio: I’ll be glad to appear in as much as you want me to, and talk about a lot of these things that you and I used to talk about.

Papantonio: I just reached a very busy point in my life where I just didn’t have a minute.

Papantonio: By the way, it’s amazing the way you continue to build and build the audience with “Ring of Fire” throughout this country. There’s not a day that goes by where I’m not reminded by somebody calling me or e-mailing me and say, “Caught the show again. Sam is a superstar.” I really appreciate you doing that, continuing the spirit of “Ring of Fire.”

Seder: Pap, thanks so much. We’ll talk to you soon.