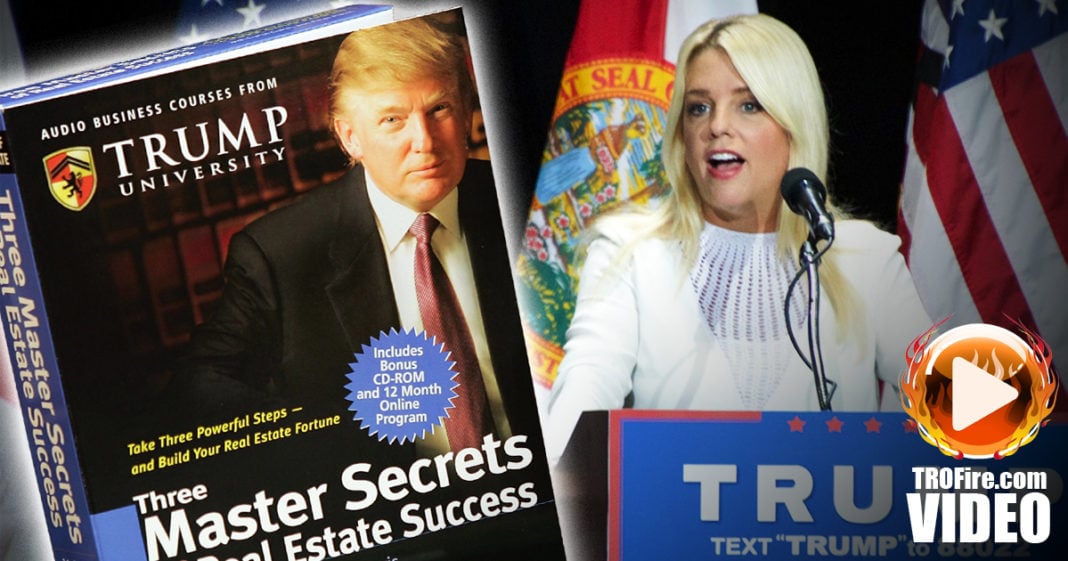 The Trump Foundation’s $25,000 donation to Florida attorney general Pam Bondi can only be seen as one thing – A bribe. But that’s just the tip of the iceberg of this disgusting tale of political corruption. The Ring of Fire’s Sam Seder and Farron Cousins discuss this.

Seder:
Farron, let’s start with this story about your attorney general there in Florida. I’m speaking of course about Pam Bondi. This is a story that we heard a little bit about several months ago, but it’s come back around.

Cousins:
I’m really happy that it’s actually finally back out there in the ether again. It’s something that we had covered back when it first broke, but basically, we’re looking at a pay to play here in the State of Florida. When Pam Bondi was seeking reelection right as she was deciding whether or not to investigate Trump University for scamming students in the State of Florida if they wanted to join that investigation, Donald Trump comes in with a $25,000 donation.

Suddenly, investigation dropped and there’s some discrepancies between what Donald Trump has said about this situation and what Bondi says because Trump claims never spoke to Bondi, never talked with her, this was just a donation to help her out. On Bondi’s part, they claimed that her campaign reached out to Donald Trump specifically and asked for the money, asked for some fundraising help and got it from Donald Trump.

What we’re talking about is bribery. That’s the way this is being looked at now. CREW, the Citizens for Responsibility and Ethics in Washington has filed a bribery complaint with the Federal Election Commission, hoping that they will look into this and understand that it is a very clear pay to play in this situation. The money was given from the Trump Foundation, a nonprofit, tax-exempt organization to Pam Bondi with the express intent, according to CREW, of squashing this Trump University investigation.

In terms of the law, it does not get more cut and dry than that. That is bribery if you’re able to prove this quid pro quo here and that’s exactly what CREW is trying to do.

Seder:
Yeah. Let’s be clear, there’s multiple scandals here, frankly. The first is the most obvious one. That is Donald Trump’s Trump University was being considered for investigation even before Bondi took office in 2011. The previous Florida Attorney General Bill McCollum had received a lot of complaints on Trump University, as a lot of attorney generals have. In fact, we have multiple investigations around the country as a function of Trump University and you know Farron how this works.

An attorney general’s office, they have basically different silos of potential or active cases. Some cases are they’re determining whether or not they’re going to actually start an investigation. Some are already being investigated or there is an investigation. Obviously, before something becomes a formal investigation, they do a little bit of noodling around which I think in layperson’s terms, we would call an investigation, but it’s not technically.

The reason why I make this point is, if you watch Pam Bondi when she is been on TV over the past week denying that there was any relationship between the $25,000 she sought and got from Donald Trump and her subsequent quashing of the Trump University investigation, she will say … She’s a lawyer now folks. She knows how to parse her words. She will say, “I had no knowledge of an investigation of Donald Trump’s Trump University.” Well, that’s because there was not one because the question on the table was not what was in fact whether or not the attorney general should start an investigation.

She’s very clever here when she’s issuing these denials. She’s not saying, “I wasn’t aware that there were complaints.” She’s not saying, “I wasn’t aware that my office was considering whether or not it would go forward with an investigation.” You can bet, if an attorney general’s office is looking at complaints in making a decision as to whether or not to launch an investigation, the attorney general, when it comes to Donald trump is going to know one way or the other.

The other scandal like you mentioned is not just that there could have been this bribery, but that the money came from a supposed charitable institution and if you dig in to how they reported it, they didn’t. It was hidden. The only reason why the money showed up was because it showed up on Pam Bondi’s disclosures, not on the charitable organizations. That’s why this story came back because the IRS made Trump pay a fine, 2,500 bucks. Obviously, it’s chicken feed, but acknowledging that, “Okay. You’re not supposed to use a charitable organization to give money to an attorney general. Never mind, one that may or may not be investigating you.”

The third scandal here is is the whole fundraiser Mar-a-Lago, which took place months later where the state did not acknowledge the value of a function hall at Mar-a-Lago for the actually price that it would be worth if you were holding a fundraising there. This is pretty stunning because you have this crappy foundation that Donald Trump has that nobody can seem to find out what it’s giving money to, other than Pam Bondi. All we hear in the press is about the Clinton Global Initiative, which by every charitable third party charity raider has done quite well.

You may say that there’s a co-mingling of interest and whatnot, that’s a different story, but in terms of the legitimacy of a foundation, there’s no comparison and there’s never been a charge. I mean, this isn’t even … And you see Trump’s surrogates going on. They’re saying, “This is part of the process. This is one of the things he fight against.” Look, Donald Trump’s already said he gives money to politicians to get them to do what they want. Well this isn’t a I get access and so I get my policy wishes championed by this politician. This is going and paying a cop to basically not arrest you after you’ve committed a crime.

Cousins:
What’s interesting here, again, when we talk about the timing of this, we’re looking at polls in Florida. Hillary Clinton is obviously still ahead, but that lead in the State of Florida is starting to shrink a little bit. For Donald Trump, this is really bad timing for this story to come back out there and be discussed and have a spotlight shown on it because he was starting to gain a little bit of ground. This could help to swing the polls back in Hillary Clinton’s direction because obviously, just like in past elections, Florida play a huge role, very big swing state, a lot of electoral votes, and so, if this hurts Trump in Florida, it’s going to possibly derail the entire Trump campaign because Hillary’s still ahead in Ohio, Pennsylvania, Texas is considered a swing state at this point. Trump needs Florida and this is not going to help him at all. [crosstalk 07:53] for some voters here.

Seder:
Look, this goes beyond the election. I would imagine right now and I certainly hope that there are reporters in Florida filing the state equivalent of a freedom information act because there is no doubt that there are memos internal to the attorney general’s office discussing of the disposition of the case against Trump University. The question is, is Pam Bondi’s name on any of those memos because she’s claiming she had no knowledge of Trump University, of any investigation. Of course, like we say, there wasn’t an investigation. There was a question as to whether or not they’re going to launch one.

If she’s on those memos suggesting, “We should need not to worry about the Trump University,” after she’s received this $25,000 check and I guess presumably a promise of like, “And I’ll hold a fundraiser for you at Mar-a-Lago,” which is basically saying, “I’ll be a bundler for you,” then Pam Bondi had some major questions to ask. Like I say folks, go back, look at Pam Bondi’s face when she’s on Fox Business, supposedly a safe haven answering questions about this, this is not someone who is confident that they have done the right thing in this situation.

I think there’s a lot more to this story and it’s going to implicate a lot more than just this election. This is bribery folks and Donald Trump has publicly stated he gives money to politicians to get them to do what he wants them to do. When you’re asking an attorney general not to investigate your criminal, fraudulent activity, then I think that’s something that other investigators tend not to overlook. This is a real question as to whether or not this is going to die down.