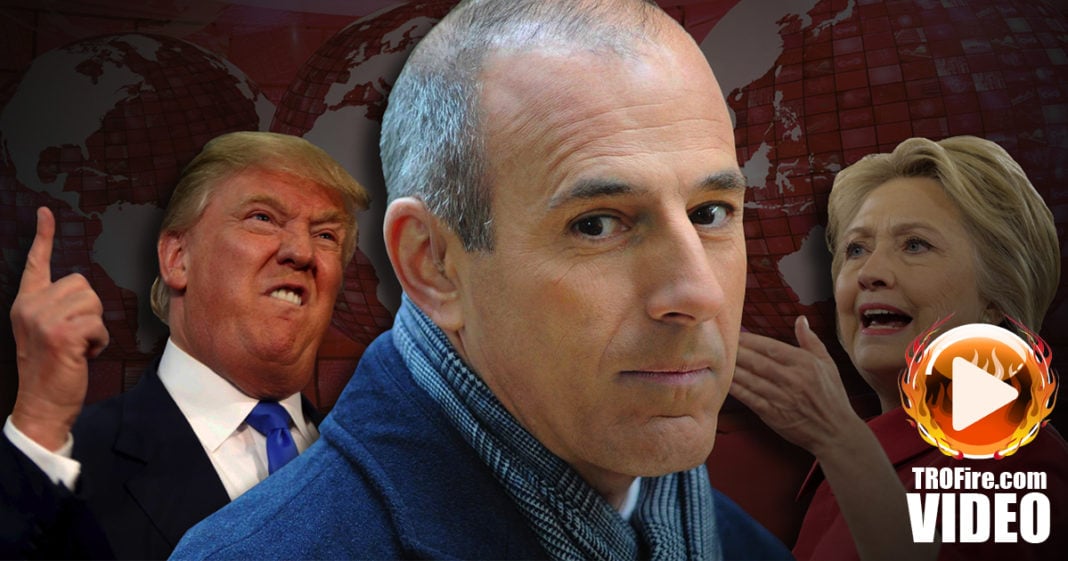 NBC News held their Commander in Chief forum Wednesday night, and moderator Matt Lauer failed on so many levels. Rather than calling out lies or focusing on issues, we had an hour of softballs and conspiracy theories. The Ring of Fire’s Farron Cousins discusses this.

Last night NBC News put together this Commander-in-Chief Forum with Hillary Clinton and Donald Trump, moderated, if you can call it moderating, by Matt Lauer. The whole thing was supposed to be about foreign policy, veterans affairs, war, things of that nature, something that Hillary Clinton knows a lot about, not saying good or bad, but she knows a lot about it, and something that Donald Trump is a complete idiot about. The real story here is not necessarily Clinton’s answers or Trump’s non-answers, it is Matt Lauer’s pathetic job as the moderator of that little forum.

Each candidate was given 30 minutes. Hillary Clinton went first, and for 12 of those minutes, Matt Lauer wanted to talk about Hillary’s emails. This is supposed to be foreign policy. There were veterans in the audience asking questions, but it was all about her emails for almost half of her allotted time. Then when she finally gets around to talking about ISIS, because Matt Lauer’s allowed her to move on, he tells her to speed it up, because they don’t have much time. Yeah, ass. They don’t have much time because you spent it talking about emails.

As for Donald Trump, Donald Trump gave a lot of answers. There were a lot of questions, a lot of answers, probably some of the best answers ever because Donald Trump talks to people, lots of people. Lots of people know him and the polls show that. That right there was basically the extent of what Donald Trump said after every single question he was asked. There was no substance. He threw out a few numbers that all turned out to be wrong, but it was just nothingness. Just words coming out that said, “I know people. People know me. I’ve talked to people. They’ve talked to me. We’ve decided some things, but I can’t tell you those things because then ISIS would know those things and then oh my god, I don’t know what’s going on.”

That’s the Donald Trump campaign, and Matt Lauer just allowed this word salad to spew out of his mouth and allowed Donald Trump to continuously lie about when, whether or not he supported the Iraq war, about whether or not he supported the Libyan invasion and the overthrow of Muammar Gaddafi, which he did support, regardless of what he says. Yeah, Lauer failed miserably, and if last night is any preview of what we’re going to see in the presidential debates, then we’re in for a very long nine weeks here, because last night was all about optics, all about forcing candidates to be uncomfortable, and there was not one second of anything substantive discussed during that NBC News Commander-in-Chief Forum.