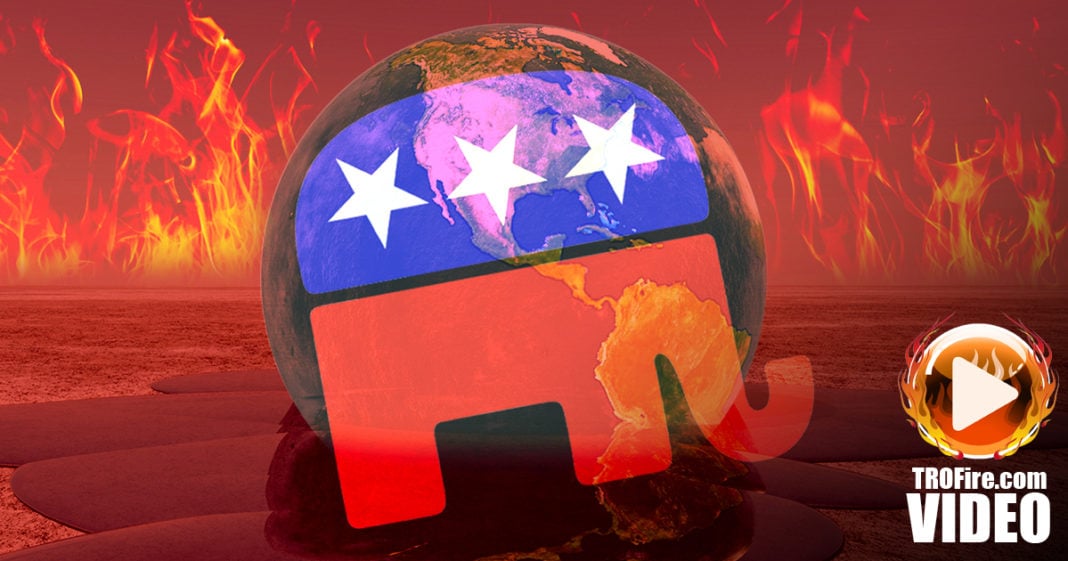 Polarization on the issue of climate change has hit a new high in the United States as Republicans continue to ignore the warning signs all around us. The Ring of Fire’s Farron Cousins discusses this.

According to the latest studies, polarization on the issue of climate change in the United States has reached an all-time high, meaning that the difference in views on climate change between Democrats and Republicans has never been further apart. Now, we do have in the United States a majority of self-identified Republican voters who believe that climate change is real. Where most of the disconnect occurs is what is causing climate change because we still have far too many Republican voters who believe that it’s just the natural cycles of the earth and has nothing to do with the fact that human beings are emitting more carbon dioxide which is heating up the planet. That is a problem.

It’s great that they accept the fact that the world is heating up, but it’s not so great when they don’t take any personal responsibility for it, considering the fact that the Republicans are supposed to be the party of personal responsibility. The other problem is that we have far too many representatives in Washington, D.C. The vast majority of Republicans representing citizens in Washington, D.C. do not believe in climate change, flat out say it’s not happening, it’s not real. “Scientists are lying to you. It’s a big hoax. It’s some kind of scheme that scientists have come up with.”

In fact, the Republican presidential candidate Donald Trump has even once said, he claims he might have been joking, that climate change is a hoax and that the Chinese were somehow pulling it off. Don’t quite follow the logic there, but that’s typical for most of the things that Donald Trump says. Now, we have seen recently parts of California absolutely on fire as a result of the drought that dried things out and caused these massive wildfires. Louisiana was under water for several weeks. We just had a hurricane come through Florida and then wreak havoc upon the East Coast. How many more things have to happen before we look around and say, “You know what? We’re doing this. We’ve screwed up. We’ve hit the point of no return.”

Now, Republicans may not ever believe it. The ironic thing though is that their donors believe it. Big banks and insurance industry leaders from around the world recently told the G20 Summit that you have to reduce carbon emissions to stop climate change. Now, these are industries that give most of their money to Republicans in the United States, the party that’s actively fighting to do anything about climate change. They don’t want anything done whatsoever.

Yet, these industries know that climate change is going to kill them, but they’re still unwilling to stop giving money to the idiots that are preventing progress. When the planet finally burns down, Republicans will still be in denial. Their home could be on fire, their neighborhood could be on fire, and they’ll say, “Well, this is just the natural cycle of fire. It sometimes comes and goes. This has nothing to do with the fact that it hasn’t rained here in five years because of climate change.” I don’t know that you can change Republican minds on this issue, but what I do know is that these companies that are so terrified of the effects of climate change on their industries, they could stop funding those politicians’ campaigns.