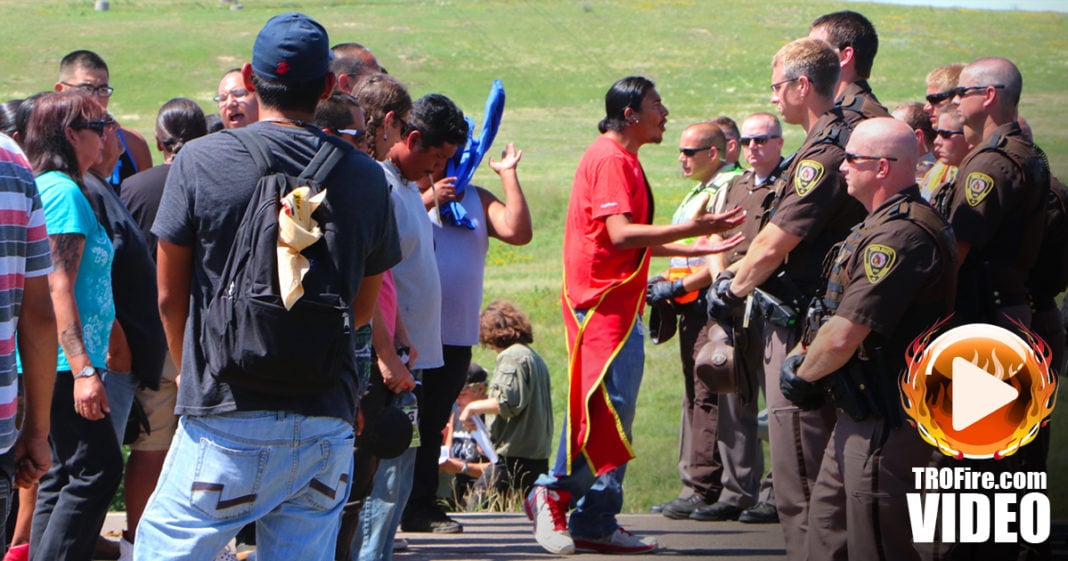 Native Americans in North Dakota have spent the last few months protesting the construction of a $3.8 billion gas pipeline from running through their private land that contains numerous historical sites. This past weekend, things took a turn for the violent when the company’s security forces unleashed dogs and pepper spray on the protestors. The Ring of Fire’s Farron Cousins discusses this.

You probably haven’t heard about this from the corporate media, but for the last several months, several hundred members of the Lakota Sioux tribe in North Dakota, as well as other Sioux tribes all over North Dakota and South Dakota have been protesting the proposed construction of the Dakota access pipeline, which is a 3.8 billion dollar pipeline designed to move oil and gas through basically Native American lands that are considered sanctuary sites, historical sites for the tribe, and to be perfectly honest, it’s just their private property. In general, something that I thought republicans were all about preserving.

Here’s the thing. This has been going on for many months. They’ve built an encampment. They’re peacefully protesting, but this past weekend, things took a turn when the private security company hired by the Dakota Access Company decided to take things to a violent level. They began to seek dogs on some of the protesters and pepper sprayed at least 30 different people.

The pipeline company claims that the protesters broke through a fence and were attacking them, yet there is really no evidence to support any of those claims. There are however dog bite marks on a small child who is a member of the Sioux tribes that were protesting, so we can pretty easily prove that yes, the security forces did allow their security dogs to attack these Native American protesters.

What are these Native Americans protesting? Why don’t they want this pipeline there? As I pointed out, one, because it’s their land. Their land that they have had for centuries. Historical sites, ancient burial grounds for the tribe. This is basically all that they have left after the United States government took it from them hundreds of years ago.

Again, the corporate media, not talking about this, whatsoever. Why is that? Well because the oil and gas industries are huge advertisers on the corporate media. After all, if they were to talk about this protest and what this company is trying to do with this pipeline, there’d be no way in hell the public would allow them to build this. Instead, MSNBC is going to ignore the allegedly liberal or left leaning news outlet because they get advertisers like Exxon, and fracking companies all over the place. CNN won’t do it. Fox News basically gets their talking points from the oil and gas industry, so nobody’s going to talk about this.

These people have been out there for months. They’re fighting for all of us, not just for themselves and most people don’t even know that it’s happening.