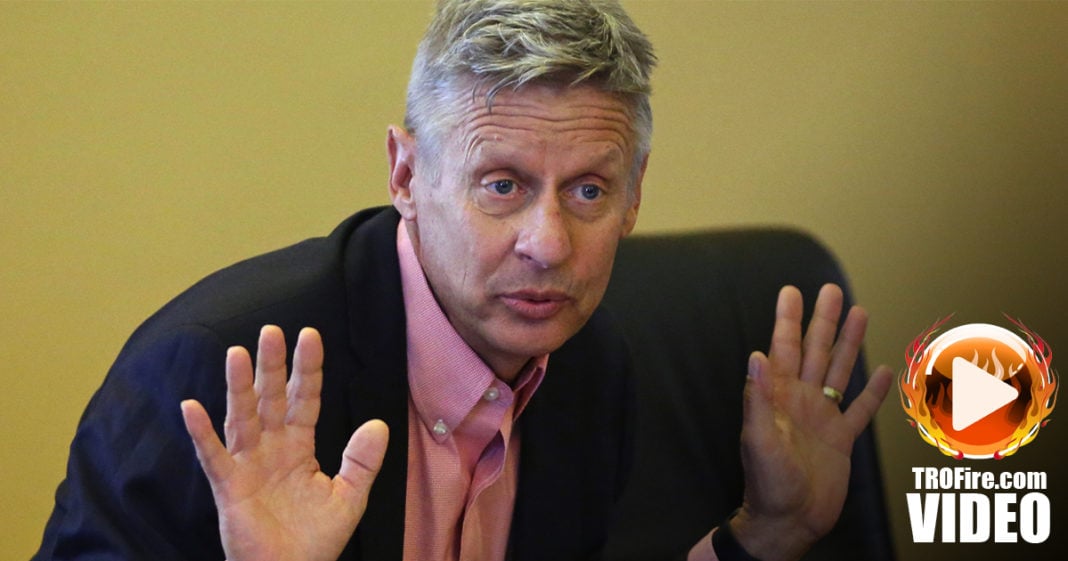 Gary Johnson’s campaign is gaining some momentum, and he’s now actively courting Bernie Sanders supporters. But anyone who jumps on the Johnson bandwagon needs to understand that his policies are dangerous, and there’s very little difference between Johnson and his far right opponent. The Ring of Fire’s Farron Cousins discusses this.

Right now, Hilary Clinton and Donald Trump are statistically the two most unliked candidates in modern political history of running for president. As such, obviously, third party candidates are starting to gain a little bit of traction. Nobody more so than Gary Johnson, the libertarian candidate, who is seen by many on the republican side as a good alternative to Trump. He is now actively courting former Bernie Sanders supporters because he believes that his progressive policies could actually win over some of those people and, to be honest, he sort of has, to a very small extent.

Make no mistake, there is nothing, nothing, progressive about Gary Johnson, the libertarian candidate. There is nothing moderate about him. There is really nothing sane about him, with the exception of his views on social issues. Let’s look at his time as the governor of New Mexico. During that time, he introduced the private prison system into New Mexico, which turned out to be an absolute disaster. He advocated austerity cuts to the budget while at the same time, gave massive tax breaks to the wealthy. He was very hard against labor unions and helped to weaken collective bargaining rights of employees. If any of this sounds familiar, it’s because that is republicanism 101. It’s also libertarianism 101 because really, there’s no difference between the two except for a few social issues.

Gary Johnson hates organized labor. He hates the thought of workers going out there, trying to make their own lives a little bit better. What Gary Johnson loves is corporations, private businesses running things that the government is suppose to be running things, like schools, fire departments, prisons, infrastructure projects. You name it, Gary Johnson wants to privatize it because according to Johnson and his libertarian ideology, anything the government can do, private companies can do better. You know, the same private companies that brought us the Exxon Valdez oil spill, or the Deepwater Horizon oil spill, or the banking crash of 2008, the stock market crash, the housing market collapse, the fracking earthquakes. Those private companies, according to Gary Johnson, are so much better than the federal government.

Here the thing. Gary Johnson is not a smart alternative to any candidate. Look, I have no respect for libertarianism, because I don’t respect someone who says, “Put me in charge of this thing, so that I may destroy it from the inside.” That is not what we need in our government, that’s not what need in our politics, but that is exactly what you will get with Gary Johnson.