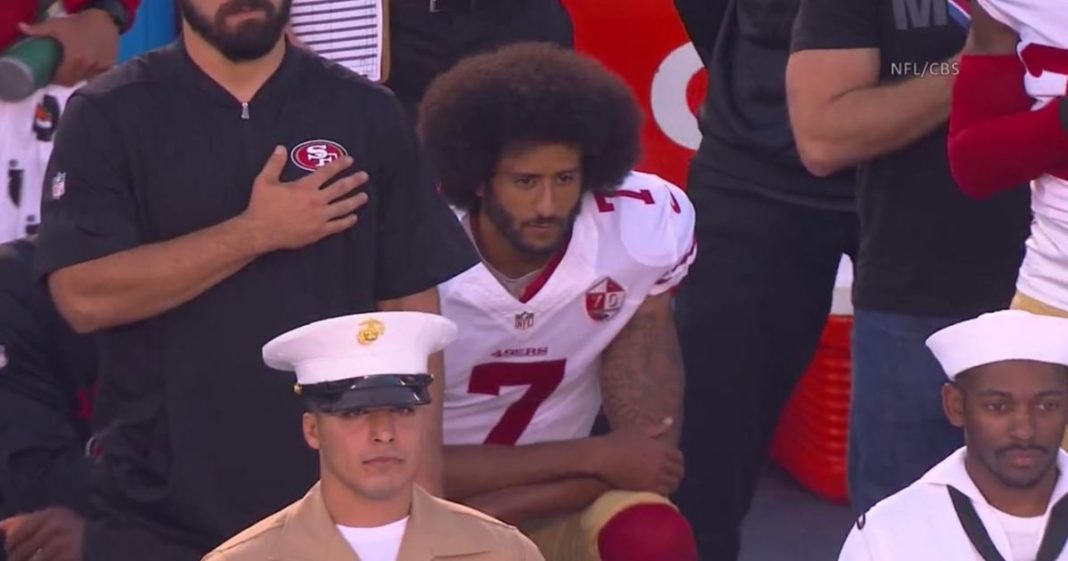 NFL athlete Colin Kaepernick rose to national prominence last week for his political choice to remain seated during the national anthem at a preseason game. Kaepernick later said that he felt he could not stand and honor a nation which continued to allow the murder of innocent black people by police brutality with no consequences.

Many responded in fury, some burning jerseys bearing Kaepernick’s name, but others stood behind Kaepernick and his right to remain seated.

On Thursday, all eyes were on Kaepernick to see whether or not he would continue his political display or bow to the pressure. Kaepernick’s team the San Francisco 49ers played against the San Diego Chargers at the Qualcomm Stadium where the host team held a “salute to the military” event. Veterans were in uniform and holding parts of a giant flag, thereby raising the stakes of whether or not Kaepernick would make his move.

Rather than remaining seated on the bench as he had done previously, Kaepernick took a knee on the field in a show of respectful protest when the national anthem was played. He was joined by teammate Eric Reid who had convinced him to take the new position in order to reconcile the anti-military sentiment some assumed from his previous protest.

Though he softened his stance, Kaepernick was still greeted by loud boos from the crowd whenever he stepped on the field and many no doubt still hate the man for his simple protest.