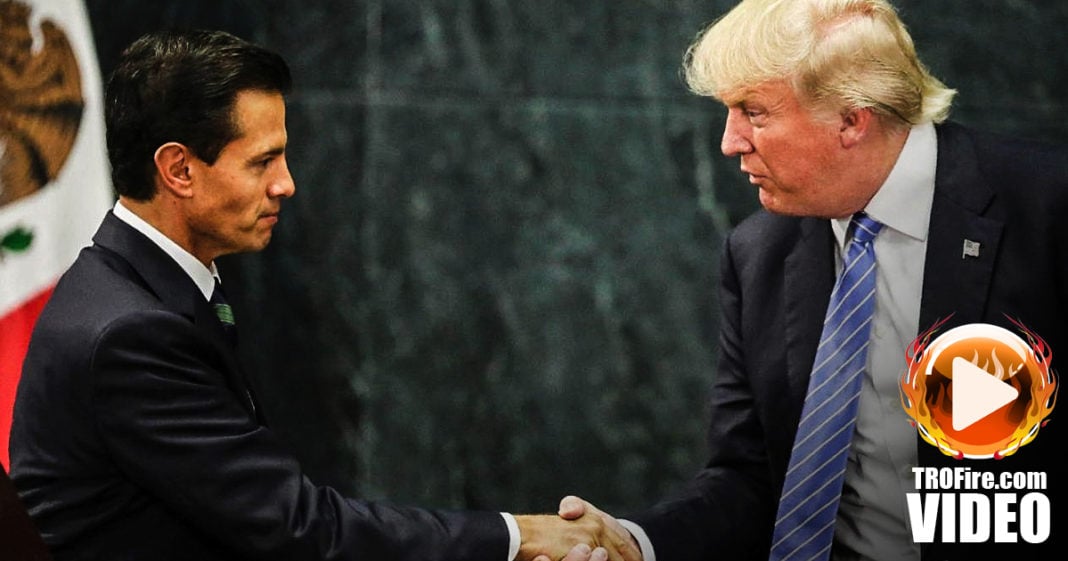 Just a few hours after returning from a trip to Mexico, Donald Trump took the stage in Phoenix where he laid out one of the most oppressive, regressive, and racist immigration policies that the United States has ever seen. Ring of Fire’s Farron Cousins discusses this.

Yesterday Donald Trump decides he’s going to head on down to Mexico, meet with the Mexican president. They talked about some things. According to the Mexican government, the border wall did come up, and it was made expressly clear that they would never, ever, ever pay for it. Donald Trump came back, told a different story, said they didn’t even mention the wall, but that’s not the important part of the story. That little trip down to Mexico was all about optics. What is important is the fact that just a few hours after he got back from Mexico, a few hours after he stood at that podium next to the president of Mexico saying, “Look, I love Mexican people. You guys are great. You’re wonderful. You’re terrific. I have lots of Mexican friends,” just a few hours later, he takes a stage in Phoenix, Arizona, and lays out one of the most racist and oppressive and backwards immigration policies that this United States has ever seen.

Even more disgusting, he pulled families up on stage who had had a loved one killed by an illegal immigrant, let them cry, let them work the crowd a bit, hugged them and sent them off. Now, I feel for those families. That is a very tough thing to ever get over, if you are even ever able to get over it. They are not the problem. The problem is Donald Trump exploiting these people, these people who have suffered these horrendous tragedies, just in order to get votes, just in order to drum up hatred and fear among his idiotic base, because that’s all that was. Donald Trump is out there, and by pulling these people up on stage, he is telling us that, “If we don’t stop immigrants from coming into this country, you’re going to die.” That’s what he’s telling us. “Every single immigrant coming across that border wants to kill you, so you’ve got to elect me so I can build that wall and stop them.” Again, this was just hours after he returned from a trip to Mexico.

Wisely, he did not do this speech before his trip to Mexico, because I can promise you probably would have ended a little bit differently for him, but this campaign has gotten so sick and disgusting with this fear, this hatred of immigrants. No, Donald Trump has not softened. He never softened his stance. He is out there being more hateful than ever at this point, and anyone who says that, “I support Trump,” anyone driving around with a Donald Trump bumper sticker on their car, can and should, at this point, be classified as either a racist or an idiot, because that’s what you would have to be in order to support someone as hateful and bigoted as Donald Trump.