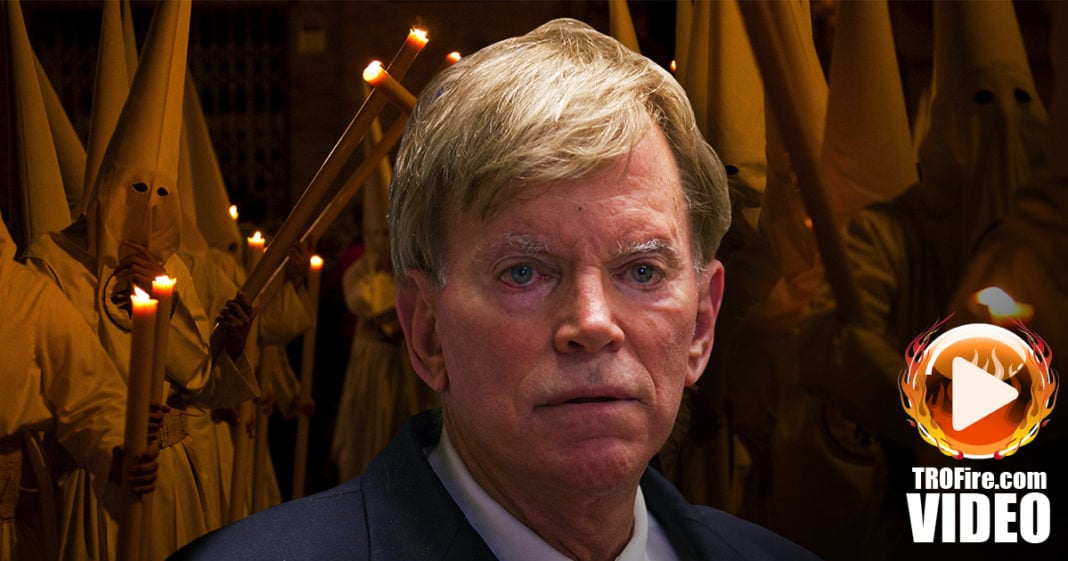 David Duke, the former Grand Wizard of the KKK, is running for a Senate seat in Louisiana. The state was given the chance to prevent him and others like him from running for office this weekend, but they decided against it. The Ring of Fire’s Farron Cousins discusses this.

David Duke, the former Grand Wizard of the KKK, is running for a Senate seat from the state of Louisiana being vacated by U.S. Senator David Vitter. Now nobody in the state seems overly happy about having a former leader of the largest racist organization in this country running for their Senate seat. This past weekend, Louisiana party leaders got together to come up with a plan to make sure that this kind of thing didn’t happen.

What did they do when they drafted that plan? They decided, “Screw it. We don’t need to do this. This is a little bit too oppressive even for us.” Basically, the plan that they had laid out was that if any candidate had a felony on their record, as David Duke does, they weren’t going to let them run for office as a Republican. Furthermore, if they didn’t have a felony but had some questionable ties, if the state Republican Party voted three-fourths, then that person would not be allowed to call themselves a Republican in an election. They wouldn’t get the R. They wouldn’t get the party’s official backing, and the party would still be free to run another Republican.

Louisiana Republicans, they don’t really hate David Duke. They’re pretty much all David Duke. I guarantee you a lot of them know him personally, and so they decided, “You know what? We’re just going to let racists run it. We’re going to see what happens. Maybe it’s going to work out for us. I don’t know.” This is sick. Louisiana is in horrible shape right now. Their economy sucks, and half the state is under water right now. They really have nothing going for them at the moment, so they just say, “To hell with it. We’re going to let this former Grand Wizard try to fix things.” I hope they understand that Grand Wizard doesn’t mean he actually was some kind of Harry Potter wizard. He has no magical powers other than the powers of bigotry and hatred. That is David Duke. That is Louisiana at the moment.

Yeah, you guys had the perfect opportunity to stand up and say, “Look, with all this talk of racism all over the country, with all of these horrible, horrible things we see happening, we’re going to take a stand and show that we will not be as racist as the rest of the Republican Party,” but they failed to do it. Good for you, Louisiana Republicans.