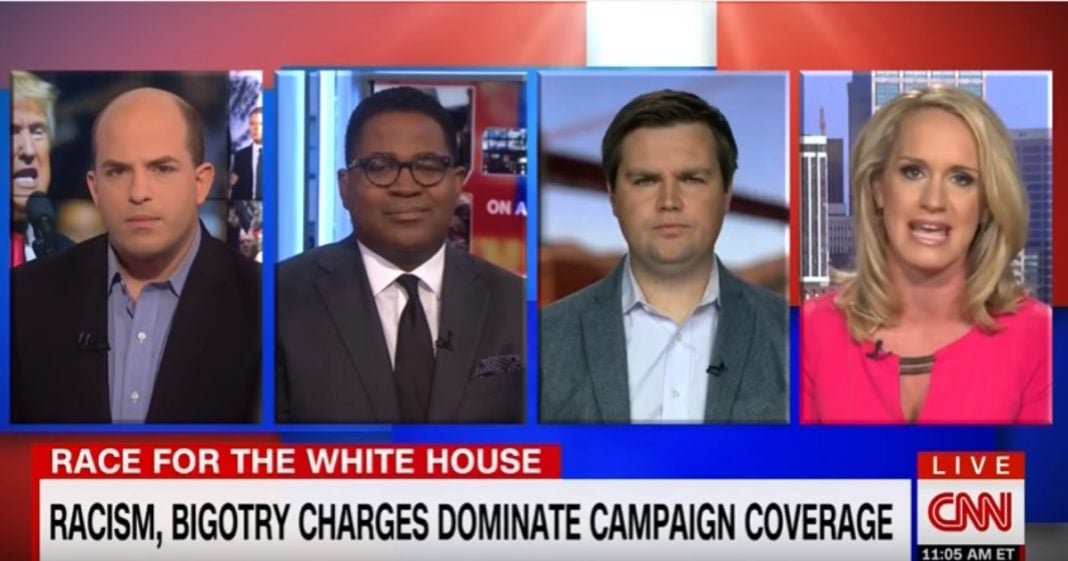 Many have been baffled by Donald Trump’s effort to remove the term “bigot” from himself and place it squarely on the Democratic nominee, wondering how the hateful demagogue can pretend that Clinton is somehow more prejudicial and intolerant than he.

As they always do, Trump surrogates have again come to the rescue, barely surviving the devastating brain aneurysms it takes to imagine up ways to twist the horrific things Trump says into forgivable and even positive statements for the good of the campaign.

This week, Scottie Nell Hughes wins the award for best twist-y-turn-y pivot as she tried to defend the label of “bigot” for Hillary Clinton.

“Bigotry, if you look at the definition, it’s about someone who’s small-minded and sits there and directs hate towards a certain group. Hillary Clinton’s speech [attacking alt-right conservatives] was all about hate towards a group that, while my fellow counterpart might consider them to be very racist, it’s the exact opposite.”

“These are God-fearing, baby-loving, gun-toting, military-supporting, school choice-advocating Americans! And just because maybe there might be some, a part of a very small fringe group [of white supremacists] that read Breitbart — by sitting there and saying the entire website is white supremacy is kind of ridiculous as saying just because you have people that are anarchists and communists that read the Huffington Post, calling that newspaper establishment, [is like] saying that they’re pro-anarchy and they’re against the United States government.”

Except, Hughes, that Huffington Post does not engage in or even dabble in anarchy. Breitbart, on the other hand, has served as the white supremacist, anti-Semetic dog-whistle rag for as long as it has been around.