All of this EpiPen madness has mainstream media wondering what Martin Shkreli, aka “Pharma Bro” has been up to since the last time he deigned to bless us with his douchey presence. As it turns out, all you have to do is say his name a couple of times and he will magically appear from the depths of Twitter to amuse you.

Stephen Colbert discovered this interesting phenomenon over the weekend when, after making a joke about Shkreli on his Friday show, received this low-brow tweet in response.

To any 9th grade boys out there, that was a pretty sick burn, but to the rest of us, it was just a crude and toothless jab.

Colbert’s response proved who the real comedian is and put the Pharma Bro back in his place.

Depends, how much are you marking them up? https://t.co/tWMc3aRvVy

It almost brings a tear to my eye. Colbert, the real American patriot. 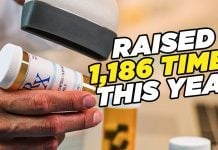