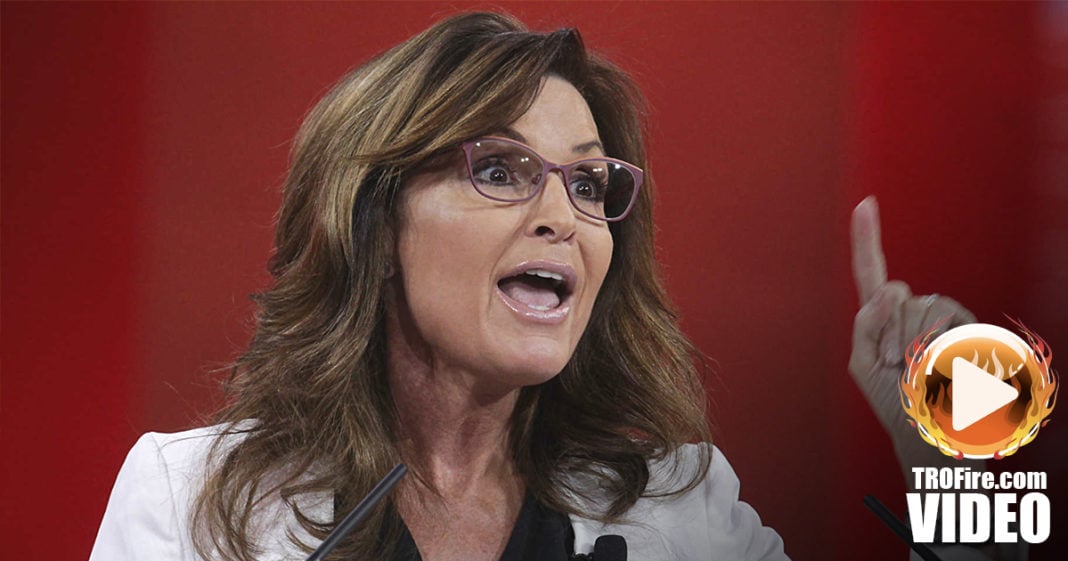 Farron: Donald Trump is having a very bad week. He’s kind of losing some support from some of his most ardent supporters. Take a look at what Sarah Palin had to say on The O’Reilly Factor the other day.

Palin: Well, Candidate Trump didn’t garner a lot of enthusiastic support by being soft on anything but by having a steel spine and doing what he knows that the majority of Americans want and that is to put a stop to illegal immigration. Donald Trump understands that enforcing the laws and building that wall are paramount to what the will of the people is and thank God, he’s still preaching that because if he were not, then there would be a huge erosion of support.

Farron: Now in her, I guess you’d call that a response. It was more of just an incoherent word salad that she threw out there for Eric Bolling. Sarah Palin is basically telling us she’s concerned that Donald Trump is not being hateful enough. She wants to make sure that he’s not only going to build a wall, but once it’s built, take all of the illegal immigrants in the United States and physically throw them over it. That’s what she wants. That’s why Palin and Ann Coulter and Rush Limbaugh have been coming out this week terrified, whining like little babies about the fact that Donald Trump might have suggested that he was too hard when speaking about illegal immigrants in the past.

Now we know from experience, from covering politics for so long and from listening to this idiot speak that Donald Trump has absolutely no intention of softening his rhetoric on illegal immigrants or really anything that he actually hates. He’s not softening. In fact, he has even already said he was soft for a little too long. Now he’s going to start hardening again. That softening lasted about 2 days.

Palin has absolutely no credibility to speak of. The fact that Fox News continues to go to this woman is pure insanity. She is a failed governor, a failed vice presidential candidate, a failed reality TV star. If you look at her family life, she’s not doing much better there for being such a family values conservative. If I were Sarah Palin, I would take a break from the media, take a break from politics, maybe work on your personal life because you seem to have a lot of demons there that you’re not dealing with. You’re hoping that these distractions of being called to do Fox News are enough to kind of keep you away from that. Focus on yourself right now, Sarah Palin, and leave the politics to people who actually understand what they’re talking about.